Healthy Eating By The Mirror 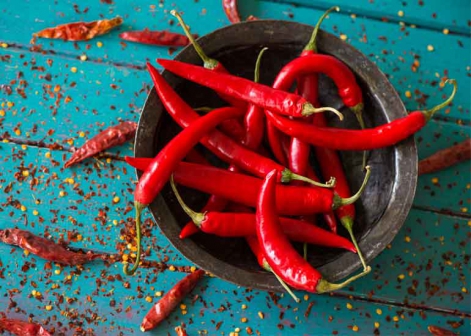 There could be a link between a love for spicy food and a longer life, according to a new study

A red hot chili pepper a day might not be to everyone's taste.

But now there's more reason than ever to put up with the heat and embrace the spice.

There could be a link between a love for spicy food and a longer life , says research from the Public Library of Science journal, PLoS One .

The US study reports that regular consumption of red hot chili peppers could extend your life by 13 per cent, giving the average Brit an extra 10.5 years.

It states that those who consume chilies are 13 per cent less likely to avoid dying early compared to those who avoid them.

More than 16,000 adults were surveyed based on their diets, background and health from 1988 to 1994. Then participants were checked up on over the next 18 years.

People who ate red chilies on regular basis had a mortality rate of under 22 per cent, while those that avoided cooking with them had a rate of over 33 per cent.

Some of the participants might have used red chilies to cook, while others may have bravely eaten them whole.

But what apparently mattered was that they absorbed the special ingredient that gives spicy food its kick.

Capsicum is the cause of both the chili's health benefits and its fiery bite, experts at PLoS say.

This isn't the first time scientists have explored the healing effects of capsicum.

Only last month, scientists from the Ruhr-University in Bochum, Germany, treated human samples of breast cancer cells with the peppery ingredient to find out more about their ability to destroy them.

Chilies have also been used by health fanatics for their supposed ability to speed up fat loss.

Capsicum can allegedly increase the speed the body metabolises fat and protect against bad teeth.

Different types of hot peppers contain pro-A, B and C vitamins, antioxidants and can have inflammatory effects.