When music is a family affair: Gido Kibukosya 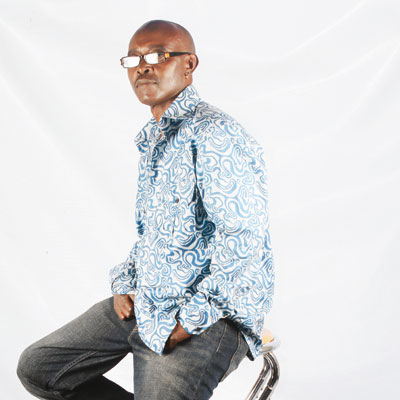 I am the only boy and the seventh born in the family. I grew up in Kakamega and Nairobi, and have nine sisters; when I was five, I moved to Nairobi with my father whom I was very close to due to his musical gift.

I began mu musical journey when I was still very young and piano was my favourite instrument.

You decided to pursue music at a time when music was not seen as a practical career choice, what inspired this?

My father’s musical career inspired my love for music; I had been exposed and had fallen in love with music at a young age, so much so that by the time I was in high school, I had formed a band with five friends called Hypertension back in 1982.

By the time I was clearing my Form Six, I knew I wanted to pursue music as a career.

We are now singing the Kenya @ 50 song… but it must be a special moment for you now that you are 53, three years older than Kenya’s independence, how will you be celebrating?

I will be reminiscing on how time has passed and asking God for another 50 years to share my knowledge and gift of music.

Did you ever attend any Jamhuri Day celebrations with your dad Peter Kibukosya, one of the five composers of the National Anthem?

Yes I did in 1966, and it is one of my best childhood memories. I will never forget the moment the flag was raised.

Where did you go to school?

I went to St George’s Primary School and St Mary’s in Nairobi thereafter.

Our band -Hypertension was noticed by Ayub Ogada of African Heritage. He took three of us and in 1987, I joined African Heritage. We got a lot of exposure and even got to tour Europe, but in 1989 we broke up amicably. Life was changing and people were going in different directions; some left the country, others got married, while others ventured in different kind of music. However, by the time the group was breaking up, I had developed a keen interest in sound engineering.

You were also a member of the Musically Speaking band, when did you join the group?

I joined after leaving African Heritage. At Musically Speaking, I grew as a music engineer both through experience and a course I did in the USA. In 1989, we received a three-month scholarship from USaid to go to the US to study the music industry under a programme called Training for Development.

There, I did a course at University of California, Los Angeles (UCLA) in Sound Engineering. It was a great experience, we not only got to learn a lot about the music industry, but also met big stars like Glenn Ballad, Tracy Chapman, Clive Davis, Baby Face , U2 and Eddie Murphy among others.

You have played a big role in shaping the country’s music industry, tell us about that?

I came up with Samawati Productions company that signed some of the pioneers of today’s local industry. Some of the names we signed and worked with include: Bruce Odhiambo, Ted Josiah, Kasongo wa Kanema, Juma Kayamba, K- South Flavour, Mercy Myra, Harry Kimani and Five Alive; they played a big role in paving the way for artistes today.

You and your former wife Suzzanne Gachukia were a music power house couple back in the day, tell us about that?

I got married to Suzanne in 1991. We just clicked, we had the same dreams and goals, we loved music, and had chemistry. I understood her and she understood me. We, however, separated in 2007 after being married for 20 years. It was not easy, no one gets married thinking that it will end but it happened; but we are still good friends.

You are also a father; tell us about your children?

I have five children, Yvonne, Krystal, Peter, Marcus and Miles. I am very proud of my children, and if there is one important lesson I hope I have imparted as a father to them is that they should learn to love and give.

In 2011, your daughter Yvonne married her long time sweetheart Raila Odinga’s Son, Raila Junior, how was the experience walking your daughter down the aisle?

It is a bittersweet moment. As father, you always see your daughter as your little girl but at the same time you are happy when she finds someone she loves, and wants to share her life with.

Your son Marcus is in the popular rap group Camp Mulla, did you introduce him to music?

Marcus does not know it, but I have one of the first single, which he did, when he was just starting off at Hillcrest (smiles). I am proud of my son, and just like my father did for me, I exposed my children to music when they were still young. Having been in the music industry for a long time I know how important it is to be a versatile artiste and that is why I always encourage my son to not only rely on rapping, but also master other areas of music. I have been training him in music production and he is giving me a run for my money in sound production.

We don’t hear much a bout you nowadays, what are you up to?

I am consulting at Creative Hub Productions, a media production company that has its hands in all things media. I love it here because it is a space where creative minds like me are able to strive. I consult as a music producer and I am working with the young and talented Kenyans.

You went to rehab last year, tell us about that?

I went to rehab early last year for three months after my youngest sons convinced me to. I have been sober for 15 months now and I am glad.

Any advice for others struggling with addiction?

To get over an addiction, you need spiritual power and the support of your family. An addiction does not just affect one person, but the whole family. That is why I believe it is important, especially for the family to go for counselling; it helps to bring about understanding and healing.

You still wear your studs… don’t you think it’s a bit awkward now?

They represent me. I first put an earring when I was in high school, and I have never removed them.

What do you think of today’s local producers?

A lot of people call themselves producers yet they cannot even play an instrument. We have forgotten our roots. We should go back to the days when a song was released, it lived on years after.

Are you implying that the industry could do better?

It has not grown that much due to the fact that there is too much computer generated music. People need to learn to play instruments and sing.

What are your future plans?

When you cross over into 50, you start looking at life differently. There is more to life, and while you look back on your life and reminisce, you also want to make a difference. I want to get the Kibukosya music foundation in Kakamega running; there is a lot of talent there, and I feel that I can make a difference by giving back what was imparted to me.