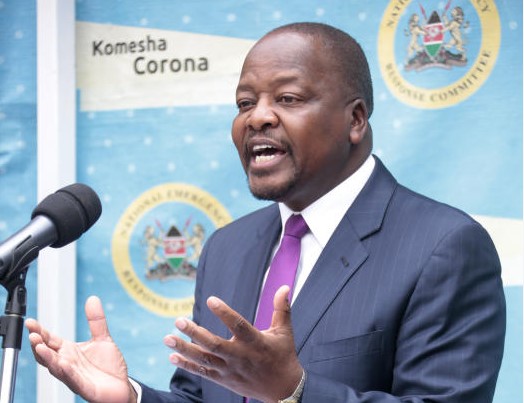 Some two hundred and ninety-eight people have tested positive for the coronavirus today, from a 6,451 sample size conducted in the last 24 hours.

Statistics from the Health Ministry also indicate that three hundred and ninety-nine patients have recovered from the disease, “with 379 discharged from the Home-Based Isolation and Care program while twenty were from various health facilities countrywide,” Health CS Mutahi Kagwe (pictured) said in a statement Saturday.

The country has also lost three patients to the disease, all being late deaths reported after conducting facility record audits in September.

Further, “953 patients are currently admitted in various health facilities countrywide, while 2,055 are under the Home-Based Isolation and Care program. Fifty-six patients are in the ICU, and nine in High Dependency Units (HDU).

On vaccination, Kenya has so far administered a total of 3,860,780 vaccines countrywide.

Only 3.4 per cent of the adult population is fully inoculated.