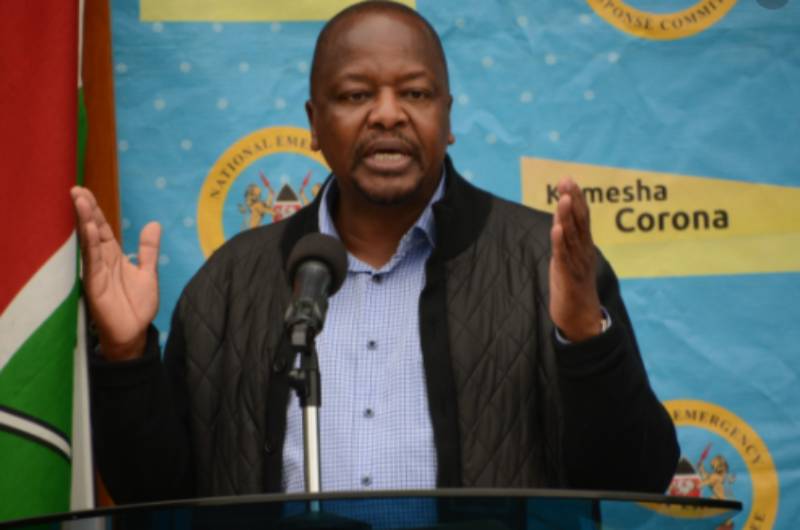 The Ministry of Health on Saturday recorded some 548 new coronavirus infections and four additional deaths.

In a statement by the Cabinet Secretary Mutahi Kagwe (pictured), the ministry said the total confirmed cases had risen to 91,526 after it tested some 6,953 people in the past 24 hours.

Additionally, the fatalities have now risen to 1,586.

From the new cases, 520 are Kenyans while 28 are foreigners.

“The youngest infected person is a five-year-old infant, while the oldest is 96-years-old,” read part of the statement.

Fortunately, 1,017 patients have recovered from the disease, 980 from the HomeBased Care Program, while 37 have been discharged from various hospitals. Total recoveries now stand at 72,596.

Other counties that reported cases are Mombasa 27, Turkana 20, Kajiado 18,

The Ministry further said, there are 982 patients admitted in various health facilities countrywide with 6,782 on Home Based Isolation and Care. 44 patients are in Intensive Care Units (ICU), 27 of whom are on ventilatory support, and 15 on supplemental oxygen. Two are on observation.

“Another 47 patients are separately on supplementary oxygen out of whom 38 are in the general wards. 9 are in the High Dependency Unit (HDU),” it said.

By STEPHEN NZIOKA | 2h ago

By FREDRICK KAGONYE | 17h ago