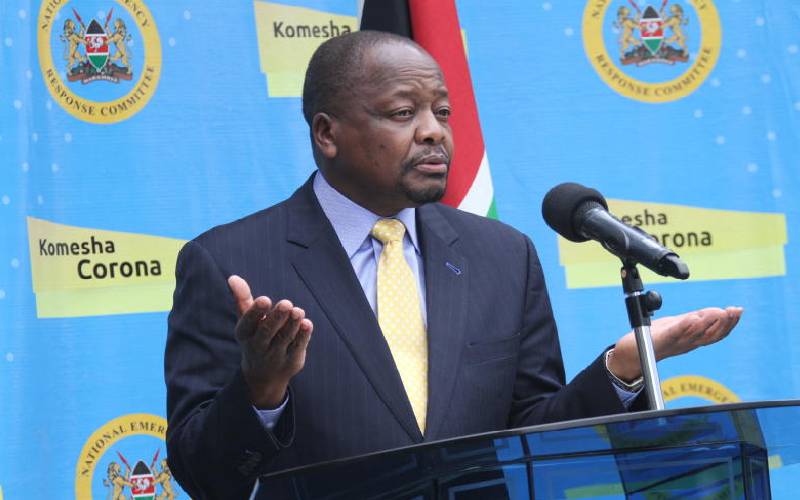 Kenya has recorded 631 more Covid-19 positive cases in the past 24 hours raising the country's total caseload to 47, 843.

In a statement sent to media houses by the Ministry of Health on Friday, Health Cabinet Secretary Mutahi Kagwe (pictured) said the new cases are from 6,142 samples which push the country’s cumulative tests to 646, 367.

In terms of gender, 420 are male and 211 are female while the youngest case is one-year-old and the oldest is aged 91.

Of the new cases, 596 are Kenyans while 35 are foreigners.

On a positive note, 371 patients recovered with 313 on the home-based care programme while 58 were discharged from various hospitals bringing the total number of recoveries to 33,421.

On a sad note, Kagwe said 14 patients have succumbed to the disease bringing Kenya’s fatalities to 884.

There are 20 patients in the Intensive Care Unit (ICU), 59 on supplementary oxygen and 16 in the High Dependency Unit (HDU).

Meanwhile, 1,700 inmates have so far tested positive for Covid-19 since the country recorded its first case in March.

Kenya Prisons Commissioner General Wycliffe Ogalo told the Senate Health Committee on Friday that 700 inmates have recovered from the disease while three have succumbed to the virus.

During the committee meeting, Interior CAS Hussein Dado was hard-pressed to explain the general state of preparedness to deal with the disease in correctional facilities in the country.