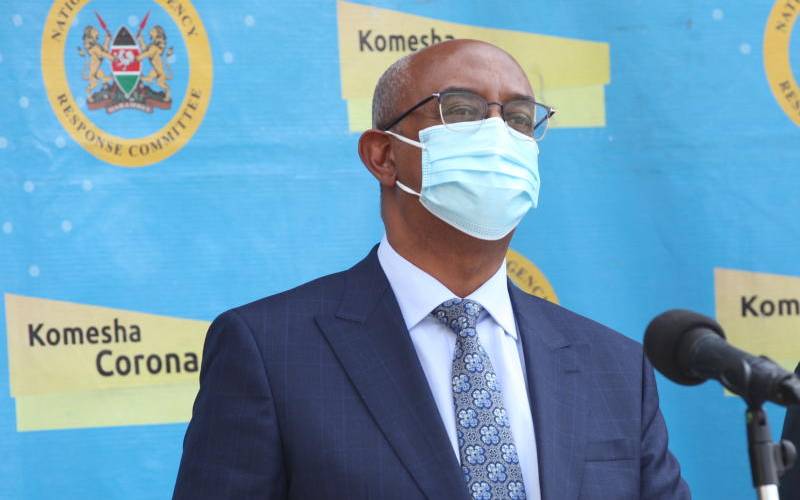 Tobacco users have been urged to prioritise their health to avoid severe illness in case they get infected by Covid-19.

In a daily coronavirus update, in Nairobi, Health Chief Administrative Secretary Dr Rashid Aman (pictured above) sounded an alarm to the smokers saying the habit could be a death trap as far as Covid-19 infection is concerned.

Dr Aman said that all forms of tobacco are dangerous and therefore the users should not think that they are safer when using them in different forms like chewing gum or shisha.

He said that many tobacco users have fallen in the trap of dishonest companies and promoters who have given false information alluding that some tobacco products are safer.

“These products have been deceptively promoted as less harmful. Currently, there is no enough evidence to show that they are less harmful than conventional cigarettes,” the CAS said.

According to Dr Aman, most tobacco users have chronic coughs which may increase their fragility to falling severely ill or easily infecting people around them.

Meanwhile, the country has registered fresh 114 coronavirus cases over the past 24 hours after testing of 1,682 samples. This takes the overall caseload to 34,315 since the first case on March 13, 2020.

Of the new cases, only one of them was a foreign national. There were 93 males and 21 females.

Also, 318 patients recovered from the virus, with 263 coming from home-based care and the remaining 55 from various designated treatment facilities.

This takes the number of recoveries to 20,211. The country registered no new deaths. This implies that the number of deaths still stands at 577.

On Monday, the World Health Organisation (WHO) issued a statement saying that Kenya misjudged its coronavirus epidemiological behaviour after the Ministry of Health hinted at a possibility of a flattening curve due to reduced new cases.

“The problem is we have been testing few cases and also contact tracing has been declining,” he said. “We might be (flattening the curve) but we cannot be certain that the cases are declining. We do not have sufficient data to verify this,” said a statement issued by WHO Kenya representative Dr Rudi Eggers.

President Uhuru Kenyatta urged for caution during the virtual intergovernmental conference on Monday. The President said that even though the curve seemed to be flattening, there was a need to continue following the health protocols to avoid a surge in infections.

“I believe we have done remarkably well, and that is why we have begun to flatten the curve …but we must rather celebrate with a great deal of caution,” he said.

Adding: “This is the most dangerous point as the curve can either flatten completely and deescalate or take an upward surge,” he said.

During the Tuesday briefing, Dr Aman reiterated sentiments of the President saying that Kenyans should not disregard the health rules due to low numbers.

The CAS further revealed that their judgment that the curve was falling was based on the decreasing numbers from various counties in the country, which gave similar patterns.