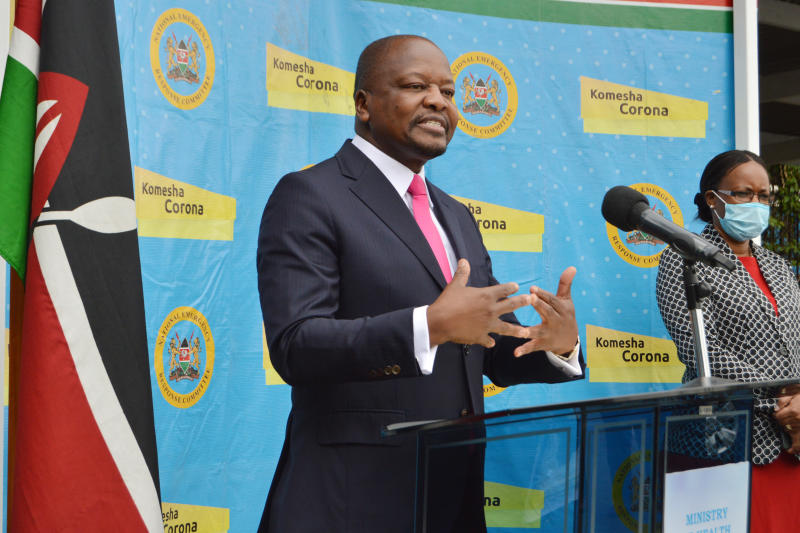 Coronavirus cases registered in the country have risen to 23,873, after 671 people tested positive for the virus, Health Cabinet Secretary Mutahi Kagwe (pictured) said on Wednesday.

Additionally, another three people have died, bringing the national death toll to 391.

The Mutahi Kagwe- led Ministry said it had tested 6,200 samples in the last 24 hours, which now brings cumulative tests to 329,123, since the first case was reported on March 13.

633 of the new cases are Kenyans and 38 are foreigners.

Males continue to lead the curve, registering 423 others and 258 females.

The youngest is a three-year-old and the oldest is a 94-year-old patient.

Of the new cases, the CS noted that Nairobi continued to lead with 376 cases, most of them from Dagoretti, Kiambu registered 112 cases, Machakos-20, Kisumu-16 and Mombasa had six cases.

At the same time, 603 patients had recovered from the virus, out of which 403 were under the home-based care program while the rest had been discharged from various health facilities. This brings the number of all recoveries in the country to 9,330.

Speaking at Kenyatta University Teaching, Referral and Research Hospital where he launched 500 beds, 60 HDU and ICU beds, Kagwe said despite the many positive cases, the country’s health system is not yet overwhelmed as many have speculated.

The hospital now has 1,150 beds, 150 of which will be used for cancer patients while the rest will be used by Covid-19 patients.

The increased capacity, according to Kagwe, will play a huge role in building capacity to combat the virus.

"When you wear your face mask and adhere to Covid-19 protocols, you slow the spread of the disease so that our health system is not overwhelmed," Kagwe said.

He revealed that two healthcare workers had died of Covid-19, “This is like losing soldiers in the middle of a battle. We urge the county government to listen to any complaints, murmurs, concerns from healthcare workers with a view of addressing them in the soonest possible time.”

He added that funding to county governments had been increased in order to hire more health workers and personnel in the wake of this pandemic.

By Tuesday, the global death toll from Covid-19 was at 705,029, according to Worldometer.

Reuters reported that nearly 5,900 people are dying every 24 hours from the virus on average, according to calculations based on data from the past two weeks.

As of Tuesday, according to Reuters tally, Latin America surpassed Europe continent to become the region with the highest Covid-19 death toll. The region has recorded more than 206,000 deaths, approximately.

Brazil, which is the most affected country has 95,819 coronavirus-related deaths and Mexico recorded 48,869 deaths on Tuesday.