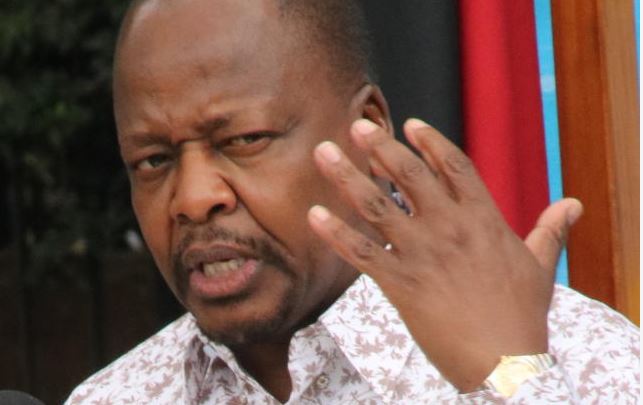 Governors have two weeks to each get 300 isolation beds ready as the government reported 167 new Covid-19 cases, the highest tally so far.

The biggest figure had been 147 coronavirus positive cases, reported on May 28, after 2,831 samples were tested. The latest cases are from nearly a similar number of samples - 2,833.

It was also a day Kenya recorded the second-highest number of recoveries after 46 other patients tested negative for Covid-19, to bring the number of people who have beaten the virus to 752.

The biggest number of recoveries - 54 patients -  was reported on June 3.

Health CS Mutahi Kagwe (pictured) released the new statistics a day after the government extended curfews and lockdowns meant to help curb spread of the disease.

On Saturday, President Uhuru Kenyatta announced lifting of the cessation of a movement order on residents of Eastleigh, in Nairobi, and Old Town in Mombasa. He also announced an adjustment to curfew hours that will now run from 9pm to 4am. The earlier timings were 7pm to 5am.

Yesterday, Kagwe gave counties two weeks to put the necessary bed capacity in place as ordered by the president. The CS also advised county emergency response committees to convene a meeting to that effect. The meeting is expected to be held today.

The CS said counties should take advantage of the delay in reopening of the country to ensure adequate amenities to handle the disease.

“It is very important we do this otherwise, the extension by the President will not achieve much,” said Kagwe.

He said the Sh5 billion conditional grant to counties to boost Covid-19 preparedness has already been disbursed and that counties should utilise the money for the intended purpose only.

Kagwe said the pattern of the disease from the daily tallies shows it is widely spreading to counties, especially in rural areas.

For example, in yesterday’s brief, Busia had 28 cases bringing the number of cases in the county to 206.

“In the case of Busia, these are essentially truck drivers. We are going to have direct government interventions in the county,” said Kagwe.

In total, Kenya has recorded 2,767 cases of coronavirus spread across 36 counties.

“This is why counties should take responsibility,” said the CS. "This disease will be a test of health as a devolved function.”

Kagwe said investment from the Sh5 billion given to counties will also determine the effectiveness of the expected home-based care programme for Covid-19 patients.

He noted that some counties, with the help of Nyumba Kumi Initiative teams, are already doing a great job where any new person in an area is required to quarantine themselves.

Kagwe said while the 300 isolation beds per county is the minimum, some counties already have more, which is commendable.