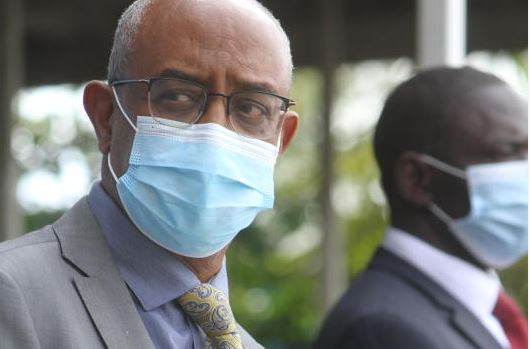 The government has sent warning shots to people moving from high-risk areas to neighbouring communities, as coronavirus cases in the country rise to 607.

In his daily briefing of the Covid-19 status in the country, Health CAS Rashid Aman (pictured) noted that some residents of Nairobi’s Eastleigh and Old Town in Mombasa were moving to other neighbouring towns since the cessation of movement in the two towns was announced.

“We have observed that some people have decided to sneak out of these areas and into neighbouring communities. This move is irresponsible,” Dr Aman said.

The Health CAS added that they had received reports that Eastleigh residents were moving into South B and South C estates and other neighbouring communities, saying that action will be taken against the culprits.

Today, the country has recorded 25 new coronavirus cases, bringing the national tally to 607.

The Ministry of Health says it has tested 632 samples in the last 24 hours.

22 of the new cases are Kenyans, one a Ugandan, one Tanzanian, and another a Chinese national.

17 of those are from Nairobi, 2 cases from Wajir, and one each from Mombasa, Isiolo and Nakuru counties. Isiolo now joins the list of counties with confirmed cases of Covid-19.

The health ministry has also discharged seven patients, bringing recoveries in the country to 197.

Three other people have succumbed to the disease, bringing the total number of deaths to 29.

Twenty-one of the new cases are males, while four are females, adding to a growing pattern where males are more than females.

The Government also says it has made plans to evacuate Kenyans who had travelled to India for treatment. The batch is expected to land into the country this evening at the Jomo Kenyatta International Airport (JKIA), in Nairobi.

From there, the staff at the Health Ministry will facilitate their arrival and subsequent quarantine in their homes.

The Health CAS has emphasised that all cross-border truck drivers be tested at the point of origin of their journey and obtain a corona-free certificate.

Yesterday, Government locked down Nairobi’s Eastleigh and Mombasa Old Town for a period of 15 days.

The two towns have been marked as hotspots after the high cases of coronavirus were reported from the two urban sections.

Traffic jams into Eastleigh were witnessed yesterday evening as residents rushed to beat the 7pm deadline.

Eastleigh now has 77 confirmed cases becoming the area with most infections in Kenya while Old Town, Mombasa, has 57 cases.

Governors back health for all plan
Health & Science - By Benard Sanga

Governors back health for all plan
Health & Science - By Benard Sanga