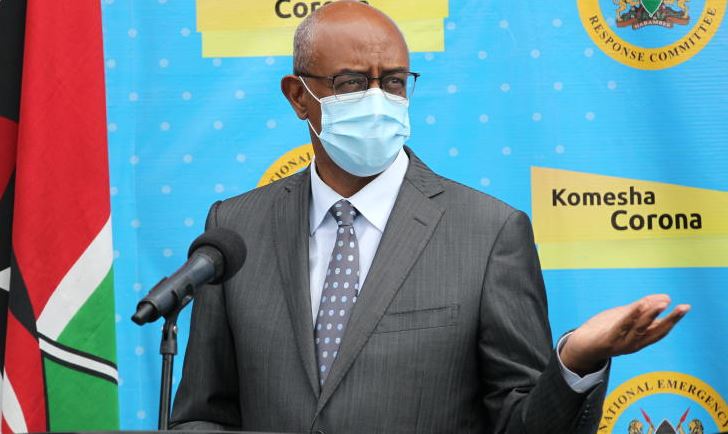 Kenya has registered 30 new coronavirus infections, the highest number of confirmed cases since the disease was first reported mid-March.

The national tally is now at 465 cases.

The Health Ministry said it had tested 883 samples in the last 24 hours, of which 30 turned positive.

Twenty-three of the new cases are males and seven are females, and range between four and 64 years old.

According to Health CAS Rashid Aman (pictured), 19 of the cases are from Mombasa County, eight in Nairobi, two in Bungoma, and one case in Kitui County.

Bungoma now joins a growing list of counties in the country with confirmed cases of Covid-19, bringing the total to 16 counties.

The Nairobi cases are distributed as follows: Kawangawre-2, Eastleigh-5, and Kibera-1

The Health Ministry has expressed concern with low turnout of the mass testing exercise across the country.

For instance, in Nairobi’s Kawangware area which has been identified as a hotspot, only 803 people were tested against a daily target of 2000.

Aman advised that if the country is to flatten the curve and reduce infections, then Kenyans have to turn up in large numbers for testing, which is being conducted for free.

“The Ministry of Health has acquired the capacity to undertake targeted testing but the willingness of the people to be tested is low. I want to appeal to Kenyans to willingly come forward to be tested,” the CAS said.

He also warned of a worrying trend where some Kenyans have completely ignored the ministry’s guidelines in preventing the fast spread of the disease, and are returning to work, not wearing masks while in public places and disobeying curfew rules.

“We have noted with dismay the casual attitude with which some of our people are not observing these measures. We have observed that some eateries are not only operating without any regard to the social distancing requirement but also deep into curfew hours,” Aman continued.

This laxity has prompted the government to come up with more stringent measures that will ensure Kenyans obey the rules.

As such, individuals arrested for breaking curfew rules will no longer be accommodated at government facilities, but at a curfew breakers holding facility, overseen by the Inspector General of Police Hillary Mutyambai.

The government has also extended schools closure for another month effective tomorrow (May 4) up to June 4, 2020.

Previous article
Has Paul Pogba changed his mind on leaving Man United?
Next article
Pregnancy made me hate my husband's voice, cooking