RELATIONSHIPS
By KIRSTEN KANJA | 1 month ago 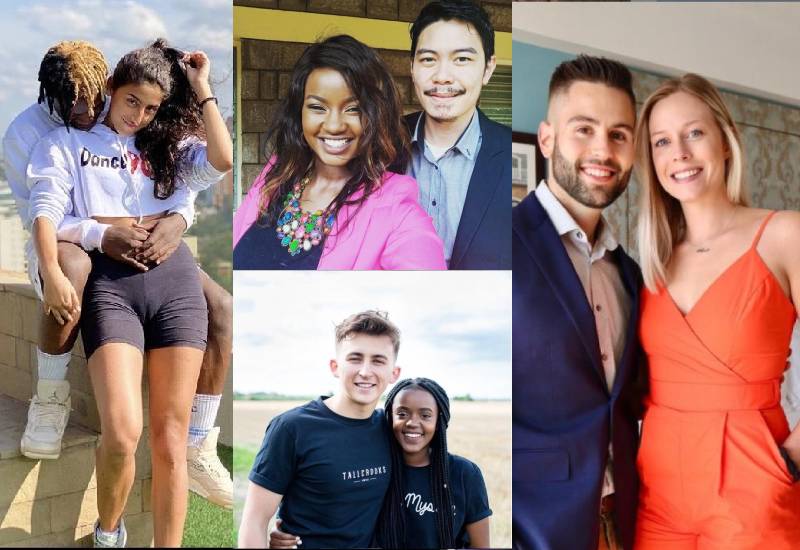 Nurturing a romantic relationship is not easy — and it’s harder when the world is watching you and weighing your chances of staying together. But what happens when the camera is switched off and it’s just the two of you again?

The love season is here with us, indeed, it is evident. Roses are being ferried across the city, ladies here and there are daringly wearing red and couples, depending on the nature and personality of their relationships, examining whether this is a season to celebrate their love or skip it altogether.

It is a time when the perfect outfit must be selected for dinner, when the mood must be romantic, and lots of expectation is in the air.

Sweet as it is, it may also be bitter if lovebirds are not on the same page about this lovers’ day. When all goes well, the day is just but another for happy couples to remind each other of their feelings towards each other, share their affection and make each other feel extra special.

After all, “being loved deeply by someone gives you strength, while loving someone deeply gives you courage,” so said Chinese philosopher Lao Tzu.

To mark the special day, Eve compiled a list of some of our favourite video couples, many of whom share a part of their lives and relationships on YouTube and other social media platforms. 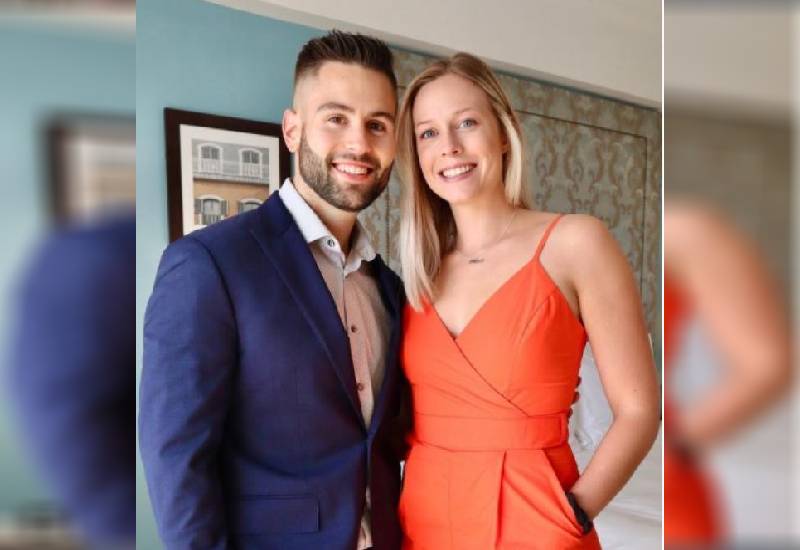 Theirs is a love story born in Canada and moved to Kenya. The Manis are an ever-bubbly pair that took a risk by selling what they had and packing up, leaving everything they did before to experience adventures together through travel. The married couple has now made Kenya their home.

When Eve spoke to Dave, who also responded on behalf of his wife Tracey, he was as friendly and good-natured as he appears on the vlogs shared weekly on their YouTube channel. He notes reminiscently that the two met through a dating app in 2015, and fell in love after a little communication and a meet up.

“The rest is history,” said Dave.

He explained that, about two years ago, they decided to live a unique experience by moving to a different country.

“From there, we really wanted to document our experience, mainly for our friends and family, but also discovered that we loved making videos. Kenya is a beautiful country but is not always pictured as such and we made it our mission to shed some more positive light and show the good side of it,” said Dave.

The couple did not expect that their audience would grow so rapidly after they started documenting their experiences. Now, their channel, Dave Mani, has over 1.4 million views and over 30,000 subscribers.

Dave and Tracey have a huge Kenyan following, and their fans love them for sharing the good parts of the country with the rest of the world, changing the negative perception than many people have regarding Kenya and other African countries.

On what keeps them going, Dave said that putting the camera down every now and then to focus on themselves as a couple is an important part of prioritising and nurturing the relationship.

“We are definitely friends first! And the fact that we can share our passion for travel and experience it every single week created a special bond between us,” said Dave. 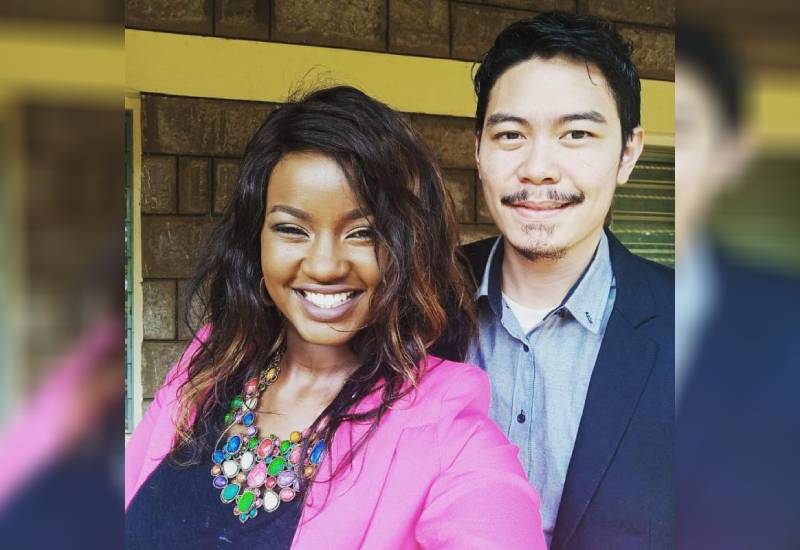 This Kenyan-Philippine duo have said in past interviews that they met in what many consider an unconventional way.

Late last year, Liz and Solomon told Joyce Omondi, then of Switch TV, that theirs was an arranged marriage, with Liz admitting that she was not in love at the time of their nuptials.

“My parents have been in missionary work in Kenya for years, and it just so happened that they were working with her family. One day my mother told her mother that it would be a good idea if we got married, that’s how it all started. All my siblings have been in arranged marriages, so for me it was easy to accept; for Liz it would need adjustment,” said Solomon during the interview late last year.

Liz, who has been a pastor for 13 years broke up with Solomon at some point during their engagement, feeling that he was not taking time to get to know her more. After the break-up, a determined Solomon pursued Liz until she opened up to a future with him again.

“We didn’t meet, our parents arranged our marriage before we even met each other,” said Liz during an interview with Eve. “We were strangers when we got married. So discovering new things about each other and choosing to fall in love with one another daily is what keeps us going. It’s like a treasure hunt we never get tired of,” she said.

The pair said that in the beginning, they were not each other’s usual types, however, what started out in hesitation is now a happy family life, with the pair having been married for over six years, with three young children.

Their YouTube channel, We Are Ocampo now has 3.4 million views, with nearly 58,000 subscribers who enjoy watching the couple. Now more in love more than ever, navigating through everyday life after coming together through an arranged marriage.

“Our YouTube channel was inspired by the lockdown and the shutdown of churches. We are both full time pastors and when churches were closed we looked for ways to continue to minister and speak to others the gospel of Jesus Christ,” said Liz.

“We do face challenges for being an interracial couple. But first and foremost we face them together. Our cultures are totally different and finding the balance and compromise is quite challenging at times. Also, to the world, we are not everybody’s cup of tea, some black people believe my wife belongs to a black man and the reverse is also true. We just pray one day the world will view people beyond their race or colour,” said Solomon.

The Ocampos admit that marriage is hard work, as they discovered when they got into it.

“You have to be intentional about making it beautiful and blissful. It takes work but it’s worth it,” the pair agreed. 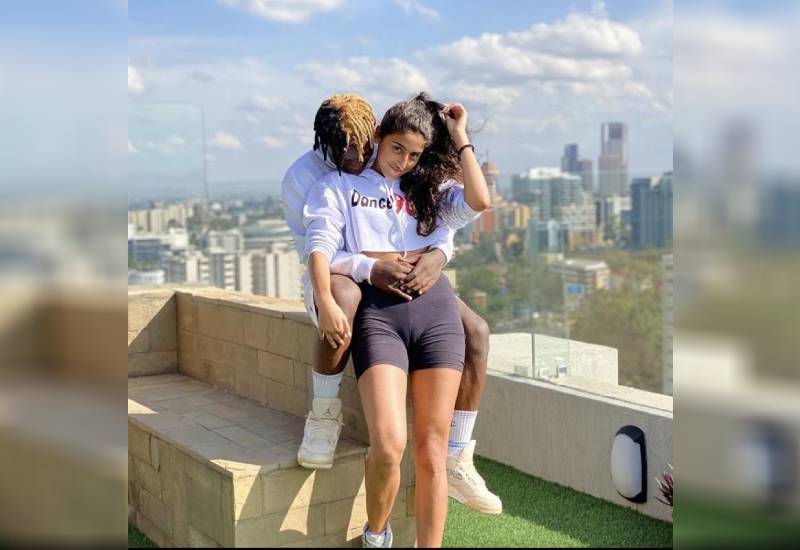 Remember a time when a viral dancing video of a fit Kenyan man and his beautiful Spanish partner popped up on your screen? That was probably Tileh, who goes by the name Tileh Pacbro, and his longtime girlfriend, Martina Glez.

The adorable and youthful couple are professional dancers and have a massive following on social media. Their choreographed dance moves take their fans by a storm each time, with their acts popularising both local and international hit songs through their various platforms.

They share a passion for dancing and an undeniable chemistry on and off the dance floor.

On how they met, the couple tells a modern-day fairytale, where a direct message on social media kicked things off.

“Martina DM’d me for a dance class when my dance academy was relatively new. After speaking for a few weeks online, we decided to meet. As soon as I saw her, I knew I was done being single,” Tileh told Eve.

Tileh was already a social media guru, making income online at the time their relationship started, with his own 300,000 subscribers. Once they were together, they decided to start a channel as a couple, Tileh and Martina, to broaden their income sources as well as share their love with their fans.

“Apart from the love that brought us together, we have the same goals and ambitions that we work together towards,” the couple affirmed.

The pair also said that it is not easy being in an interracial relationship, as there are many ignorant comments and jabs thrown at them too often.

“The challenge we face as an interracial pair is majorly being bullied from both sides. There are a lot of misconceptions about our relationship because of the colour issue, like people thinking that because I am dating a ‘white girl’ my rent is automatically paid. Others on her side think she is with me because I ‘must be great in the bedroom’,” said Tileh.

The couple, young and in love said that they may not have much advice to offer other couples, but if they had to, they would urge lovers to prioritise open and honest communication in the relationship.

“Talk about everything, give each other an environment to speak your minds and hearts without consequences. Don’t let your partner sleep angry or sad, set goals and go after them together,” said Tileh.

The couple’s shared channel has a staggering 10.4 million views on YouTube and over 80,000 loyal subscribers. 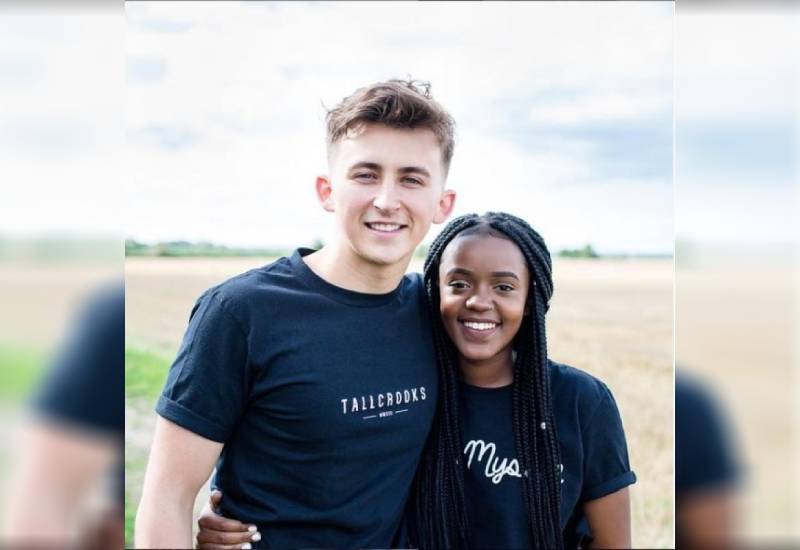 James and Kimmy are another stunning interracial pair, with Kimmy Kimani having her roots in Kenya and James Hobbs hailing from the United Kingdom.

The couple, who recently got engaged have been together for about five years, and are quite young, being in their mid-20s. They are based in London.

As is increasingly common nowadays, their coming together was also aided by social media and the digital era we live in.

“My friend and I were on Snapchat, then suddenly I got an add from him -- someone I didn’t know at the time. I didn’t pay it much attention. One time, I posted something, one of my favourite quotes. What he said absolutely blew my mind. It was something I would say. From that point he had all my attention,” revealed Kimmy in their how we met “story time” video on YouTube back in 2017.

James said that he saw her picture and loved how she looked, describing her afro hairdo as one of the features he found strikingly beautiful.

“We were friends for around four months before we started dating,” said James.

Their fans enjoy watching the pair growing up together through major milestones in life, like dating, moving in together, purchasing a home and getting engaged.

Their different birthplaces and races make them all the more intriguing for those who aspire to be in such a union. They also have a big Christian following, seeing that they are also open about being religious and of the faith.

They are also consistent in their YouTube activity, keeping their fans close with uploads twice a week on their channel, James and Kimmy.

They have over 14 million views on YouTube and nearly 170,000 subscribers.

How to have a better relationship

When you fall in love, the desire for companionship, emotional intimacy and a sense of belonging take center stage. It is a powerful 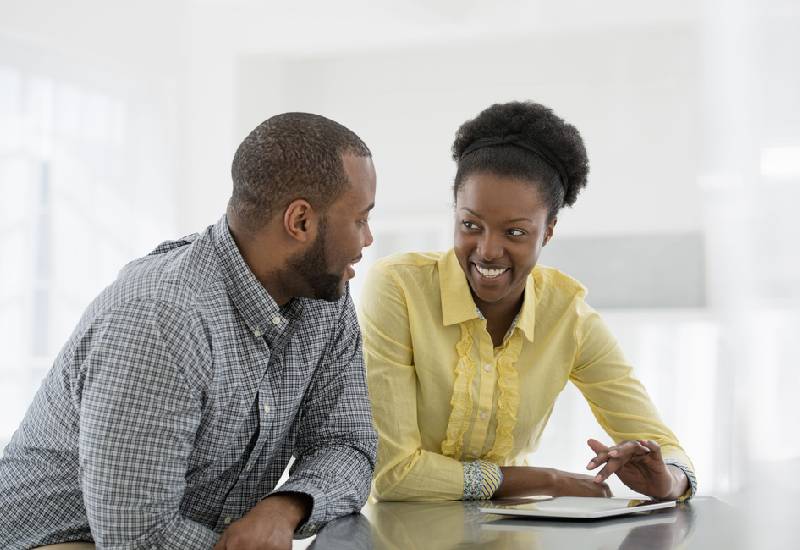 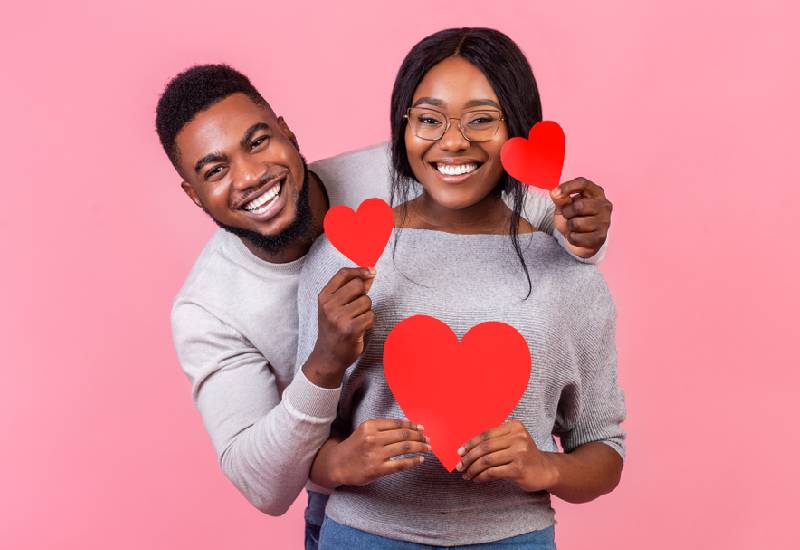 By ESTHER MUCHENE | 5h ago 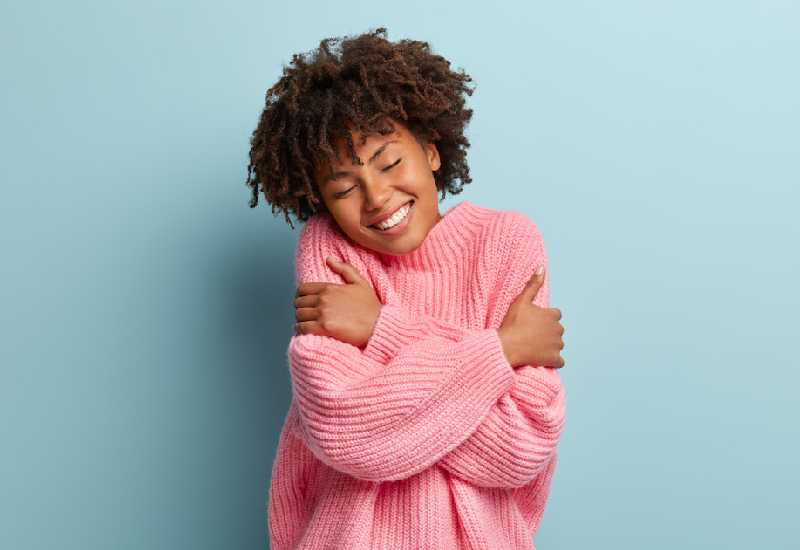 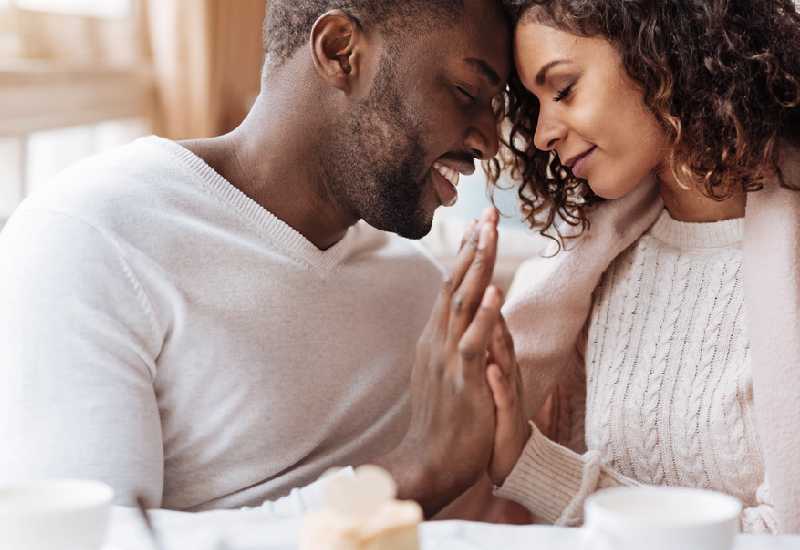