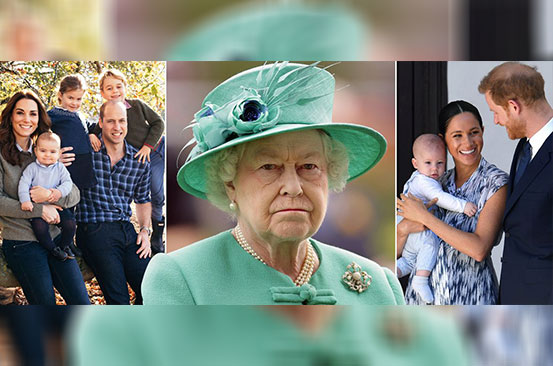 The last two years have changed the royal family forever.

Nobody could have predicted the upset, anger and controversy ahead when Prince Harry and Meghan Markle shared their first kiss as husband and wife on their wedding day, as the Queen, Duke and Duchess of Cambridge and the rest of the world watched on.

But in a matter of months the Sussexes had quit their royal lives, leaving their loved ones upset and angry, and the long-standing strained relationship between Harry and William got even worse.

A new book about The Firm, written by a very well-connected and experienced biographer who acts as advisor on Netflix's The Crown, claims to lift the lid on life behind palace walls.

Robert Lacey's Battle of Brothers is the second huge royal book released this year, and offers a rather different tale to Omid Scobie and Carolyn Durand's Finding Freedom, which told Meghan and Harry's side of the 'Megxit' story.

While Lacey's book mainly focuses on the Wales brothers, William and Harry, it shares insights into the whole family including the Queen, Duchess of Cambridge and Meghan Markle.

It gives a new take on the now infamous 'what Meghan wants, Meghan gets' tiara incident and offers Lacey's views on the royal family's key failures when it came to welcoming the American actress into the fold.

On the day the new bombshell book hits the shelves, we've taken a look through some of the most explosive claims on its pages.

Queen's reply to Harry's 'what Meghan wants, Meghan gets' comment

There have been countless accounts of the day Meghan met with the Queen to pick out her wedding day tiara, and Lacey offers yet another take.

Everyone seems to agree that Meghan wasn't allowed to have her first choice of glittering headwear, and Battle of Brothers explains why.

Harry was far from impressed, and reportedly said 'what Meghan wants, Meghan gets' - but his grandmother wasn't impressed.

Lacey claims the Queen responded: "Meghan cannot have whatever she wants. She gets the tiara that she's given by me."

When Meghan was asked to appear on the front cover of Vogue magazine, just as the Duchess of Cambridge and Princess Diana have done, she was touched by the offer but had another idea.

Rather than just agreeing to a photoshoot, she asked if she could guest edit - and spent months working with the team to create her Forces of Change edition.

But Lacey claims the royals weren't best pleased with the content, much of it far from impartial, and William and Harry had a "showdown" when they tried to discuss it.

He claims that nobody knows exactly what happened, but described it as "another classic Harry explosion, followed by a further, even deeper rift".

He also suggests that after their firm words, Harry and Meghan decided not to join the Cambridges and the rest of the royals for their annual summer holiday to Balmoral.

Prince Charles reassured Harry that he is his dad, not James Hewitt

For much of Harry's life, there have been cruel, untrue stories that Diana's friend James Hewitt is in fact his 'real' father.

According to Lacey, Charles sat down with his youngest son to address the subject and to make sure he knew it was a lie.

"Charles's concern was to reassure his son 'that without doubt he and not Hewitt was his father' - and presumably Charles emphasised how the calendar made the rumour quite impossible since Hewitt had not met Diana until two years after Harry's birth."

According to the book, Harry "listened carefully" but "didn't say a word either while his father was talking, or when he had finished".

William refused to have lunch with Harry ahead of Sandringham Summit

After Meghan and Harry dropped their life-changing quitting statement on social media, they had to work out the logistics.

The Queen summoned her grandson, along with Charles and William, to Sandringham to sit down and talk everything through.

However, Lacey claims William was still furious at his brother's actions, and denied an invitation to have lunch as a family before they started talking business.

He writes: "The Queen had suggested the family should gather for lunch before their big pow-wow in the library that afternoon, but he refused his grandmother’s invitation.

"He would obviously turn up at 2pm for the meeting, he said, but he only wanted to talk business.

"The Prince himself has not confirmed his friends’ speculation that he was so furious with his younger brother that he would not be able to endure the hypocrisy of smiling at him over lunch."

Meghan and Harry broke from royal tradition and kept the details of their son Archie's birth secret.

This included where he was born and who they selected to be his godparents.

Lacey writes: "William did not think too highly of Harry and Meghan’s ‘prima donna’ manoeuvres to conceal the birth of their son. He and Kate failed to visit the new arrival for a full eight days."

But according to Lacey, it was Meghan and Harry's decision not to reveal Archie's godparents that really caused upset.

All members of the royal family have godparents, as is traditional in the Christian religion, and they are referred to as 'sponsors'.

Lacey writes: "'Secret sponsor' has a dodgy sound to it. And it is an ingredient of Britain’s representative monarchy that the people should have the right to know who is giving moral guidance to their possible future king or queen."

He continues: "‘Friends’ of William suggested that the future king, only five places clear of Archie in the order of succession, could not comprehend how such a basic matter of constitutional principle had been misunderstood.

"How could any new Windsor royal be christened in a meaningful sense without the newcomer’s sponsors being known, if not present?

"What does such bizarre and paranoid behaviour indicate about the parents involved? One thing we may conclude is that Harry and Meghan had developed an exaggerated idea of their own importance."

Lacey is critical of many of Meghan and Harry's decisions in the past two years.

He also accuses them of being "self-pitying victims".

He writes: "The months since their marriage had demonstrated that the couple share a common character flaw — they both have a tendency to cascade downwards from their peaks of generous self-confidence into miserable moments of self-pitying victimhood."

Before marrying Meghan, Harry saw two of his serious relationships fail because the women he loved didn't want to take on the life of a princess.

Both Chelsy Davy and Cressida Bonas decided the royal spotlight wasn't for them after watching the Duke and Duchess of Cambridge's relationship develop.

Lacey claims it was Kate and William's wedding which was the final straw for Chelsey, telling a friend she could never make the sacrifices Kate had.

And it was the Cambridge family's tour of Australia that gave Cressida an insight in her potential future.

Watching Kate and Prince George stepping off the plane and facing the world's media reportedly left the actress "completely spooked" and she told Harry she didn't want to have that life with her children.

Lacey claims Her Majesty suggested the Sussexes take a year or two out in Johannesburg in 2019.

The monarch knew how desperate the couple were for an "ordinary" existence and felt something similar to the years she spent in Malta in her youth could do them good.

She had tasted "normal" life during her 'Malta Moments' between 1949 and 1951, alongside Prince Philip, who was serving as a naval officer on the Mediterranean island.

The future Queen would often fly out to stay with the Duke of Edinburgh, setting her up well for returning home to her duty, explained Mr Lacey.

Harry and Meghan are said to have been interested in the move to Africa, where their relationship had previously blossomed, or somewhere else in the Commonwealth.

However, it wasn't meant to be and Meghan and Harry quit before the plan became reality.

How to build an hourglass figure