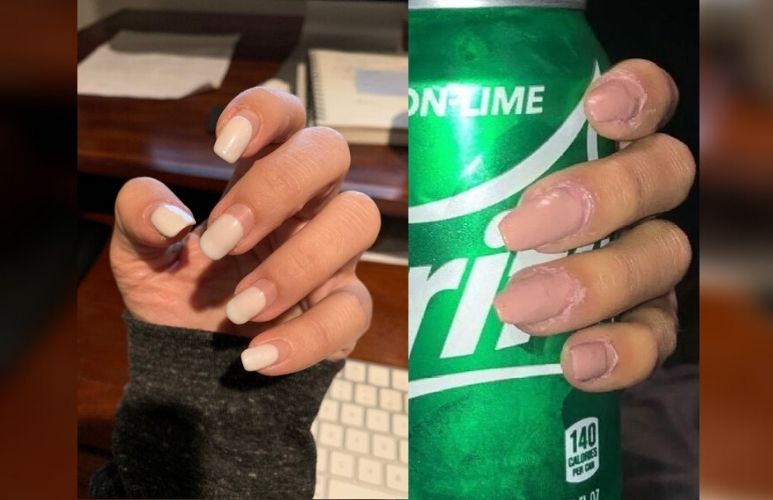 As the world battles coronavirus, all but essential businesses have been closed down in a bid to slow the spread of COVID-19.

Supermarkets, pharmacies and petrol stations are some of the key businesses that are able to stay open.

But other firms not classed as providing an essential service, including clubs, salons and restaurants have been told to close.

Nail bars are among the businesses who have had to shut their doors to help curb the spread of the pandemic.

This has left many women with nails in desperate need of some TLC.

And rather than waiting for the salons to re-open, some people have taken the matter into their own hands (excuse the pun) and tried their own manicures at home - with some very interesting results.

One woman, Jasmine Lopez shared a photo of her acrylic efforts online, and wrote: "Quarantine has me doing my own acrylic nails since all the salons are closed!"

Jasmine's nails still looked presentable, even though there was some polish on her cuticles - but she made sure she stayed safe with a nude polish.

However, not everyone was so lucky.

Another woman joked: "I spent like 5 hours doing my own acrylics because of quarantine...

"Make fun of them, please."

This set of acrylics looked pretty damn good considering she'd done them herself - and she even opted for a bright red colour.

In terms of the shape, it seems like she has gone for a combination of a stiletto and almond nail - pointy yet a rounder base, rather than a narrow one.

A third woman also shared the outcome of her DIY manicure session, although hers was fuelled by a few alcoholic beverages.

She wrote: "Quarantine day 4: got extremely drunk and did my own acrylics last night, woke up with the longest nails I’ve ever had."

Like Jasmine, she chose a light pink shade - the best colour to hide how much you really messed up - except hers were exceptionally long.

We all know that one of the hardest decisions, other than what colour you want, is how long you want your nails.

If they're too short, they make your fingers look even smaller than they are.

If they're too long you struggle to do just about any task, whether it's going to the toilet, tying up your hair or typing on your phone.

And, it seems woman number three accidentally chose the latter.

She later commented on her post, "but don’t look too hard because they aren’t done i am finishing them today".

And instead of trying to fix her nails herself, this lady went with the "inverse French".

As a result of a few weeks away from the salon, her nails have grown out.