Bride had 34 bridesmaids by her side at 'dream' beach wedding

A bride who had 34 bridesmaids by her side on her wedding day says 'every lady was handpicked'.

ALSO READ: Bride 'horrified' after finding out what happened to her ring before the wedding

It may seem like a large bridal party to most, but Casme Carter said she would have had 50 if she'd had more time to plan.

Twelve of her bridesmaids walked down the aisle with the 12 groomsmen while the remainder strutted 'catwalk style' at the Florida nuptials.

The group included six of her sisters, who were her maids of honour.

Casme said she was blown away by how well the women, whose ages ranged from 21 to 50, bonded.

She said her girls from different places are now all chatting to each other on social media, which makes her feel happy. 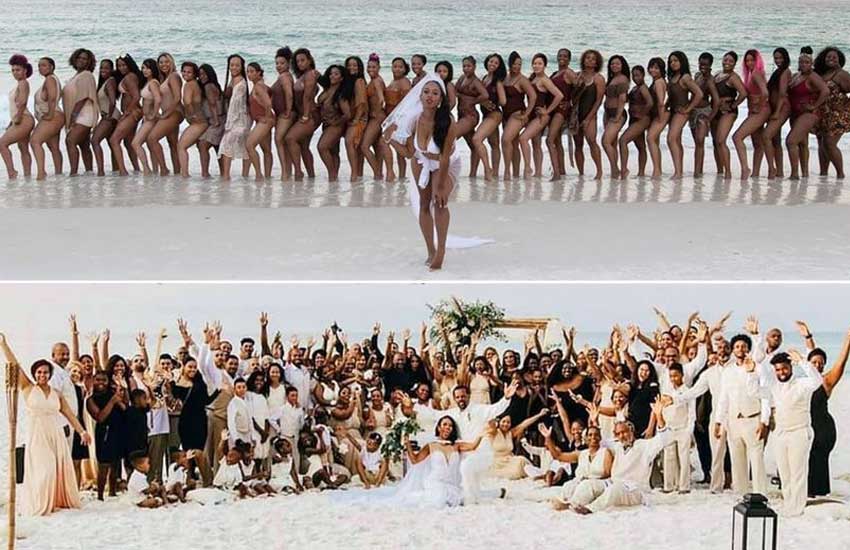 The women did a photoshoot on the beach in bikinis, before posing together on the big day in nude and cream coloured dresses.

"Every lady was handpicked," the New Orleans-based performer told Today.

"I travelled for 18 years as a singer and made incredible friends along the way. I felt so loved and blessed to have them by my side."

Casme added: "We had doctors and performers and lawyers, just a big assortment of different personalities and it was nothing but love."

The bride revealed her husband Gary initially thought she was joking when she told him her bridesmaid count.

He said although he had 12 groomsmen - he thought this would be the most you could possibly have by your side.

But his wife wanted everyone who was part of her life to be involved.

Some of the girls wore dresses they already had, while others went for a $25 design Casme found on Amazon as she wanted to keep it cheap.

The bride said she told her girls not to give her presents, as their presence was enough.

And she told ABC News the day - with around 100 guests - could not have gone smoother.

Casme, who has been imagining what her special day would look like for years, says it was a "dream come true".

Grandmother marries her adopted son, 24, despite their 41 year age gap