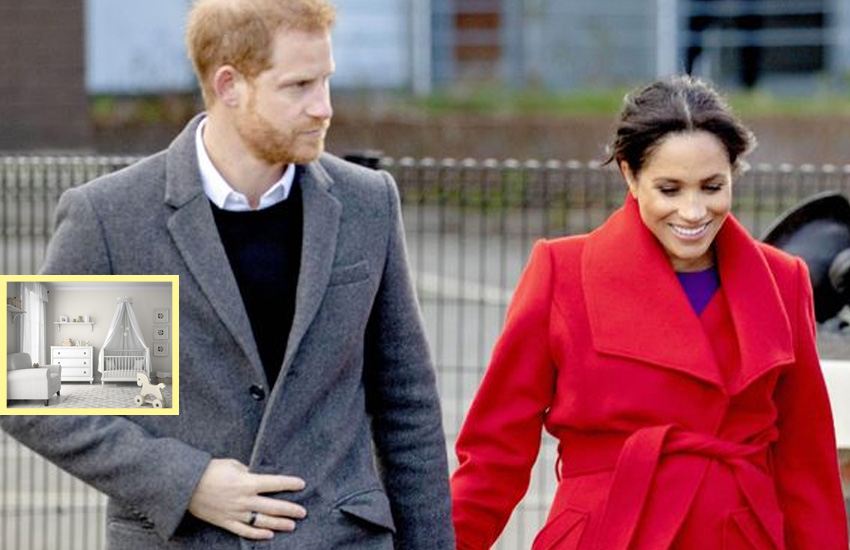 Meghan Markle is using vegan paint to decorate her 'gender-free' nursery, according to reports.

The Duchess of Sussex recently told a royal fan on a walkabout that she's six months pregnant and revealed to another that her due date is around the end of April.

The 37-year-old also revealed the royal couple don't know if they're having a boy or a girl and so have 'opted for neutral colours in the nursery'.

Meghan and Prince Harry are currently renovating the £3 million Frogmore Cottage on the grounds of Windsor Castle and are expected to move in as soon as possibe.

It was also revealed over the weekend the couple are 'giving up' their £2.5million bolthole in the Cotswolds as they prepare to welcome their first child just weeks before their first wedding anniversary.

It was announced late last year that Meghan and Harry would be leaving Kensington Palace and moving to Windsor.

Now Meghan is focusing on making sure everything is perfect in their new home and is said to be using a toxic-free paint to decorate her baby's nursery.

The vegan paint is infused with eucalyptus and rosemary oils and Meghan has hired Vicky Charles, a top design director, to decorate the nursery.

Vicky is behind the design of the trendy Soho Farmhouse where Meghan spent three days on her hen do.

Some paints use milk products or beeswax as a binder and can be tested on animals before being deemed safe for use.

As a result, Meghan has opted to use the Organic and Natural Paint Co, and is going for neutral whites and greys, reports The Sun.

An insider said: "Meghan has been looking long and hard at paints for the Sussex nursery.

"Rather than opt for fashionable Farrow and Ball paint in favoured shades such as Wevet, Peignoir and Pavilion Grey and Salmon, the Sussexes are much in favour of The Organic & Natural Paint Co’s Auro range for the nursery."

The former Suits actress is also making sure Frogmore Cottage is as safe as can be with childproof windows.

She has also opted for a £50,000 eco boiler which means they will have access to hot water at all times.