14 things that women who have ‘sponsors’ do 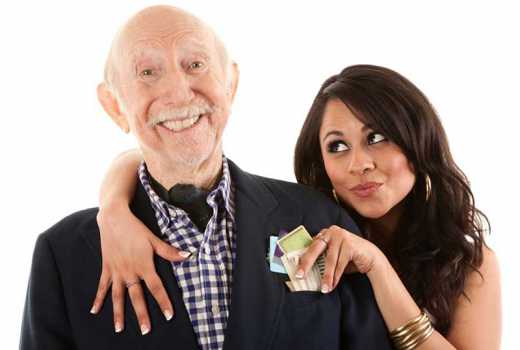 A while back, in the twilight hours of a weekday, I saw a man slightly younger than Kenya’s independence trying to plant a peck on some lass who looked 20-something. The woman wheeled her head the other way, making the man miss with the reprimand: “Sometimes you embarrass me, even around my friends.” She was clearly displeased.

It was along the busy Kencom area, and the woman was justifiably apprehensive. Maybe one of her friends might see an old man publicly displaying his lust and might draw wrong conclusions.

While dating senior citizens is bound to arch some eye brows Kenyan society has lately seen older men recklessly showing their affection in public in the company of younger girls, who seem to have kissed moral scruples goodbye. They are now comfortable sitting on the laps of men with sagging foreheads, calling them ‘Sweets.’

I would leave these women alone, because we are all trying to put food on the table, but they have become annoying braggarts who put men and women their age down. They flaunt their smartphones, cars and vacation pictures, just to make their peers envious. They long wrote off men their age.

A relationship between a grandpa and a woman the age of his daughter is a mutually exploitative arrangement. The man wants sex. The young woman wants the money. Period. We have since upgraded our vocabulary. Sugar daddies and men who generally dish out money in exchange for sex (including Nigerian men and drug dealers) are now called sponsors.

This is to help men identify a woman who is living a sponsored life:

ALSO READ: Signs you are a procrastinator and how to stop

If she previously lived in Zimmerman, but suddenly moves to Ngong  Road and starts saying things like,  “Makangas harass commuters,” (previously known as passengers) and she drops a line like, ‘Zimmer is so crowded.’

She suddenly opens a well-stocked shop, mostly selling clothes and handbags from ‘Dubai’ and you cannot trace source of the capital.

She wears expensive weaves, clothes and shoes. Women hate spending extravagantly on themselves if they are the ones footing the bill.

@PatOski on Twitter reckons those ladies who enjoy Rhumba are sponsored. I agree. Any woman under 30 who enjoys Rhumba has dated an older man.

You see her at a bus stop in Buruburu with an iPhone at 10.30 am. Or she changes her smartphones with the regularity of a spoilt brat, yet she is just a student on HELB.

She posts pictures of exotic destinations without male company.

She normally disappears from her friends for days on end. Her ‘vacation’ destinations are mostly Zanzibar, Malindi and she thinks Dubai is the best place on earth.

She drives a big car, yet she clearly can’t afford it, given she is just an insurance saleslady.

She has since stopped eating on the lower end of Moi Avenue which she finds ‘boring.’

She’s no longer a ratchet who drinks cheap booze and throws up half-chewed githeri. She has since taken to creamy and pricey liquor, and only drinks in ‘mature clubs.’

Her browsing history is full of erotica and searches like, ‘How to give an old man multiple orgasms.’

She has disposable income that cannot be traced.

She suddenly possesses car knowledge and acts like she can replace Jeremy Clarkson at Top Gear.

She is a gym fanatic. I still hold it that very few Kenyans go to the gym for health reasons. Being sponsored is a full-time job and she must retain that perfect shape, lest she be upstaged by a younger, fancier girl.

If you see one with such attributes just know you can’t afford her epicurean tastes, especially if you live East of Uhuru Highway in a flat with a corner duka at the far end next to mama mboga.

Signs you are a procrastinator and how to stop