No romance without finance??


By CHRISTINE MUNGAI | 4 years ago 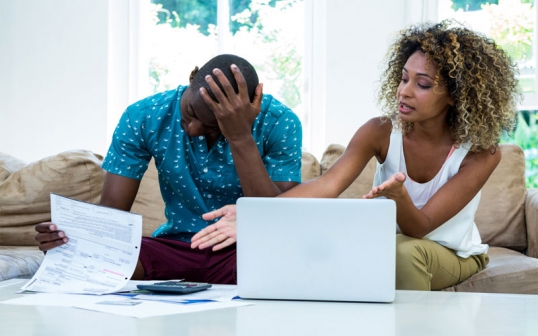 "No romance without finance," it is said – and when R&B singer Gwen Guthrie recorded this mega hit in 1986, it generated a storm of controversy, accused of promoting materialism and 'gold diggers'.

But Guthrie herself said that the song – whose title is actually "Ain't Nothin' Going On But The Rent' – was not intended to suggest that a man only requires money to be dateable, or to make a relationship work. Instead, it was intended to motivate her partner into being responsible for maintaining financial stability and equality.

Still, the song looms large in the cultural consciousness, but flagship report from Financial Sector Deepening (FSD-Kenya) reveals just how much relationships matter for financial stability, especially for women.

In the first place, women are more likely to own property jointly with their husbands, while men, more often own property alone, data from the 2014 Kenya Demographic and Health Survey (DHS) shows.

The percentage of women who own a house or land increases with age, but (perhaps counter-intuitively) the more educated a woman is, the less likely she is to own land or a house in Kenya. It is possibly because ownership of both land and a house for women is much more common in the rural areas than among their urban counterparts.

The FSD-Kenya report reveals the implications of this situation for women. Being in an intimate partnership with a man who doesn't step up to his responsibilities is perhaps the primary factor that makes women's lives financially precarious.

But even worse, there are very few social – let alone legal – or meaningful ways to make a man be responsible if he doesn't want to be. If a man willfully neglects his financial responsibilities in the home, there is little anyone can do to pressure him to change his ways.

The FSD-Kenya researchers observed a "laissez-faire attitude toward men's negligence or transgressions, or at least omission of direct criticism, from kin. Women, on the other hand, face direct judgment and overt intervention from relatives with more authority."

It means that women are often the 'last line of defence' for family survival, filling the gaps and picking up the slack for men who fail to come through.

Take the example of Peter and Rebecca, quoted in the report. Rebecca supported her family by running a small kiosk store. Rebecca described how her husband Peter "disappointed" her by staying at home and spending money on alcohol and cigarettes even when they were cash strapped.

As a field researcher noted in the qualitative journals, "Peter says that, even though you might see him sleeping in the house, it is not as if he's not working. He's actually thinking of plans for how to make money."

Peter sometimes managed to find odd jobs, but did not pursue them very aggressively. When his son was sent home from school for unpaid fees, Peter asked for more time from the school rather than feel motivated enough to go out and look for work.

Rebecca would have liked to count on her husband to play his role in providing income for school fees, but "motivating him to take action was not worth the trouble." She preferred to be busy with the kiosk, but noticed that the only time Peter took initiative to make money was when she stopped working. Rebecca even withheld food from Peter to try to motivate him.

The researchers, who meticulously documented the financial lives of 286 low income Kenyan households, found that a very important factor in the financial stability for families was a spouse's (in the study, mostly the male spouse) decision to take on a second spouse and children without the consent of his existing partner.

"Our female respondents complained not only of the betrayal of trust (which in many cases was expected), but also of the siphoning of resources to care for mistresses, second wives, and their children.

Even worse is when a man squanders the opportunities before him – and then turns around to his wife to bail him out, as was the case with Nancy and Stephen.

Nancy was a successful chang'aa brewer, and to help 'uplift' her husband Stephen, she took a loan with her microfinance institution to start a business for him. It was a small kiosk shop, and Stephen—with access to goods and cash—courted many women in the area, giving them free goods and lavishing business revenue on them. Nancy says he would win them over with free sanitary pads. The shop eventually collapsed, and Stephen never made a single loan payment. Nancy is still paying it off on a negotiated plan with her microfinance institution, with all of the payments coming from her own brewing business.

"She often considered leaving, but where would she go? It took 10 years to build her client base in the community. How would she survive if she left? Women often have little option but to stick it out, no matter how bad it gets," the report states.

The hard reality for women is that there are very few resources – savings, land, physical assets, a home, even family relationships and friendships – that they can carry with them if they decide to leave.

Starting over, for most women, means starting over from literally zero, a risk that many women, even those in unhappy or destructive marriages, are unable or unwilling to take.

Many relationships are happier and more collaborative, but even so there is often an element of secrecy and uncertainty, with neither partner willing to fully disclose sources of income or their plans.

Mark and Fiona are one such case, quoted in the study. They married young, but Mark was unprepared for the responsibility of caring for a wife and child, and they struggled to make ends meet. Fiona was forced to pick up casual work washing clothes, which her family found shameful.

Mark eventually shaped up after their third child, getting work as a newspaper vendor, saving one shilling from every paper sold, and building connections to become a distributor.

Meanwhile, Fiona was also quietly saving her money, and when Mark announced that he was building a home for them upcountry, Fiona offered up her savings to help move construction along. Two years later, they also pooled funds to at last pay Fiona's parents for her dowry.

While both the dowry and the home were Mark's responsibilities, "Fiona sought secretly to fill the gaps, both of these achievements being deeply important to her, but also out of her reach on her own."

For both, privacy was key. "Mark didn't want to inflate his wife's expectations. Fiona wanted Mark to first fulfil his responsibilities and see where he was headed before expending her own savings, which after all, might be needed to fill other gaps—like buying food if business was down or paying school fees when a child was sent home."

These examples illustrate just how precarious the financial lives of most Kenyans are, and how deeply they are intertwined with intimate domestic relationships.

The FSD-Kenya researchers end with a radical suggestion: that perhaps the most meaningful service a financial institution can give women – apart from the pink ATM cards and fluffy advertising – is supporting the many moments in a woman's life when she will economically be starting over.

Disruptions may be from irresponsibility, separation, divorce or death of a spouse, but also illness, where caretaking of a family member falls on the woman.

It could be a risky move for financial institutions, "but being able to start from zero multiple times throughout one's life is key to supporting women's resil