Curse of democracy: How elections hurt the economy every five years

By Dominic Omondi | 6mos ago

In Kenya, elections and investments are like oil and water. They don’t mix.

Heightened political activities every election year have only served to increase economic uncertainty, with some investors, particularly foreign ones, fearing post-election violence as happened in 2008 when hundreds of lives were lost and property worth billions of shillings was destroyed when Kenyans turned against each other over dispute presidential election results.

The trend is not any different this time round as the country prepares for another General Election on August 9.

Azimio la Umoja’s Raila Odinga and Kenya Kwanza’s William Ruto are expected to face off in a fierce contest to succeed President Uhuru Kenyatta. Predictably, this has built up a cloud of uncertainty which has only been aggravated by the inevitability of a regime change and the economic aftershocks of the Coronavirus pandemic.

Investors are holding back with their money, running down the clock as they wait to see who will take over as president and how they will constitute their Cabinet.  “It is going to set in a very uncertain period,” says Gerishon Ikiara, an economist. “That will affect us for almost six months after the elections as people see what kind of policies are coming up, what level of stability, what are some of the programmes, for example which sectors will be given priority”.

Already, there are signs that investors have started taking a wait-and-see approach. For instance, the value of buildings approved for construction by the County Government of Nairobi last year declined by 33 per cent to Sh102.9 billion, according to data from the Kenya National Bureau of Statistics (KNBS).

Johnson Denge, a real estate expert, says the housing sector has always declined in election years. However, he is afraid the trend might be more pronounced this year.

There is uncertainty as to whether the next administration will, for example, embrace the Big Four Agenda which has affordable housing as one of its pillars.

“Investors are even reluctant to continue pumping money into affordable housing because you don’t know if the Big Four Agenda will be adopted by the next administration,” says Denge. The International Monetary Fund (IMF) has warned that there is a 30 to 50 per cent chance of the country descending into political instability this year.

According to the IMF, there is a high risk of election-related violence within the next 12 months, posing a threat of derailing the country’s growth prospects.

“Political violence could emerge around this year’s (2022) presidential election as seen in previous polls,” said the IMF.

Investors have always been spooked by political uncertainty that has become part of Kenya’s election cycle. Consequently, most of them adopt a wait-and-see approach before committing their money into the Kenyan economy. The trend is being replicated this year and is likely to spill over into 2023.

As a result, this has reduced private investment, which has in turn depressed the Gross Domestic Product (GDP) - the monetary value of all the goods and services produced within the country. A slow growth in GDP means a slower rate of job creation, which translates into high cost of living. Left unchecked, this can degenerate into social crisis.

The economy has been through a rough patch in the last four years - starting with 2019 which the governor of Central Bank of Kenya, Dr Patrick Njoroge, described in a tweet as a “brutal” year.

2020 turned out even worse, with the size of the economy shrinking for the first time in two decades.

Now, just when the economy was coming out of the woods when the Government started rolling back most of the stringent containment measures aimed at curbing the spread of the pandemic, election jitters - and drought - are emerging as new threats to economic growth.

Indeed, investors are now more worried with the upcoming election than they were with Coronavirus at the height of pandemic in the first half of 2020. This is according to the World Uncertainty Index (WUI), a toll developed by IMF and which tracks the uncertainty of business environments in 143 countries in a given quarter.

Aspirants have been coalescing around new coalitions whose strength will be tested in coming months, especially after nominations, which could trigger even further re-alignments in the political arena. As a result of this uncertainty, forecasters have revised downwards their growth projections for this year amid fears that politics will undo the gains made when the economy started re-opening with easing of Covid restrictions.

Indeed, the captains of the industry are now more worried with the uncertainty surrounding the elections more than they were with the pandemic.

An aggressive vaccination campaign has reduced cases of Coronavirus, allowing the Government to roll back the stringent measures aimed at curbing the spread of the disease. Before Covid-19, which shrunk GDP for the first time in two decades, polls and drought have always been the two biggest threats to the economy since the onset of multiparty politics in 1992.

And because investors delay decisions during election periods, most of the effects of their fence-sitting are always felt a year or two after elections. For example, the impact of the post-election violence of 2007 spilled over to 2008 and 2009 before the economy rebounded in 2010.

Two years later, the economy had not yet recovered with GDP growing by 2.7 per cent before rebounding in 2010 to post a record growth of 8.1 per cent. In 2017, a combination of drought, elections and reduced credit to the private sector due to a law that capped interest rates charged by banks negatively affected economic growth. That year, the economy grew at a slower rate of 3.8 per cent.

In fact, a protracted electioneering period that was inflamed by the decision of the Supreme Court, which overturned the presidential election results and ordered a repeat election, heightened the uncertainty in the country in the fourth quarter of 2017.

Not surprisingly, Kenya was ranked as having the second-worst business environment globally, behind South Africa, in the period between July and October 2017, according to an index that tracks uncertainty in 143 countries.

After the elections in the fourth quarter, the index shows, the uncertainty declined slightly, but it was not until after the so-called handshake between President Uhuru Kenyatta and Opposition leader Raila Odinga in the third quarter of last year that investors felt at ease to put their money in the country once again.

Now, the Economist Intelligence Report shows that uncertainty in Kenya has jumped to levels higher than in the first six months of 2020 when investors were worried about the adverse effects of the pandemic. Similar economic slowdown was recorded around the 1992 and 1997 elections, which were characterised by violence in some parts of the Rift Valley. And in 1992, drought and sanctions from the West added to the country’s woes.

The other time when uncertainty was high was in 2002 when the country was electing a new President after 24 years of President Daniel arap Moi’s tenure. In the fourth quarter of 2002, the business climate in Kenya was the most uncertain in the world, confirming findings that elections in Kenya have tended to depress growth as wary investors opt to keep away. With another transition in the offing, the trend is likely to persist. 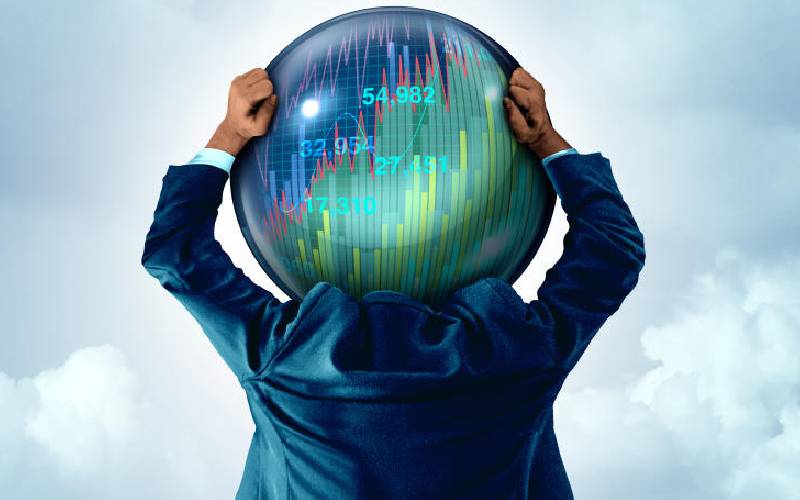 Premium Election crystal ball that is splitting investors
Survey says firms are concerned that business performance will be affected by increased political activity.
Business
By Patrick Alushula
6 months ago
.