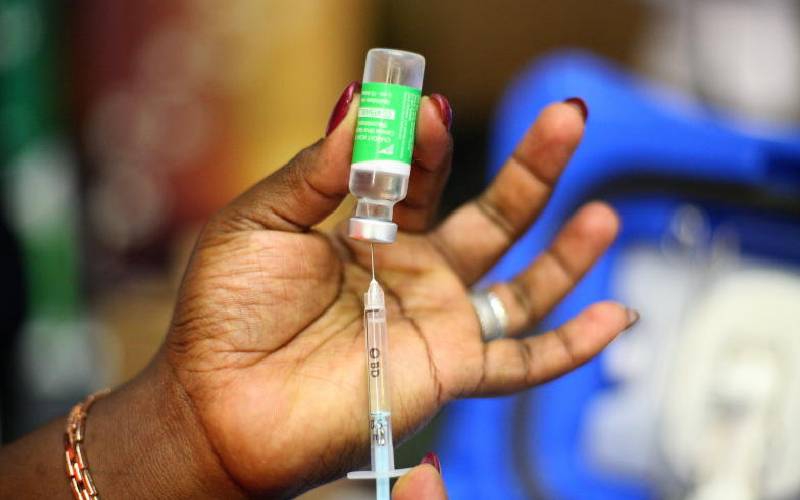 Kenya escaped the fourth wave of Covid-19 infections that had been predicted to happen mid this month because of the enhanced mitigation measures the government put in place.

The ministry of Health cited the stiffer lockdown imposed on 13 counties in Nyanza and western regions as on of the measures that kept the country from ravages of the fourth wave that was expected to be more lethal.

"It is good to make predictions in such circumstances as we did. However, that does not mean we sit down and wait. We predicted the fourth wave of infections, at the same time took measures that later kept the fourth wave at bay," said Dr Amoth.

It was Kemri Wellcome Trust that had predicted, in its report, that the more lethal fourth wave of coronavirus would occur mid-July.

The report indicated that there would be 4,300 hospitalizations and about 580 deaths by the end of this year.

Prof Matilu Mwau, Kenya Medical Research Institute (KEMRI) deputy director, said the surge in infections that the country expected in mid this month were registered on July 1 instead.

"The country is already past the fourth wave. A surge in cases was reported in May. A larger peak that had been expected mid this month was instead recorded around July 1. Infections have since dropped due to lockdowns and other measures that have been put in place,” said Prof Mwau, who is also a virologist.

Reports by the Health ministry show there was a spike in infections in June and the beginning of July. Most of the cases were reported in Nyanza and Western regions. This saw the government declare 13 counties in the two regions disease infected. The affected counties - Busia, Vihiga, Kisii, Nyamira, Kakamega, Bungoma, Kericho, Bomet, Trans Nzoia, Kisumu, Siaya, Homa-Bay and Migori - had 60 per cent of the country's total number of infections. The positivity rate in these counties was also high, at 21 per cent compared to 12 per cent nationally.

A spike in infections in the two regions saw President Uhuru Kenyatta impose restrictions on gatherings and curfew hours adjusted to between 7pm and 4am from 10pm and 4am. All public and religious gatherings were banned as well as non-food markets. All these measures, officials have said, helped reduce transmissions.

“We attribute failure of the virus to peak in mid-July to various interventions such as vaccination and other measures that have reduced infections and deaths,” said Prof Mwau.

Dr Amoth said the country can escape future waves of the disease if Kenyans observe the health protocols that have been put in place.

"Adhering to such measures can break the potential of a wave to develop," Amoth said. "We might have several waves in future because of mutation of the virus and new variants. This is part of evolution in biology of viruses.”

In the past six months, Kenya has reported a total of 1,964 deaths from Covid-19. There have been 87,703 new infections within the same period, according to records at the Health ministry.

April had the highest number of deaths, at 571. June registered 462 deaths while 448 more people died in May. Other deaths were reported in January (93) and February (93). March had 297 deaths reported.

The highest number of infections was in March, with 28,085 cases reported. Another 25,260 cases were registered in May while June had 13, 426 infections.

Between March and December last year, the country recorded 1, 674 deaths. Some 96,458 infections were reported over the same period.

Mwau said some vaccines, including Oxford/AstraZeneca, have been found to have effects on Covid-19 variants, including the Delta variant which is dominant in the country.

Other variants include Alpha, which originated in India, and Beta from South Africa.

“I was worried the vaccines would not be effective. They are working even though the variants have kept mutating,” said Mwau.

He added: “If we vaccinate all people, we could arrest the natural cause of the coronavirus, irrespective of variants that might come along the way."

Kenya launched her vaccination programme on March 5 after receiving 1,120,000 doses of Oxford/AstraZeneca, through the Covcid-19 Vaccines Global Access (Covax) facility.

Dr Amoth said the ministry is determined to vaccinate at least 10 million people by December and 26 million by 2022.

"The more people are vaccinated and the more stringent the measures we are put in place are, the more the chances of keeping future waves of the disease at bay," Amoth told The Standard.

But even with increased mitigation measures, Kenya is still struggling to carry out tests due a shortage of sampling kits, according to the ministry of Health.

Calls to prioritise people living with HIV during Covid-19 vaccination

Kenya is among countries that have been asked to include people living with HIV/AIDs in the list of groups prioritised for the Covid-19 vaccine.

By ANTONY GITONGA | 8h ago