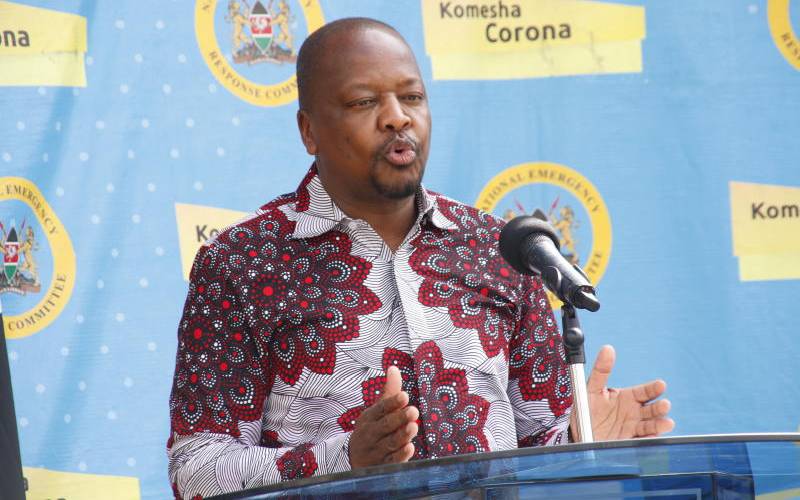 Some 727 people have today tested positive for coronavirus in Kenya.

Health protocols in place at the airports will ensure the safety of travellers, the Health ministry has said.

Thermoscanners, protective screens and sanitisation points at the airports have been set up to protect passengers and visitors.

"We are not opening the airspace because the disease is under control ... we have to adopt to this new normal."

All airport staff have been trained on quarantine and safety procedures to keep all safe.

But Kagwe admitted that some of the changes may lead to inconveniences.

He appealed to health officials to undertake their responsibility, while keeping in mind that "these are not normal times".

The reality of how catastrophic Covid-19 could hit Kenyans came to light on Friday as the country recorded yet another new record of 16 fatalities in a day.

Ten of the 16 deaths were reportedly from a single hospital.

Since President Uhuru Kenyatta reopened the economy on July 6, a total of 181 people have died from the virus.

This is more than what the country had reported since March 13 when the first case was confirmed.

At the time the president lifted lockdown orders, the number of deaths stood at 164.

Director General of Health Patrick Amoth said the country’s case fatality rate is still 1.6 per cent compared to the global average of 4.5 per cent.

The increase in the number of deaths comes with a disturbing pattern: More young people are dying, according to Health Cabinet Secretary Mutahi Kagwe.

Generally, old age and underlying health conditions like diabetes and hypertension synonymous with the aging have been contributing factors. Hypertension and diabetes combined account for 32 per cent of Covid-19 related deaths.

According to the Health ministry, 54 per cent of the Covid-19-related deaths are linked to comorbidities (a combination of conditions).

However, for the younger population, while there might be some with underlying conditions, Kagwe noted behaviour is the main reason for the spread.

Meanwhile, the global health agency has issued public health considerations meant to guide countries as the battle against Covid-19 rages.

Dr Koki Mutua, Public Health director, on Friday said passengers will be provided with a link from the airlines or booking agents to access a surveillance form.

A health desk set in place will have the passengers fill more details on their health. Passengers will be required to share their temperature readings for 14 days through the app.

Those who do not share the details will be traced and questioned, but Dr Mutua stated that the success of the procedure relies on passengers' compliance. The World Health Organisation said some countries are already using digital tools to aid contact tracing efforts.    These include mobile phones and apps for location tracking or proximity tracing and some for symptom reporting during the 14-day post-arrival period.   While the WHO admitted that technology cannot replace public health contact tracing, it said it may be considered as an adjunct under specific conditions.   Mobile phones and apps can be effective in identifying and informing travellers who may have been in contact with a person confirmed to have Covid-19 or a positive test for Covid-19 only if a large proportion of the general population uses such an app.