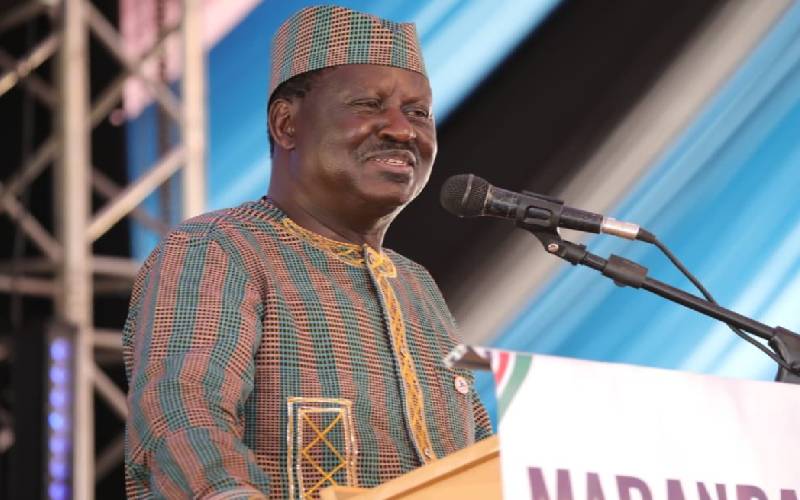 ODM leader Raila Odinga has called on Kenyans to remain calm and cooperate with the government to help curb the spread of coronavirus following the confirmation of the first case in the country.

Raila (pictured) told Kenyans to do the basic things such as avoiding handshake and wash hands that to help curb the spread of the pandemic in the country.

In a statement, Raila said the government had accurate and science-based advice on how the country should proceed, hence, urging Kenyans not to panic.

He said the government has suspended all religious crusades, gatherings, inter-school events and prison visits to ensure that the situation is brought under control.

"A raft of measures have been announced by the government, including the suspension of inter-school events, prison visits, church crusades and all other public gatherings.

He said the confirmation of the first coronavirus case will disrupt a lot of activities in the country but urged Kenyans to bear with the government.

"These measures will definitely cause disruptions across our country. But we must adhere to them as the best scientific advice that we can rely on to overcome the danger," he said.

Raila hailed the government’s elaborate approach of dealing with the disease and protecting the health of Kenyans through heavy mobilisation of resources to disease surveillance.

"We are pleased with the whole-of-government approach to handling the threat and protecting the health of Kenyans. We further appreciate that the government is leveraging all of our resources to respond to the threat," he said.

With all public gatheirings banned, the Nakuru BBI consultative forum could be one of the affected events.

The rally was slated for March 21 at Nakuru’s Afraha Stadium.

Announcing the development, Health Cabinet Secretary Mutahi Kagwe said the patient, a Kenyan woman who had flown in from Ohio, USA, via London to Nairobi, tested positive Thursday.

Kagwe said she had been isolated at the Kenyatta National Hospital (KNH), Nairobi, and was in stable condition.

"The government has taken preventative measures and is monitoring the patient... who is stable," said Mr Kagwe.

He said the government was tracing all the people who had come into contact with the patient to contain the spread.

He directed that those coughing and have fever and difficulty in breathing should stay at home.

“What we have is a positive patient no more than that so there is no cause for alarm.”

By MIRERI JUNIOR | 4d ago

Covid-19: Kenya records 156 cases, five deaths
To personalise content, tailor ads and provide best user experience, we use cookies. By using our site, you agree to use our cookies.