Patients at risk of unsafe blood as cash veins dry up 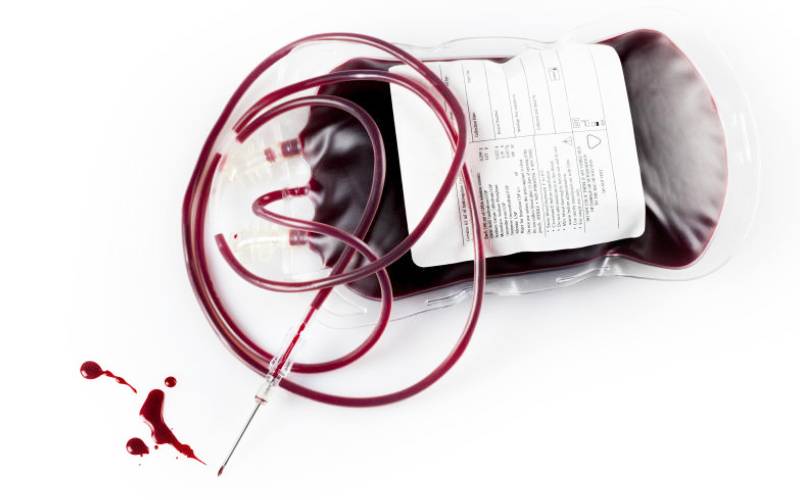 The state of blood transfusion services in Kenya has hit the red line.

The once regular heart beat that supplied blood to all Kenyans in need is nearly a flat line, as the cash veins run dry at the Kenya National Blood Transfusion Services (KNBTS) unit of the Ministry of Health.

So dire is the situation that the unit has run out of reagents to test donated blood for such deadly infections as HIV, hepatitis B and C and syphilis.

What may appear as a current crisis comes even after a 10-year advance warning from the President’s Emergency Plan For AIDS Relief (PEPFAR), a US Government initiative to address the HIV/Aids.

The US had been providing funding to blood safety in Kenya as an area that risked transmitting HIV. But in 2011, PEPFAR issued a funding alert, warning that its coffers would run dry by 2019.

“PEPFAR funding was in three phases. The first was the emergency phase in 2005-2009. The second, between 2010-2014 was the sustainability phase, and the last was the transition phase between 2015-2018,” explained Daniel Kimani, a public health specialist at the US Centres for Disease Control and Prevention (CDC)

After that, the donor taps started running dry, and the writing was on the wall for any relevant government official to see that Kenya’s blood transfusion services was headed south.

But the warning signs went unheeded. “Funding started declining in 2011, something that the Government of Kenya was fully aware of,” said Dr Kimani.

Worse still, the KNBTS and its satellites started facing challenges in screening donated blood due to lack of requisite reagents.

“Towards the end of this January, KNBTS had to borrow these reagents from nearby private hospitals in Nairobi to screen 500 units of blood. This was exhausted in three hours,” a source privy to the challenges at Kenya’s blood bank explained.

The average units of blood donated and received by KNBTS for screening on any day are 400, a number that slow equipment cannot manage efficiently to meet demand.

“PEPFAR would give funding equivalent to 80,000 tests per year for Nairobi’s equipment, which also serves as a back-up for other sites,” said a source at KNBTS, who wanted to remain anonymous out of fear of being victimised.

“Though it was given quarterly, it was sufficient for Nairobi, which also supports nine other regions, including Garissa, Thika, Machakos, Kisii, Nyeri and Meru,” the source said.

By the time PEPFAR funding ended, KNBTS had not procured the blood screening reagents. It is yet to do so from the Kenya Medical Supplies Agency.

Instead, the division has been relying on low efficiency ELISA blood screening equipment, of which only three of the six that are in the blood unit’s satellites are functional.

This means that blood is collected from donors but very few units are dispatched for use by recipients.

Worse still, the only available screening reagents are fast running out.

“I don’t know what will happen next if we run out of ELISA reagents. No testing will take place unless well-wishers chip in to help,” said our source.

New equipment from China was purchased and installed at the Nakuru Blood Transfusion Centre, but is yet to be validated and equipped with the kits necessary for screening blood. Besides, no staff has been trained on how to use the new equipment.

“This equipment is not known for blood banking and is not used anywhere else apart from China,” a doctor conversant with blood services said, adding: “We do not know its safety profile and even if it starts operations, it will only be in Nakuru”.

The problem is not only in screening blood, but also in the availability of basic commodities such as gloves and stationery. “We borrow gloves from everyone that we can, especially when hospital personnel come to collect the little that we have. These are items that are necessary for the safety of those handling the blood samples,” said the KNBTS official.

Lack of blood bags has also been a major hindrance to blood collection with some KNBTS satellite centres seeking help from private hospitals in their locality at the height of the crisis. Nairobi has been worst hit.

“At the end of January, we received donated bags since there had been no consignments from the Ministry of Health,” said the source.

The crisis has been exacerbated by staff shortages after a number of them were laid off in 2015 when the reality of the funding cuts hit home. “The fewer the technical and auxiliary teams available for outreaches and blood drives, the lesser the blood collections became,” said the source.

The result has been that KNBTS has not met the target of at least 500,000 blood units per year, which would be sufficient to cover Kenya’s blood needs. “Previously regional centres were meeting 70 per cent of their targets, but now they manage an average 20 per cent. In 2019, KNBTS collected only164,000 units, less than half the target,” the source said.