The Standard’s “Hidden Killers” series is supported by The Pulitzer Centre.

The country experienced an increase in measles cases in some counties after immunisation programmes suffered due to the medical emergency occasioned by Covid-19, leaving unvaccinated children exposed.

Measles, the world’s most contagious virus, is often subdued by vaccination.

In West Pokot County, for instance, cases of measles shot up from seven in 2019 to 17 in 2020, a 200 per cent increase, according to the national disease monitoring data in Kenyan hospitals.

Out of these cases, 17 were from West Pokot, which joined Tana River, Wajir, Garissa and Kilifi counties with reported measles cases in the last quarter of 2020. Two children died.

The highest number of measles outbreaks was 12 at the Dadaab Refugee Camp in Garissa, which has fragile immunisation programmes.

Lockdown and fear of contracting the coronavirus kept mothers and caregivers away from hospitals where vaccines are given. In fact, women who gave birth at home avoided going to hospitals.

Sophia Lelemur from West Pokot gave birth in April 2020, but opted to visit a herbalist “to get herbs to boost my immunity”, she told The Standard.

West Pokot Director of Health Samuel Lopar notes that there was a shortage of vaccines from the national supply chain due to poor roads in the region.

Poor electricity connectivity in Baringo, Pokot and adjacent counties also affects the potency of vaccines, which have to be stored at a temperature range between two and eight degrees Celsius. An estimated Sh13 million was spent on fridges for storing vaccines and dispatched to North Pokot, South Pokot and Central Pokot.

“These system challenges coupled with the pandemic only made matters worse as it paralysed community sensitisation,” says Lopar. 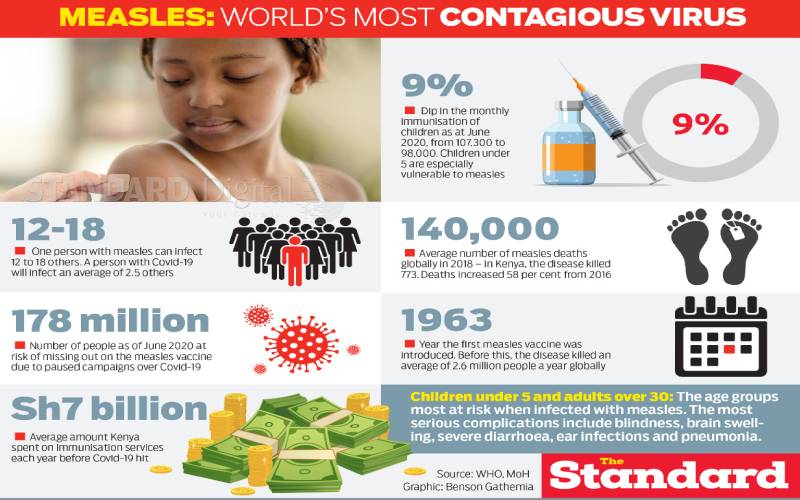 Collins Tabu, the head of Kenya’s National Vaccines and Immunisation Programme, explains that scientists assign any infectious diseases a number to inform them of how fast they can spread.

This is a ‘reproduction number,’ which is the number of people, on average, who would be infected by a person with the virus in a ‘naïve’ population without immunity. Ebola’s is about one and three while Covid-19’s ranges between two and three.

Tabu explains that “measles’ reproductive number ranges between 12 and 18, the most contagious in the world known to mankind”.

According to the World Health Organisation (WHO), measles claimed 140,000 lives in 2018, a 58 per cent increase from 2016. Death rates in countries like Kenya are about five per cent. In the West, measles kills children due to the opposition that people have to immunisation. In countries like Kenya, it is due to missing vaccines.

The Ministry of Health’s schedule gives two doses of measles vaccines for children aged between nine and 12 months and the second dose between 18 and 24 months.

According to Health Cabinet Secretary Mutahi Kagwe, the target for the Measles-Rubella Vaccine is 90 per cent. Counties with measles outbreaks have performed dismally against this national target, as low as 58 per cent.

Sister Emily Wasike says Baringo Mission Hospital in Baringo County, for instance, often vaccinates 500 children below five years every month, but during the pandemic, it only managed a paltry 250 monthly as mothers kept off hospitals and medics could not reach them.

“We will feel the consequences of missing these vaccines,” she says.

Delaying vaccinations due to Covid-19 in Kenya will hurt children more than Covid-19 itself, according to the London School of Hygiene and Tropical Medicine whose study on effects was published in the 2020 issue of Lancet journal.

Paul Odila of international non-profit health organisation Jhpiego, and which runs vaccination programmes, stresses that measles vaccines are non-negotiable due to the speed of infections through respiratory droplets of sneezes, coughs, or just breathing. Studies indicate that respiratory droplets can hang in the air for hours.

“Children are particularly vulnerable to measles because they are carefree in the playground, touch one another and know little about keeping distance,” explains Odila, adding that the consequences of measles include diarrhoea, inflammation of the brain and pneumonia, with the latter killing its victims besides permanent disability, hearing loss, and brain damage.