Of couples who get ‘stuck’ during the act: Truth or myth?


By DAVID HUBA ODONGO | 3 years ago 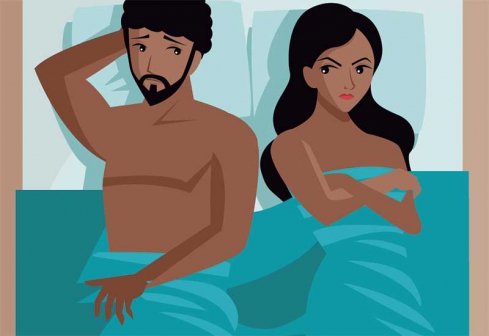 The 7pm news bulletin presented by a cute anchor was about a couple who got stuck while romping in a lodge. A jealous hubby apparently decided to consult a witch-doctor, whose juju ‘locked’ the cheating lovers. The lodge was located in a seedy part of town. A crowd of curious onlookers had gathered, demanding to see the couple, as the police tried to keep them at bay.

But patrons cheered gleefully as they listened to the news in bars that day in 2013, when the 25-year-old Kisumu man was busted with a married woman in the satellite town of Kondele.

The incident drew a large crowd and a representative from the husband’s side told news reporters that the man was seeking an undisclosed amount as damages before he could ‘release’ the two. Police later came in and dispersed the crowd. But is ‘getting stuck’ a myth or reality? Still, many people get excited and talk for months about such couples, who are invariably from either Ukambani or Mwambao. Even if it happens in Kisumu, the jealous wife, or randy man, is usually from those regions.

Martin Mulwa, a lawyer who hails from Ukambani, says there are two types of kamutii (juju) for married couples.  “There is one that makes the man’s member go lame every time he is with a woman who isn’t his wife. The woman can apply the potion on the man’s member, others put it in food or rub it in the man’s boxers,” he says. Mulwa adds that, “The second type is the one which a woman or man applies on the boxers or panties of the spouse and when either engage in extra marital sex, they get stuck. The antidote has to come from a real medicine man because there are a lot of fake specialists.”

According to University of Nairobi sociologist, Ken Ouko, being bewitched to get stuck during sex is a fable. “This is just a customary hangup. We know it’s a medical condition, but people, especially Kamba and those from the coast, believe in such. They always say it is a result of witchcraft. Every area has something that people believe in, even if it’s not true,” says Ouko He notes that, “For instance, among the Luos, if an old woman undresses and flashes her behind at you, it is believed that you will go blind and be cursed. But there is no scientific relation between an old woman’s nakedness and blindness. However, because people believe in such, should a woman ‘curse’ someone in that manner, any ailment they get will be attributed to the incident.”

Ouko says witch-doctors take advantage of people’s emotions and fears to their benefit. “There are even cases of men who get persistent erections that don’t return to the flaccid state. This is called priapism, named after the Greek God, Priapus, who was a horny god of fertility and protector of male genitalia. If a man has such a condition, witch-doctors would take credit and claim they have caused it. But this is actually a medical condition that can be managed,” says Ouko. Bishop Morris Mwarandu of Lord’s Gathering Centre makes reference to the Bible that exhorts Christians not to wallow in sin.

“I have no scientific knowledge about the condition, neither am I an authority on black magic. But what is not in doubt is that these things happen because of sexual immorality. It is because somebody is doing something with someone they aren’t supposed to be doing it with,” says Bishop Mwarandu.

He quotes, 1 Corinthians 6:18: “Flee from sexual immorality.” The Bishop says that, “Men are afraid to flee because they will be regarded as weak. So, they let temptation get the better of them. If you are with a woman, and she is married, and you can notice she has bad intentions, flee, for it is better to be a fool in the eyes of men, but be righteous in the eyes of God.”

Modern minimalism isn’t actually minimaliastic
To personalise content, tailor ads and provide best user experience, we use cookies. By using our site, you agree to use our cookies.