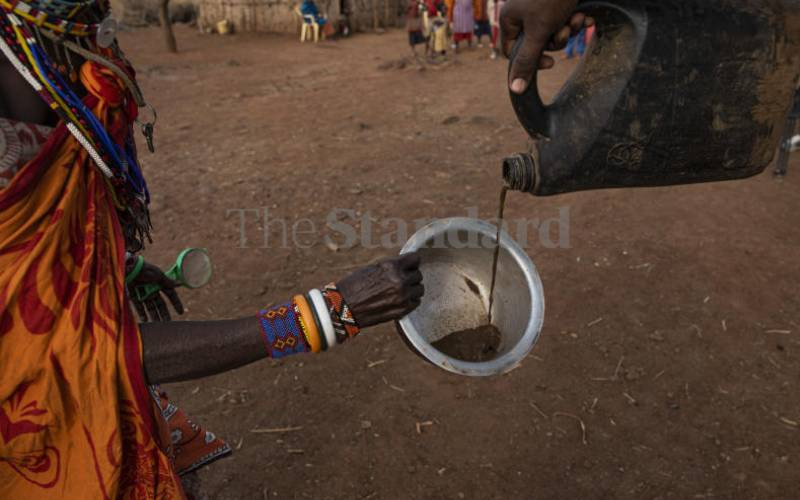 After the curtains fell on the much-hyped global climate change talks in Sharm El-Sheikh, Egypt, last Sunday, delegates trooped back home saddled with expectations and harsh realities awaiting them in their countries.

The global community is looking forward to the implementation of what was agreed on. And whether individual nations got what they wished for from the so-called ‘African COP27’. They must address specific realities at home and respond to a phenomenon that threatens human existence in unprecedented ways.

African countries must step up their efforts to tackle devastating droughts, floods and erratic rainfall, which have hit food production. Locally, things are not the same anymore. Indeed, some four million Kenyans are at risk of starvation, according to the latest data.

And when Mt Kenya residents queue for relief food donated by wellwishers, led by religious leaders, the country should go into introspection. What became of a region that produced surplus food for decades?

Two weeks ago, Nyeri Catholic Archbishop Antony Muheria revived a campaign dubbed Hope4you to raise foodstuff for people from Arid and Semi-Arid Lands (Asals), especially Kieni. Families are facing the worst drought in 30 years. The Archbishop noted that a majority of farmers, who grow crops for subsistence, had not had a substantive harvest in six seasons.

He also admitted that climate change was to blame for the ongoing drought.

“We have not been taking care of the environment, cutting down trees and failing to heed the needs of Mother Nature. We are now facing the consequences of our reckless behaviour,” he told journalists.

Several factors can be attributed to this unfolding scenario, including inefficient food value chains, poor infrastructure, storage facilities and the ever-present middlemen who reap handsomely from farmers’ sweat. The government and policymakers can handle that.

But the elephant in the room is the current climate crisis causing weather havoc in the globe, from flooding in Nigeria, Pakistan and to heat waves in parts of Europe and the Americas. Hitherto food baskets in Kenya and other African countries have been turned into semi-deserts and people have to scramble for the little food being produced.

Global warming attributed to emission of Greenhouse gases into the atmosphere is to blame for turning upside down weather patterns across the world. Can humanity reverse this trend and restore food production systems?

And the big question is how do governments, companies and individuals respond to climate change and allow the planet to accommodate a growing population? Indeed, just last week the world’s population hit 8 billion people meaning more mouths to feed in coming years.

During this year’s COP27, I was amazed at the high-speed meetings, panel discussions, financial pledges, creation of funds and numerous press conferences during the summit. Delegations from all over the world presented their findings, demands and financial obligations to tackle their situations back home.

On the sidelines, I engaged clean energy champions, rural community representatives, refugee leaders, human rights activists and clerics all rooting for a sustainable world and food-efficient systems. Each of them believed in their message and hope that the world heard them loud and clear. They also want action and enough funds to follow them soon.

“This will involve planting more trees in existing forests, practising agroforestry in our small farms and protecting our water catchment areas. Individuals must also take responsibility for their environment through climate-smart agriculture,” he said.

He said they called for a just energy transition that is people-centred and protects the environment. This will ensure clean energy access for all, especially in Africa.

“This includes advocating increased investment in renewable technologies, regulations and systems that incorporate the welfare of communities,” he said.

Mr Kioli, who is also part of the Green Africa Foundation, welcomed the formation of the loss and damage fund at COP27.

“The challenge now is to operationalise it with additional funding, where petroleum companies must share their huge profits towards climate change action,” he told The Standard on the sidelines of the summit.

He also called for the implementation of the Climate Change Act of 2016 and other county laws to manage local challenges. This, he opined, would help farmers produce more yield to sustain food needs instead of just relying on global funding.

Imam Saffer Catovic, from the Islamic Society of North America, feels that religious leaders have raised their voices for humanity. He led calls for a fossil fuel-free world, which he believes will reduce global warming and restore mother nature.

“It was uplifting to see religious people from America and Africa participating in this COP. The theme was together for implementation, where loss and damage fund was to be on the agenda. But there was little discussion on food production,” he told The Standard.

He said the different voices at COP27 will be listened to by the governments and help restore hope in the sustainability of the planet.

“As a person of faith I still have hope that through the stories we have heard here from across all parts of the world, we can restore mother nature. I believe it is the individual communities that will help restore our food systems. Their governments should chip in to ensure food security even as the global community rectifies harmful practices hurting the environment,” he added.

“For the last three months, there has been an influx of refugees into Kenya from Somalia, Ethiopia and Sudan, but who is talking about their issues? In this COP27 for instance, the refugees have lost twice. First, they have been uprooted from their homes and secondly there is no one to raise their issues in major international forums like this one,” she said.

“Restoring food systems for refugees will be a tall order and that is why we are working with them to produce briquettes for their cooking needs. This is a green source of energy that helps protect the environment by averting cutting down of trees,” he said.

However, the briquettes are costly for a majority of refugees, hence Mr Onyango’s call for partnerships with government and private sector players.

Therefore, while clerics, climate change enthusiasts and other stakeholders have taken the lead in restoring food systems to avert starvation, and spoken powerfully to governments in various forums, including this year’s COP, prayer won’t be enough.

More action is needed to feed the world and restore mother nature.

Help! Outside pressure is bringing me down
Living
By Chris Hart
15h ago
How to rescue your weakening love affair
Marriage Advice
By Chris Hart
15h ago
How you can consistently climb the career ladder
Career Tips
By Kirsten Kanja
15h ago
Why do good men friendzone women?
Relationships
By Stevens Muendo
16h ago
Girls trip sequel to be filmed in Ghana
Entertainment
By Peris Wambugu
Jan. 27, 2023
.