Women in sports: Aiming at happiness

Shehzana Anwar, the only Kenyan to have qualified to compete in the 2016 Olympics as an archer, talks about making a name from a sport she loves.

Ask any Kenyan on the street who Shehzana Anwar is. You will most likely get the wrong answer. Why? Because to most Kenyans, archery, the sport, is not top of mind.

“It is not like football, or athletics, or hockey – sports that are well recognised,” Shehzana says.

However, she says when archers meet, they argue about players, games and competitions with vigour, much like fans in adrenaline-drenched sports do.

Shehzana is best known for bearing the Kenyan national flag at the 2016 Rio Olympics. To earn a slot into the Olympics, she had to save up and sponsor herself – pay for her air ticket, accommodation and entry fees – to the 11th Africa Archery Championship where she beat five other top archers in the continent.

For Shehzana, it all started with a family weekend outing in 2002 at the former Splash Grounds (now defunct) that was on Lang’ata Road.

“There was a game where players shot balloons with arrows. Every time I popped a balloon, I got so excited. My parents would shout, ‘Try again! Try again!’”

Some officials who operated the facility noticed her love for shooting. “They told my parents to sign me up,” she says.

ALSO READ: At 13, I played cricket for the national team

Shehzana began going to the club regularly. The sport quickly became a hobby. This went on for about two years, at which time she signed up for a field archery competition in Nairobi where she won the Women’s Barebow title with 323 points. She not only beat the girls; her scores eclipsed the winner in the men’s category.

“I was so happy: this was the point I decided to concentrate on archery and go professional,” Shehzana says.

Shehzana’s first international competition came in 2005. Kenya had been offered two slots at the World Games in Germany.

“An older gentleman and I were nominated to represent the country,” she says.

It was not until later that Shehzana realised the universe had set her on a path towards archery since her toddler days.

“As a child, I played Robin Hood: I remember cutting my mother’s trees to make bows and arrows to play with,” she says.

ALSO READ: Breastfeeding at half-time: Motherhood in the eyes of female athletes

Overall, Shehzana describes herself as ‘restless’. She loved the outdoors. She loved firing up her muscles, playing games and being active.

“I was less interested in academics compared to being active in the field,” she says.

Academics, she says, required concentration. Yet she was not the type of person to calm down and focus her mind.

“So, when at 13 I fell in love with archery, I took it as a challenge to work on my concentration,” she says.

She adds that unlike adrenaline sports like football and basketball, archery requires deep concentration and calm. It taught her the two qualities she lacked: calmness and concentration -- the qualities that made her dislike academics. 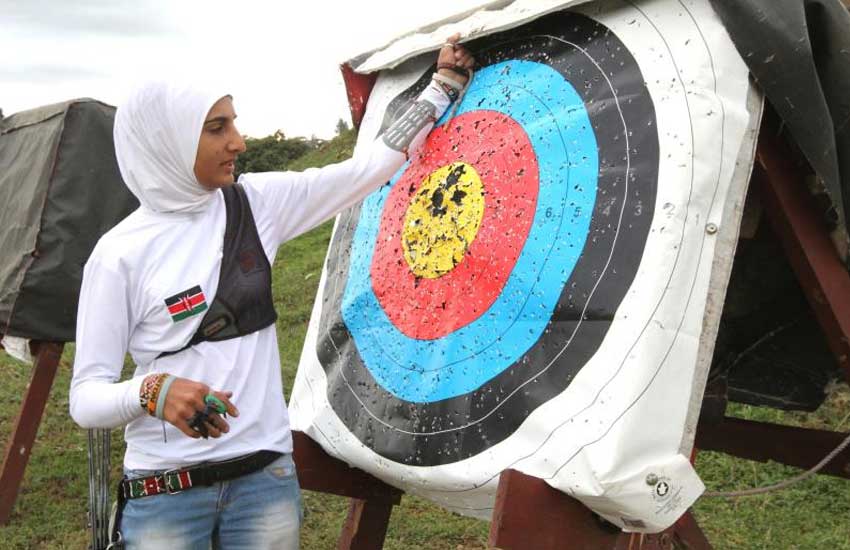 Today, when you Google ‘Kenya archery’ the first personality you read about in the hits would be Shehzana. Now 30, there is no doubt that she has made a name for herself after 17 years in archery.

And while she loved sports more than academics, she was not entirely in an unfamiliar territory. Shehzana hails from a family of sports achievers. Her father, Azar Anwar, is a former Safari Rally champion. Her big brother is a former Quad Bike national champion.

People often ask her what her degree is on. “I tell them archery,” she says. Because though she is a high school graduate, Shehzana later dedicated her energy on archery.

“I have done coaching courses with World Archery. Beyond being a player, I am a coach and a trainer,” she says.

She works part-time taking inventory at a pharmaceutical company. But she also earns by teaching archery classes.

Unfortunately, she says, the sport hasn’t been commercialised as much as leading genres like football and volleyball. What this means is that an archer is not likely to maximise the full potential of making money as an archer.

To start with, she has had to sponsor herself to many competitions. “Sometimes my friends tell me that I have given so much of my life to archery than the sport has given me,” she says.

Monetary shortcomings notwithstanding, archery is Shehzana’s comfortable place. When she is sad or bogged down with emotions, she goes shooting at the range.

The sport, she says, deflects stress from her precincts. It gets her to higher spirits. She hopes that soon more commercial opportunities would be available to archers and lovers of the sport alike.

But even if that does not change, Shehzana says her love for archery is unmistakable. And she will continue shooting even in old age.

At 13, I played cricket for the national team

Breastfeeding at half-time: Motherhood in the eyes of female athletes

Weight-lifting rescued me from alcoholism

It took me a while to find out who I am