Jacky Vike's baby bump photos are still trending, two months after she gave birth to a baby boy. Motherhood, it seems, isn't just about to slow her down.

Jacky Vike has fond memories of her childhood. The actress who appears as Awinja, the nosy and meddlesome house-help of Wilbroda (Jacque Nyaminde) in the local TV drama, Papa Shirandula is a far cry from her character. The third born in a family of four is all praises for her mum who raised them after they lost their dad. "Mum was a business woman and she did her best to give each of us a decent education," Jacky says. "Dad passed on while I was in high school, and it was a big blow to our family but mum took it in her stride."

Born and raised in Eastleigh area in Nairobi, Jacky attended Heshima Primary School and after high school, joined a travelling theatre that staged plays in schools. "Mum wanted me to be an air hostess and even enrolled me in a college and paid my fees," she says. "But my heart was not there so I would go to Kenya National Theater for rehearsals instead of attending school."

She says her mum hit the roof when she discovered what she had done. "However, she calmed down when the money started coming in and became supportive," she says. So what does she think now that she is a mum and raising her own family? "You really get attached to the baby," she says.

Together with her partner, they welcomed their baby boy, Thandiwe on June 3 this year. Jacky is adopting to motherhood well. She admits it is no walk in the park but a learning experience. "These little people do not come with manuals but I'm glad Thandiwe is a playful and happy child," she says. She has decided to give her child undivided attention, at least for the first three months. "His immune system is still developing and I would rather stay home with him," she says. "It's been an amazing journey and I'm glad his paediatrician says he's gaining weight well."

"Motherhood has really changed my life. I now know what I value. You get to experience genuine love," she says. She has also taken time to reflect about herself and enjoy her 'me time'. "It has given me a chance to bond with my son and his daddy." 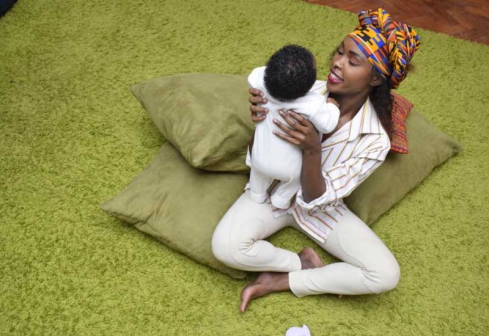 Pregnancy did not slow Jacky down and she continued with her acting schedule. "Thankfully, I was spared morning sickness. I was very active and nature rewarded me with an easy birth. Babies are indeed a blessing and mine came with blessings," she says. "I was lucky to get several endorsement gigs with various leading brands. I even got a chance to model maternity wear for a leading clothes line," she says. "Pregnancy was good to me." She says that when it comes to parenting, "that is where the rubber meets the road."

She says it can be challenging, especially since her son, like most newborns, prefers to sleep all day and stay awake at night. "It is a feeling you can't describe, though. I'm taking one day at a time," she says, adding that her mother has been helpful with the infant. She's excellent with the dos and don'ts of parenting and has made it easy for me." But had Jackie always wanted to be an actress? "Incidentally, I started acting in Sunday school. I sharpened my talent through playing different roles in primary and high schools and during drama festivals," she says.

After high school, she joined a travelling theatre for a year and was with Heartstrings Kenya theatre troupe for quite a while. She later joined Media School Africa where she pursued TV production. "I hope to start my own production company one day and do movies," she says. Making it into the acting industry wasn't easy though. Jackie remembers going for auditions, and not getting selected.

She was, however, grateful when Charles Bukeko (Papa Shilandula) remembered her from an earlier audition and believed she could pull off the role of Awinja. Does acting put food on the table? "It's basically enough and I cannot complain," she reveals. Her role as Awinja has opened up a world of opportunities for her. She has landed lucrative advertising and endorsement deals for several brands. She is often called upon to emcee at corporate events.

When not busy acting, Jacky enjoys listening to music, travelling, hiking and spending time with her family. She says she is a God-fearing woman who is loving and caring. "However, I tend to trust easily, which is my biggest weakness," she says. As her own little way of giving back to society, Jacky gives talks at learning institutions. "Our target is the youth and we base our talks on reproductive health, career choices, among other issues that affect young people," she says.

So will we be seeing Jacky on our screens again? "Motherhood is a blessing not a hindrance to live your life," she says. She is currently on maternity leave but says she will definitely be back when she is good and ready. Jacky's life hasn't always been rosy. She confesses that getting where she is wasn't easy.

"The biggest challenge I faced as an upcoming actress was inconsistency in the availability of jobs," she says. She is forever grateful to the producers of the local drama, Papa Shirandula who gave her an opportunity to showcase her talent. "The Papa Shirandula show really transformed my life. It has allowed me to explore more with the character of Awinja and create a fan base," she says. 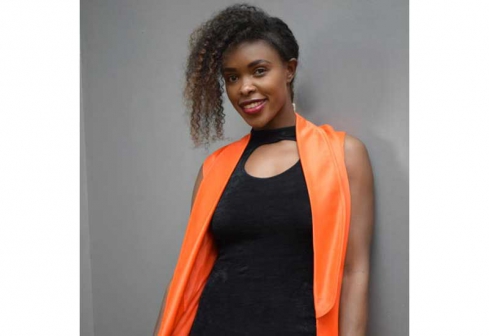 She also remembers struggling with finances when starting out, especially for her travelling theatre tours or to shoot a pilot in a bid to market herself. She has acted in a number of local movies though she admits they barely make much. "Unfortunately, Kenyans will rarely go to theatres to watch movies and many buy a pirated DVD of the movie as opposed to the original," she says. "This definitely kills the industry and the actors as well, making the industry quite unreliable." Life dealt Jacky a huge set-back when she lost her brother in 2011 in a traffic accident. This unfortunate incident plus the loss of several of her friends has taught her to value life.

When she is giving motivational talks in high schools, it breaks her heart to see young girls suffering from self-esteem issues. She strongly believes that what a man can do, a woman can do better. "Let's stop competing. There's enough room for each of us," she says. "As women, we can conquer the world by supporting each other."

Jacky believes in appreciating life. "Life is precious," she says. "Tell people you love them now." She also believes in family. They have your back always, she says.

What legacy would she want to leave? "I do not want to be forgotten," she says. "I want to be remembered as someone who impacted lives, no matter how small.

Mum slammed for feeding her baby during a job interview