Ladies, this is why we don't want to go shopping with you 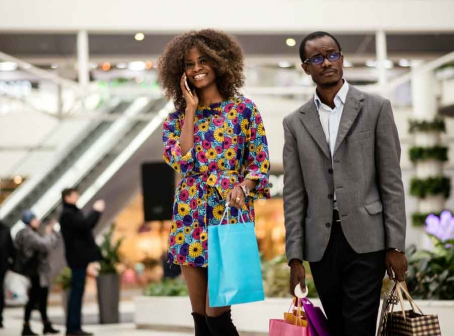 First, as menfolk will concur, let’s perish the thought that men ‘shop’ per se, actually, they just ‘buy’! Shopping, just like wedding excitement, is a preserve of women, or so it seems. Ordinarily, if men must go ‘shopping’, they treat it as a mission, which they execute with surgical precision and decisiveness.

Most told this writer that when they walk into a shopping centre, they know exactly what they wants to buy. Thus, they go for the targeted good (or service), grab it, pay, and ‘flee’ the shop (as if it were a crime scene!). If anything, impulse buying— a weakness women have been grappling with since time immemorial — is alien vocabulary to many men.

Just so you may know, women’s love and passion for shopping is legendary. To most, shopping is an experience. It’s an event. It gets even funnier because to some shopping is a hobby: A pastime activity they engage in, just for fun or to, err, release stress! For the uninitiated, the genius who coined the phrase, “Shop till you drop” did so in memory of a woman who shopped for so long and, besides deadly exhaustion, suffered a massive heart attack before she collapsed and died after, with her man in no sight, she saw her huge bill!

According to George Mukolwe, he hates shopping with his partner because, besides a host of other reasons, she can spend a whole day while at it. “Desperate for approval or endorsement, once they’ve bought an item, some women can even hang around, just to see who else will buy the same,” says Mukolwe, adding that it’s a small wonder that the Emelda Marcos of this world, for instance, own thousands of pairs of shoes! And collect bale upon bale of clothes — some of which, of course, they don’t use because they no longer fit well or are out of fashion.

The last time Mukolwe accompanied his partner for shopping, he experienced pure torture. He says her indecisiveness drove him up the wall, and vowed to never ever tag along when she is going for shopping. “We left the house with one mission; to buy a dress. My friend, we spent the better part of the day moving from shop to shop and back and forth. She ‘wasted’ hours deciding the colours, comparing prices, fabric type and whatnot. We went to a couple of shops before she dragged me back where we began, after she had, presumably, made up her mind,” he agonises.

He adds that whenever he sulked and frowned at her indecisiveness, she would get irritated, engage in uncalled for hair-fluffing before changing the topic to a none issues like the weather!

Just like gossip, there are items women just can’t resist. For instance, clothes, shoes, handbags, perfume and related accessories. Even after buying, it’s common to see a woman still going round, checking the same in other shops, just to compare prices and designs and to see whether she was conned or got a worthwhile bargain.

Woe unto you if she happens to be the type that likes playing mind games. What’s more, such characters are in the habit of asking their men ‘Russian-roulette questions’ that would land one in a lot trouble. “Babe, does this dress make me look fat?” she would tempt you. She knows she is fat, but expects the dress to make her look skinnier! Oh, please. How now?! Come on ladies.

At times, she will push the joke further, and if you are not diplomatic with your answer, things will go terribly wrong. Well, she knows exactly what she wants, but will ask you, “Sweety, which of these two dresses is the best on me?”

As a man, most of the time, you are advised to avoid answering this trick question. Reason? Half the time, it’s asked just to determine whether you ‘know her well’. I mean, her girlfriends know her favourite colours, tastes and preferences, so do her gay friends! So who are you to claim to be her partner, yet you are clueless? Very intelligent creatures, these women.

trying on tens of clothes without buying any

Alternatively, she might ask for your opinion, which she won’t care much about anyway because she already made up her mind, after all.

“When I have the misfortune of getting dragged along during shopping, I see hell. When she disappears into the changing room, I always sit pretty and engage myself by reading a newspaper because I won’t be seeing her for the next half an hour or so. Never mind she ducked into that place with only two outfits to try on. At times, I sit there, meditating about life...and thinking about God and why he only makes bad things to happen to good people like myself,” jokes Mike Odhiambo.

Odhiambo goes on to give an anecdote in which his wife spent almost an hour, trying on two dresses. Interestingly, she emerged from the changing room with her face contorted like that of a puff udder rearing to strike, disgustingly clicked and hissed, “Mscheew! None of them fits well!”

“Eish! You are kidding me! So you are not buying any of them?” He exclaimed. “Yes! Twende (Let’s go)!” She furiously shot back. Despite having sent him into paroxysms of rage by wasting his time, he found it so hilarious that he couldn’t hold back his laughter. He says she sulked big time afterwards.

Githinji Mwaura says he once had a partner who would write a long shopping list, but never stuck to it. She always ended up impulse-buying, of course at his expense. Which begs the question, could men’s fear for shopping with women stem from the fact that they end up spending more money than they had planned for?

“Despite her social class or however rich she may be, most woman always get their men to spend money on them. No man wants that in this harsh economic times. Contrary to popular belief, some of us men really like shopping, but hate to do so with women,” says Githinji, unsuccessfully suppressing a chuckle.

A defensive Mercy Mueni, a self-confessed city shopaholic, argues that women are decisive even when shopping for items such as clothes. And it’s just that, unlike men, they have many varying options fashion and style-wise, which require time to mix and match.

“For us (women), unlike guys, whose styles and fashion are very limited, we not only have to sample but try on so many clothes, shoes etc. Remember we also have to figure out the possible combinations of various accessories,” argues Mueni. Rachel Nimo, a city-based air hostess, says shopping is not just the preserve of women.

“There are men who are also suckers for shopping. It all depends on the item being bought. When shopping for ‘masculine things’ like tools or car spare parts, men always take forever. Assuming you are a woman and you accompany a man to a show room, an electronics shop or at a hardware store, you will be pissed off, too. A man can stare at a spanner or a screw driver as if it were some ‘hot’ woman,” laugh Mimo.

“My boyfriend likes books so much. He can spend hours in book stores. When shopping, he can read a whole book at a bookshop counter. He becomes all giggly, chuckling whilst rubbing hands in glee, as you seethe with anger,” she adds. There are, however, some men who have no qualms accompanying their women for shopping. Take Justus Musau, for instance. He says he says he doesn’t mind shopping with a woman. But he quickly throws in a rider, saying, “Only when at the initial stages of dating!”

“It’s a lot of fun, especially if you’ve just began dating. When shopping, particularly for clothes, you get to appreciate her beauty and curves each time she tries on a different outfit. You get away with asking her to turn around, without coming off as a naughty fellow,” jokes Musau, adding that it’s through such experiences you get to know her tastes, preferences and gift ideas.

Goro Mutahi, a city-based psychologist, says that part of the reason why men fume at the idea of going shopping with their women is because they like dominating and hate being led. “Men always want to lead. Shopping tends to be a ‘woman thing’, and when at it, they tend to take full control. But it’s great shopping with women because you won’t waste time asking attendants for this or that. Women know malls, supermarkets inside out; they know what’s tucked in this or that obscure corner. Men hate it when they have to push loaded trolleys and follow their women around. At times back and forth. Again, there are more females in these places and women tend to feel at home as men feel ‘odd’,” he concludes.

Interestingly, it’s not like women enjoy tagging along men when shopping, if only they could give them the cash, the better, some said.

Man republic: Would you marry a woman who earns more?
My Man - By Dickson Aseri

Men only: You can't grin and bear it if you have a toothache
My Man - By Tony Mochama

Man republic: Itinerary for the men’s conference
My Man - By Dickson Aseri

Men only: If you have a missus, but you trust your mistress
My Man - By Tony Mochama

Men only: Dining with a diplomat on a Sato night
My Man - By Tony Mochama

Man republic: How did men start going to baby showers?
My Man - By Dickson Aseri

Men only: What I learned from a doc about cervical cancer
My Man - By Tony Mochama

Bad bachelor: Six degrees of separation from the sea, Fridah and me
My Man - By Art Amacho