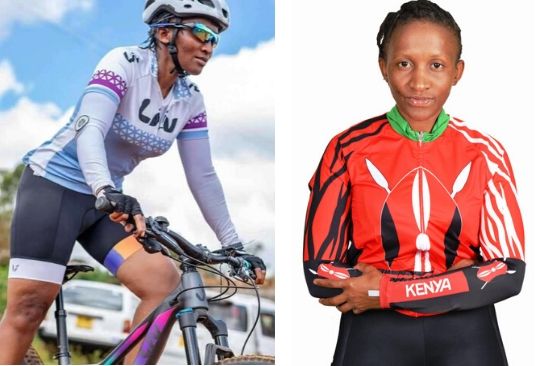 Salome Jeniffer Kanini, 32, lives and breathes cycling. It is her passion, the reason she quit her job in 2016 and her motivation for getting up in the morning. She explains how she discovered the sport.

To Salome, cycling is more than just a calling, it’s a legacy she hopes to pass down to other young women and girls. Her love for cycling has led her to not only participate in local cycling events, but also represent Kenya on the global arena.

Surprisingly, it all began with a whim back in 2014 when Salome saw an advertisement on TV about the 2015 Tour de Machakos, an annual cycling race. She says the advertisement came in a season of her life where she found herself lost and restless. She was working at the Nyamira County Senator’s Nairobi office, and was making enough to live a relatively good life, but she says she was partying a lot and drifting through life.

When she heard about the 50km race, she knew that she had to participate. Without much practice, she emerged third in the women’s category, and has never looked back since.

“If you ask me what inspired or pushed me to participate in the race, I do not have an answer. All I know is that something in me would not let me rest until I participated. I remembered how I used to love riding as a young girl. I would ride my bike everywhere; to church, to the market and to the posho mill; like any other teenager. In fact, it had been over 10 years since I had ridden a bike but that did not deter me. I got a simple bike and participated in my first cycling race,” says Salome.

After the race, she tried to go back to her normal life while still trying to balance her new found love of cycling but found that it was difficult. After much soul searching, she quit her job in December 2016.

“It was not an easy decision. I knew that I had to give it my all if I wanted to be a pro cycler. I wanted to participate in as many competitions as I could, and to even represent Kenya internationally. Working full-time prevented me from training adequately,” she says.

Last year, Salome represented Kenya for the first time in cycling races at the All-Africa Games. In addition, the Kenya Cycling Federation has recognised her as a performing cyclist in Kenya and she is also the ambassador for Liv Bicycles in Kenya under Bike Shop in Karen, a Liv Bicycles distributor.

However, she says that it has not been an easy journey and that the road continues to be riddled with many challenges. The first was that, in the beginning, her family was not amused when she left employment to pursue a pro career in cycling. “My family was concerned about my financial stability, but they now see how I am able to earn a living from my career and they have seen that my passion for cycling is not just a passing phase, and as a result, are my biggest supporters,” says Salome.

However, her first two years after employment were difficult. She is eternally grateful to Esther Passaris who took a chance on her and not only offered her a flexible job as a sports officer for a year in 2018, which enabled her to continue training, but also mentored her.

“I first met her on social media and told her about my dreams and my struggle. She was so interested in knowing more about me, why I trained and how I made my money. We talked and she later offered me a job. While working for her, she mentored me and even advised me to start a community-based organization (CBO),” Salome says.

In 2018, Salome started DadaRides, a platform that helps her nurture and mentor the next generation of female cyclers and to create awareness and change misconceptions about cycling. The CBO also builds relationships in the cycling community and advocates for a better environment through non-motorised transportation.

“Few people recognise cycling as a sport. Most people believe that it is simply a means of transportation. Women face another hurdle: in many communities today, cycling is still a male-dominated activity. Although women enjoy riding when they are young, they give it up as they get older.”

When it comes to training, Salome does everything from stretching and jogging to weight lifting. Depending on her day, she also cycles for two hours (50-60kms), four hours (90 to 120kms), or five hours (150kms). “I try to balance my schedule; I train for three days a week because I have to work and earn a living.”

But is she able to earn a living from cycling? “Yes and no. As a pro cycler I should be able to earn a living through sponsorship but I currently do not have a sponsor and have never gotten sponsorship. I make my living from other activities in the cycling industry. I am a bicycle mechanic, a cycling coach at Moi Educational Centre and a cycling event organiser,” she says.

Salome is also a personal coach and helps clients learn how to cycle and lose weight through the sport. “Business has been good especially with the lockdown with more people staying home. I have gotten many clients. This week alone I had about six clients,” she says.