Nakuru woman, college girl batter one another thoroughly over man, as crowd cheers 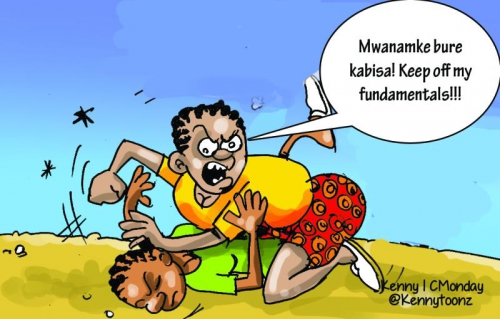 Residents of an estate in Nakuru East constituency were left rolling on the ground with laughter after two women went hammer and tongs at each other, exposing their nakedness in the process over — get this — a man!

The two women, a single mother and a college girl, engaged in a verbal spat that progressed into a full-blown fight, after the former accused the latter of ‘snatching’ her boyfriend away.

The college girl was new in the residence and hosted by her relative, and had become a tight buddy to the single mother with whom they shared gossip as they whiled time a way.

According to a source, the college girl was a ‘party animal’ who would stop at nothing to have fun.

She was in the habit of going out to unwind every evening and only returned late or early the following day.

Meanwhile, the single mother had a flashy boyfriend who frequented her house, and when the college girl noticed him, she began throwing herself at him.

In a very short time, the two broke the ice, and began making passes at each other.

Before the single mother knew it, the two had become an item--in fact, madly in love, or so it seemed.

The man was the older woman’s source of financial support, and there was no way she was going to take the loss lying down.

When news reached her that her friend was grooving with her man, and that she was on the verge of sharing resources or even getting dumped, she decided to confront the enemy.

“The single mum could not stand the fact that her friend would sneak from her host’s house and go out with her man,” revealed a neighbour.

The mother timed the college girl was in her host‘s house, and confronted her.

She shouted -- for all and sundry-- at the college girl, disparaging and calling her a “husband snatcher”, to the chagrin of her host.

The two began exchanging bitter words that drew all the tenants to the house. Rather than endure the torrents of abuse from the charged adversary, the college girl descended on her with kicks, slaps as she tore her clothes.

They pulled and tugged, and found themselves outside the house.

The single mother fought back shouting,”Huyu mtu kwa nyumba yenu ni malaya. Mnajua kila usiku yeye huenda wapi (The woman you’re hosting is a prostitute! Do you even know where she goes each other night)?”.

All hell broke loose as they squared off, tearing each others clothes.

Tickled men egged them on, as embarrassed women slithered away from the scene, preferring to watch the drama through their windows, leaving the two to disgrace themselves.

It took the intervention of the landlord who arrived at the scene to break the fight.

He ordered the two out of the compound, accusing them of making noise and disturbing peace.

Host’s to the college girl sent her packing and apologised to the other woman, who has since moved houses to save herself embarrassment.