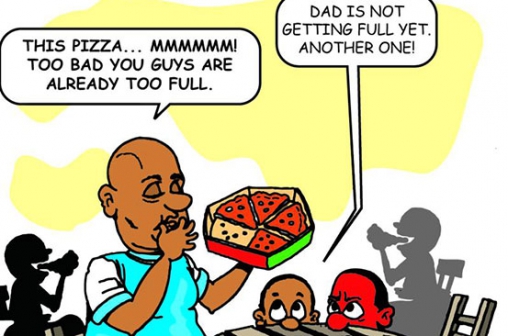 With more money in their pockets, Africans are eating more fast food and adopting more sedentary lifestyles, leading to a surge in obesity and associated diseases like diabetes and cancer, experts said early this week.

Rates of obesity and overweight are rising in nearly every country in the world, the Global Nutrition Report said, describing malnutrition as the “new normal.”

One in three people worldwide are experiencing malnutrition, it said, with 44 percent of countries facing serious levels of both under-nutrition and obesity.

Obesity is a form of malnutrition as the body does not receive sufficient nutrients and people have too much salt, sugar or cholesterol in their blood.

“Many countries now across the continent are facing a double burden of malnutrition,” Shane Norris, a nutrition expert at the University of Witwatersrand in South Africa, said in a phone interview.

While under-nutrition is falling globally, few countries are succeeding in tackling obesity and the four main non-communicable diseases (NCD) linked to it: diabetes, cancer, cardiovascular diseases and chronic respiratory diseases.

NCDs are projected to become the leading cause of death in sub-Saharan Africa by 2030, according to the World Bank.

South Africa is the most obese country in sub-Saharan Africa, Norris said, with over 40 percent of adults overweight or obese.

“The malls are the ‘in’ thing,” said Zachary Muriuki, a nutritionist specialising in diabetes with Kenya’s health ministry.

“We are seeing a trend of obesity cases rising,” he said, blaming unhealthy diets and increased use of cars.

Culture also plays a role, particularly for women who are seen as successful, happily married and healthy when they are overweight, experts said.

“Being overweight is seen as a positive thing,” said Norris, adding that South Africans believe it means someone does not have HIV and AIDS, which often leads to weight loss.

The report called for donors to spend more on non-communicable diseases, which accounted for less than two percent of their health spending in 2014.

Testing and treatment for malaria and HIV and AIDS is often free, which is not the case for NCDs, Muriuki said.

Non-communicable diseases account for half of hospital admissions in Kenya, the government says.

“Long term management of these diseases is very expensive,” Muriuki said. “We are struggling as a country, trying to manage cancer. We have cases and cases in our hospitals lining up to go through chemotherapy.”

My mum once told me that young children regard their mothers as they would the Almighty God. I thought she was being a tad narcissistic at the time but since having my own child, I can see clearly that she made a good point.

By Tobias Chanji | 3 days ago