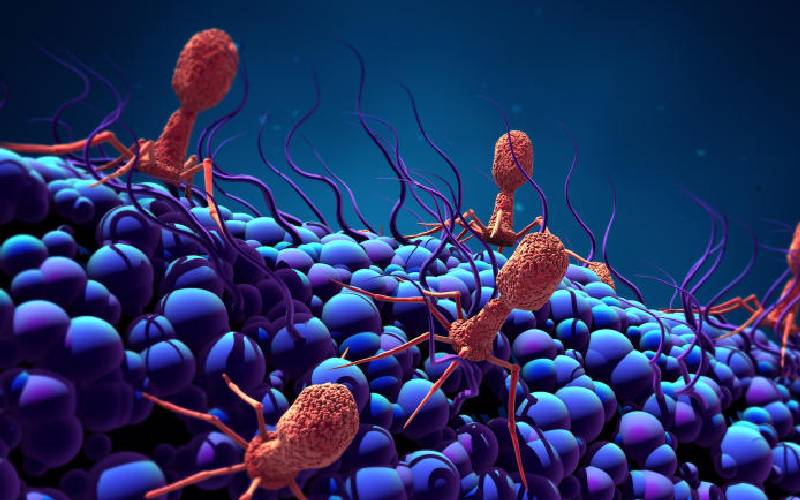 Scientists are exploring the possible use of bacteriophages to curb anti-microbial resistance (AMR) in humans and animals.

Bacteriophages or ‘bacteria eaters’ also called phages are tiny virus-like organisms found in nature and said to be natural enemies of bacteria.

Dr Lillian Musila, the principal investigator at the Kenya Medical Research Institute (Kemri), has been working with bacteriophages as therapeutic alternatives to antibiotics for the treatment of multidrug-resistant clinical pathogens.

Dr Musila says scientists opted for bacteriophages to kill bacteria as each is specific to a particular type of bacteria.

“The phages work by invading the specific bacteria where they replicate and kill it without targeting any other bacteria,” she explains, adding that “the phages only destroy the harmful bacteria and leave out the useful bacteria unharmed, unlike antibiotics.”

The scientist argues that the bacteriophages have other advantages in that, unlike pharmaceutical products which involve mixing of compounds, the phages are naturally occurring in the same environment as the multidrug-resistant bacteria.

Anti-microbial resistance AMR is a public health threat causing more deaths in Sub-Saharan Africa than HIV and malaria combined. It is estimated that by 2050 it will have caused over 50 million deaths globally, if not checked as superbugs resistant to all known antibiotics are increasing with few antibiotics in the pipeline to treat extensively-drug resistant bacteria.

Just recently, Kenyans took to Twitter and other social media platforms to raise concern over the sale of prescription-only medicine-like Augmentin (Amoxicillin/Clavulanic acid) - on online platforms.

Pharmaceutical Society of Kenya (PSK) issued a statement stating that the sale and advertising of prescription medicines outside of the Pharmacy and Poisons Board rules and guidelines is a threat to national security.

However, scientists believe phages which have been used since 1919 to treat the sick in Europe before discovery of antibiotics in 1923, can be more useful.

Though bacteriophages are the next frontier in the battle against Multidrug-Resistant Bacteria (MDR), Dr Musila says their one downside is attacking only particular bacteria and thus making it difficult for broad clinical practice-but that will be dealt with via having a library of bacteriophages for use on various bacteria.

Kemri has a small collections of phages, says Dr Musila “but we need to pull more phages from different research institutions into a big library where we can choose almost 50 to 100 phages for clinical use.”

Another concern about phages is safety as they’re living things and for people safety and long-term effects are key since one would be introducing them into one’s system.

Phages have two different life cycles such that when they infect bacteria, they can either replicate or kill, but they also integrate its DNA into the host.

Dr Musila explains that studies they’re undertaking carrying before using phages for therapy are to sequence the whole genome and see if it has any of the genes that may cause it to integrate into the human genome.

“We are doing these checks to satisfy the requirement of safe use of a living organism for therapy because there might be concerns that the phages may integrate into our genomes and cause changes,” she says noting that the phages will first be used on animal models to examine dosage, safety and their final destination in the body.

Dr Atunga Nyachieo, a researcher at the Institute of Primate Research (IPR), believes that carrying out our own research, especially on phages, would stop Kenya from being used as a market for therapies.

“We want to be a part of the system that creates medicine or therapies for ourselves,” says Dr Nyachieo.

Dr Gichuhi Mwethera, Director of IPR, argues that the Covid-19 pandemic taught the world that a country needs to develop its own capacities for dealing with diseases.

“Kenya imports over 90 per cent of medicine and we have to start thinking how we can be self-sufficient in terms of medical interventions,” says Dr Mwethera.

Dr Mwethera adds that IPR is using monkeys for developing human drugs and vaccines as monkeys and people are closely related and if a drug or vaccine works in a monkey, it would easily work in a human.