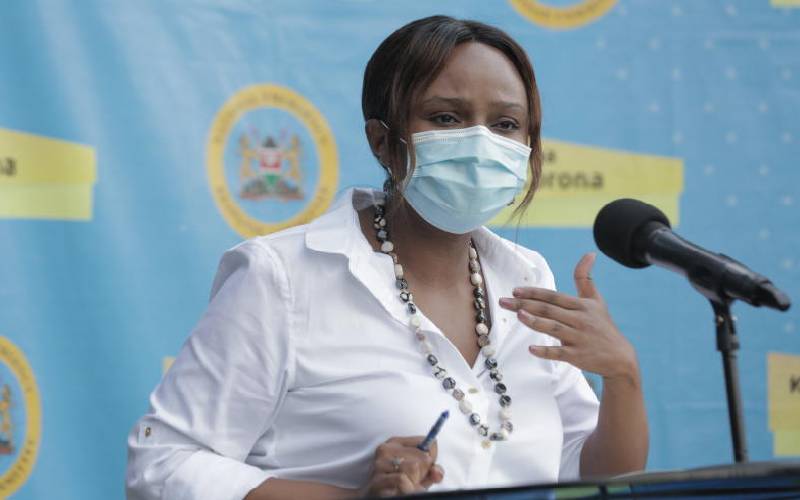 The total number of confirmed Covid-19 cases in Kenya has risen to 9,726 after 278 more people tested positive for the virus in the last 24 hours. Health Chief Administrative Secretary (CAS) Dr Mercy Mwangangi (pictured) made the announcement on Saturday when she led the ministry officials' visit to Kwale County. This brings to 207,987 samples tested by the ministry so far since March when the first case was reported in the country.

In the previous day, 473 cases of the virus were reported. Mwangangi urged Kenyans to take serious measures put in place to curb the virus spread saying the number of infections will continue to increase, especially with the lifting of the movement ban. The CAS also reported that 99 more patients had been discharged, raising the total number of discoveries to 2,832. The number of fatalities also increased, following the deaths of three other patients, raising the total to 184. The new patients were found following the testing of 1,403 samples, which raised the total of samples tested in the country with Nairobi leading with 5,350 cases with Mombasa recording 1,722.

The youngest was a year old and the eldest 86. The CAS commended those Kenyans that have continuously complied with containment measures On Kwale county, the CAS said the total caseload stands at 139 cases from 1,598 samples all of which have recovered except nine who are doing well on home-based care. She hailed Kwale Governor Salim Mvurya for efforts put by Mvurya’s administration to combat the disease Kwale has 424 bed capacity with 10 ICU beds and 13 ventilators

According to Mwangangi, Kwale has trained 1,019 health workers and recruited an additional 160 health workers to combat the disease. The CAS the ministry's tour is to assess the preparedness of county governments in dealing with the virus and what the counties need in the mission. Since March 13, 2020, when the first case was confirmed in Kenya, the country has reported more than 6,500 confirmed cases and over 149 deaths.