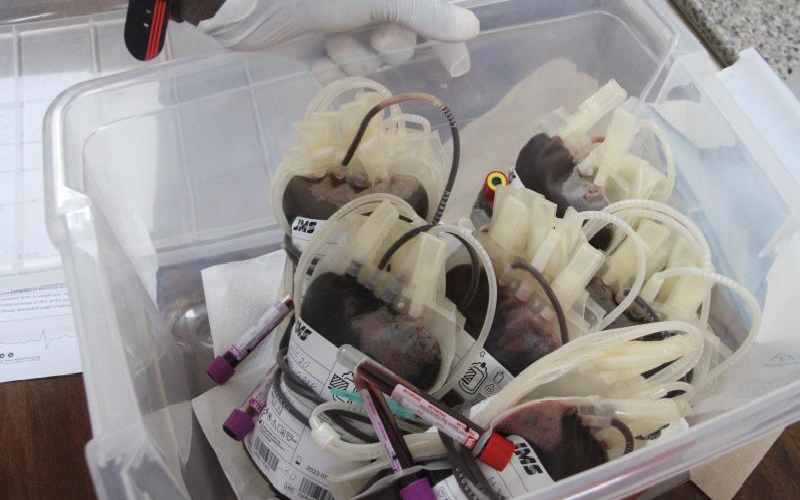 Kenyans have almost exclusively depended on the youth to fill the blood banks, but now the source is getting contaminated. “We are appealing to Kenyans, especially the youth to turn up in large numbers and donate to save lives,” pleaded Dr Rashid Aman, the Chief Administrative Secretary for health while launching this year’s blood donor drive. This year, he said, the ministry had partnered with Facebook especially to reach the youth who donate almost 80 per cent of   the blood collected in the country.

60 per cent of the blood in the country is donated mainly by secondary school students with 20 per cent from colleges and universities all aged from 16 to 25. Recently the Kenya National Blood Transfusion Service (KNBTS) tapped into the global Pledge 25 campaign. The campaign targets at engaging and retaining a pool of voluntary student blood donors who pledge to donate at least 25 times by the time they are 25 or in their lifetime. Members pledge to maintain a healthy lifestyle, free from sexually transmitted infections and transfusion-transmissible infections (TTIs) such as hepatitis B and C, HIV, and syphilis. Infected blood

SEE ALSO: No safety gear nor pay: The risky life of health volunteer

The rationale to invest in the16-25-year-olds for blood donations is based on the assumption they are less likely to carry infectious germs compared to the older generations. But in what may be a major setback, the agency has just learned that the young blood may not be as clean as has been assumed. A team from the University of Nairobi, working with the KNBTS tested 1,000 voluntary blood donors aged between 18 and 25 years and reports worrying rates of hepatitis B infections. Hepatitis B virus or HBV is an infection of the liver which can cause scarring of the organ, liver failure, cancer and even death if untreated.    It is transmitted through infected blood products, unprotected sex, and contaminated items such as medical equipment, needles, razor blades, unscreened blood transfusions or mother to child at birth.

In the current study, like in several other recent investigations hepatitis B was suspected to be transmissible through body tattoos. The researchers had engaged prospective donors from various educational institutions in Kisumu, Siaya and Homa Bay counties in Western Kenya. They had collected blood samples from the volunteers and tested for hepatitis B at the Kisumu Regional Blood Transfusion Center. Samples found positive for hepatitis B were referred to the Regional Blood Transfusion Laboratory in Nairobi for confirmation. 34 of the samples, or 3.4 per cent, were confirmed hepatitis B positive which falls within the rates of HBV prevalence in the general population. “It should be worrying that the virus appears to persist among the young donor population despite reported blood donation safety enhancements,” said study authors led by Hilary O. Awili of the University of Nairobi. This, they say  is an indicator that the efforts so far put to improve donated blood safety are still not adequate in ensuring donor blood is safe for transfusion. Of tattoos and hepatitis B The study published, two weeks ago (19th June) in the journal BioMed Research International says a significant number of the adolescent blood donors had a history of high-risk sex behaviour. Such behaviour included having multiple sex partners, unprotected sex and sex in exchange for cash.  This group had the highest number of HBV positives followed by those who had tattoos or other body scars. Adolescents with tattoos and other body scarring, the study says were more likely to be hepatitis B positive compared to those without such esthetics. “This practice is very common among the adolescent and is achieved through processes that involve cutting through the skin, removal of skin parts, chemical imprinting, and other techniques that may cause skin lacerations,” wrote Awili. Because the process involves equipment that is not sterilised, the authors suggest could be exposing adolescents to infections including HBV. “It is the in thing,” says Lucas Kanai, who hawks his tattooing services in Umoja II, Nairobi. Kanai, charges from Sh140 to Sh200 for a small tattoo, but says he never heard of hepatitis B. “But I am just a small fish in a shallow pond, the big boys in upscale estates charge up to 50k  for a full arm works,” explained Kanai. In an earlier interview with The Standard, Eliamin Ali, an architecture graduate from the University of Nairobi now turned tattooist, said a full bodywork could cost up to Sh150,000. Takers, he said have to see him by appointment only. In January St Mary’s Boys Secondary School, a private school in Nyeri caused ripples in the country after suspending 10 boys for wearing tattoos. The debate that followed, however, had been on the appropriateness of tattoos but hardly on possible health consequences. “There is strong evidence for the transmission of hepatitis B and C viruses, syphilis and even HIV through tattooing,” says Dr Theresa Gyorkos of Montreal General Hospital, Canada, and an expert in blood infections. To stop, the young blood from going to the dogs, Awili prescribes safe sex and tattooing education for the youth accompanied by early HBV testing. The blood bank, the authors say must adopt stringent and non-compromising screening protocols including among adolescent donors to improve blood safety. The Ministry of Health has recently received Sh1 billion from the World Bank to increase the availability of safe blood.