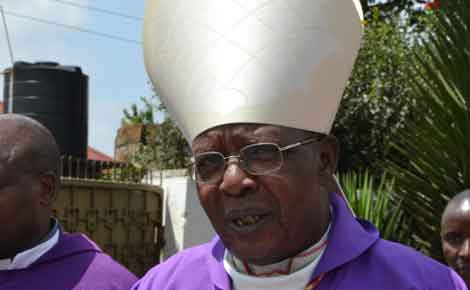 Earlier this year, John Cardinal Njue of the Catholic Church warned a congregation to be wary of the vaccines. [PHOTO: FILE]

NAIROBI, KENYA: Health Cabinet Secretary James Macharia has said the tetanus vaccination drive will be rolled out on Monday as planned, despite opposition from the Catholic Church.

The vaccination has in the past raised a storm, with the Catholic Church alleging it could be a contraceptive.

Catholic bishops in Bungoma opposed the drive that was to be rolled out in the county, terming it a contraceptive drive in disguise.

Speaking at a press conference, Bishop Paul Kariuki, who is the chair of the Catholic Health Commission of Kenya, asked whether there was a tetanus crisis in Kenya.

“If this is so, why has it not been declared? Why does the campaign target women aged between 14 and 49 years?” said Mr Kariuki.

Bishop Joseph Mbati said the campaign bore similarities with one that was conducted in the Philippines, Mexico and Nicaragua.

“The sanctity of life and the dignity of a human being must always be prioritised in health care. In the absence of proper and adequate information, the Catholic Church will not shy away from raising moral questions on matters affecting human life,” read the statement signed by Mr Kariuki.

The two called on Kenyans not to participate in the exercise until the Government came out clearly about the vaccination.

However, the Health CS said the campaign would be rolled out on Monday as planned. Mr Macharia said the ministry has had several meetings with the bishops and “we have explained the science behind targeting women”.

Macharia insisted it was clear there was no danger, adding this was not the first opposition to such drives. He said the polio campaign also faced opposition from some religious groups.

“To speed up the process of eliminating the disease, we have embarked on the current campaign targeting all women of reproductive age,” said Macharia.

The CS also said the ministry would issue a comprehensive statement on the matter soon.

Earlier this year, Catholic Church head John Cardinal Njue warned a congregation in Nyeri to be wary of the vaccines because there was “something fishy about them”.

“What is the rationale of a tetanus vaccine for women only?” Mr Njue asked.

Despite having not explained the reason for his opposition, Njue’s remarks raised concern that the vaccine could be family planning in disguise.

“Even the polio vaccine was faced with the same propaganda. The campaign against tetanus has been going on for some time. Why has the fear started now?” asked Dr Muthenji.

After facing condemnation from the Government, the Kenya Conference of Catholic Bishops (KCCB) came out in support of Njue’s views with a press release that raised pertinent questions on the exercise.

KCCB pointed out that the Catholic Church was a significant player in the health sector, with 54 hospitals, 83 health centres, 311 dispensaries and 17 medical training institutes offering preventive and curative services.

“The Catholic Church has not been engaged unlike other public health initiatives where we have been invited to participate as a key stakeholder,” read the statement.

KCCB also flagged the lack of adequate public awareness unlike other national health initiatives that are preceded by a public launch at which the public gets to ask questions.

The other question raised was why tetanus was prioritised despite there being other life-threatening diseases in Kenya.

KCCB stated the vaccine was laced with Beta human chorionic gonadotropin, which has been used in the Philippines, Mexico and Nicaragua to prevent women from future pregnancies.

“When injected as a vaccine to a non-pregnant woman, this Beta HCG sub-unit combined with tetanus toxoid develops antibodies against tetanus and HCG so that if a woman’s egg becomes fertilised, her own natural HCG will be destroyed, rendering her permanently infertile. In this situation, tetanus vaccination has been used as a birth control method,” read a statement by KCCB.

South Africa Covid variant: Health Ministry calls for enhanced surveillance
To personalise content, tailor ads and provide best user experience, we use cookies. By using our site, you agree to use our cookies.