A former addict who began taking crack and heroin aged just 15 and overdosed 19 times has revealed her incredible transformation.

Madison McManus, 28, was introduced to hard drugs as a teenager by her then boyfriend and was left homeless since she was 20.

She went through years of arrests and life on the streets before she decided to get clean.

Madison, from New Jersey, US, fell pregnant when she was 18 and was forced to give up her daughter because of her addiction, reports The Sun Online.

The mum-of-one is now back in touch with her family and fighting to win custody of her daughter, now nine.

With support from Alcoholics Anonymous, she beat her addiction and is now determined to share her story in the hope of helping others.

Madison said: "To anyone who is struggling, there is an answer. There is a solution to this disease.

"I lived a life full of misery and prayed every time that I slept to please not wake up.

"I thought for a long time that I would never get out of there. When I had enough, I found a new way of living.

"It is possible, there is help. Grab on and don't let go."

Madison said she experienced her first rehab at the tender age of 15 and would attend programmes on and off until the age of 18.

When she fell pregnant, she had nine months sober which was her longest stint until now.

Spending six years on the streets, Madison said she escaped situations she 'still doesn't have words for.'

But she hit rock bottom with her addiction when she dropped out of school and could not stop using.

She also signed away temporary custody of her daughter and had no family or friends in her life.

Madison told how she was trapped by her addiction until she was arrested and pushed to take back control.

She said: "The disease had me in its grips for six years, holding me captive.

"I held so much shame and regret for losing my daughter, losing my family, and losing myself."

Madison recalled the last time she used drugs in July 2018 which she described as her 'lowest point.'

She recalled sitting down and weeping into her hands as she cried 'God please get me out of here.'

Within two hours, she was arrested and later vowed to get her life back on track.

The brave ex-addict said drug court saved her life as she decided to kick her habit in prison and choose rehab instead.

It came after several previous arrests for shoplifting and drug possession.

Madison began a 30-day programme in South Jersey and continued to continue her treatment for four months at a halfway house.

When she moved into her own apartment, Madison found Alcoholics Anonymous and said this was 'when the real growth started.'

She added that the first milestone on her road to recovery was regaining ties with family.

Now she has the full support of her parents, sister and friends in her battle to win back her daughter.

Madison described her recovery as an everyday process and compared it to a 'maintenance job where I better myself and grow spiritually'.

She added: "‘I wouldn’t ask for anything else in my life besides keeping the positivity that I have and the hope I have to keep growing every day, and continuing to give it away to others.

"It was such an enlightening feeling to see that I was the problem and nothing would change until I changed me.

"I have an inner peace and tranquility today that cannot be put in words." 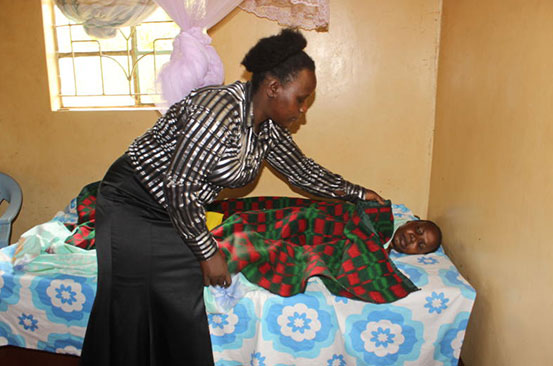 By AUDREY MASITSA | 1mo ago

Woman remains hopeful despite being bedridden for 32 years