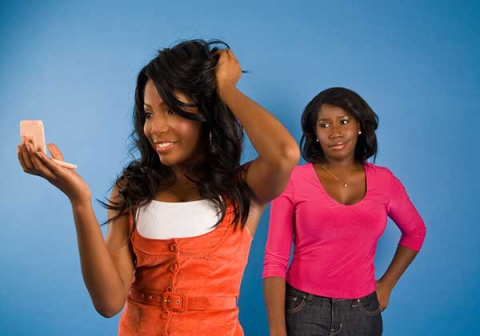 Have you ever had that one friend who is always in competition with you even though you are nowhere near competing with them? The kind of friend who always has a negative answer even when being given a compliment?

I have come to believe that such people are fighting personal battles, only that they drag us into the battle field yet we have no weapons. So I have decided to turn a deaf ear and a blind eye on them.

In their previous lives, before they reincarnated as human beings, I believe such people were hurricanes. The rate at which they destroy everything is extremely high. Sometimes I wish they were born avocados, maybe we would have already consumed them in our githeris.

Or better still, sandwiched them between slices of bread, crushed them using our premolars and molars and drunk hot water to completely dissolve them in the stomach. Such beings should never reincarnate.

I have this one friend who never wants to hear me talk positively about any promising suitor as if she would be the one to say 'I do' on my behalf on the D Day. As though she would gladly marry me if I decided to turn down all the tall, dark and handsome men on my trail. I am beginning to think she wants me to die single so that my body is sneaked into my father's compound through the fence as our tradition dictates.

The devil is a lair! I will get married in Jesus name! To her, every potential suitor hitting on me is wicked, reckless, ugly and above all stingy. Even the one time five years ago when I received flowers on Valentine's Day from my then crush, she was quick to say that the flowers looked like they had been snatched from a handsome man at gun point.

The first time I moved out of my sister's house to start living alone, she visited me in my bed sitter and said prison cells in the US were far much better than my house. That's the day I figured out I could be having an ex-convict in my circles of friends. I mean, who else knows the corners of a prison's cell better than someone who has called the cell home? I immediately dropped her as a friend, I did not want stray bullets racing past my humble ears in the wee hours of the night simply because she came for a sleep over.

Unfortunately, such friends never let go! Even in death, they will frequent your grave to remind your resting spirit that the wages of sin is death, as if they are immortal.

One time, we were both invited to a wedding by a mutual friend and during the reception when everybody else was shaking a leg and letting go of the week's stress, she was busy twisting her mouth like a cow expanding its nostrils to facilitate the exit of a fly from within. For a moment, I thought she was suffering a muscle pull somewhere between her eyes and her mouth.

How wrong I was! There she was venting about how the bride had dressed in a pure white gown yet she wasn't a virgin. You would think she was walking around with a digital 'virginometer' measuring the level of people's virginities during the wedding. For Pete's sake, whether the bride puts on Green, Pink, Maroon or Yellow is none of your business as an invited guest! Unless you got a personalized invite with such specifications.

Whenever I bought a phone, she would buy a better phone, if I went swimming in our neighbouring swimming pool, she would travel all the way to the Coast to swim in the ocean. I remember the day I delivered my baby, instead of sending me a congratulatory text like the rest she called to tell me "Sasa mimi wacha nitafute twins ndio nikuovertake".

The thunder that is supposed to strike such people is stick docking at the port with the yellow maize.