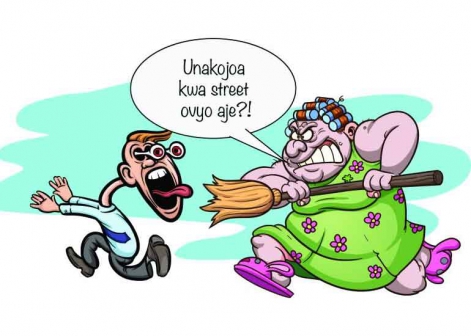 I don’t know if it’s a Kenyan habit or a ‘Homo sapiens’ thing, when you can’t help but notice nasty and disgusting things people do. Let’s start with the obvious; like peeing in full view of the public. Thank God these perverts are being taken care of by Nairobi County officers.

Even where it’s written usikojoe hapa you will still find someone doing it. Like seriously?
On the same subject, I don’t understand how people allow their small daughters to pee anywhere just because they are young. Ever heard of paedophiles and perverts, let alone the fact that it is not a pretty sight seeing a young girl with her pants down doing her thing then putting them back on without wiping?

Then there are those manner less dimwits who spit right in front of you, making this horrible, monster-like sound before letting out a huge splatter of phlegm and then acting like nothing happened.

But I guess it doesn’t get as bad as women who remove ‘lunch’ right in front of you. A grown woman removing her underwear from her b***-crack as she tries to squeeze her fingers through her tight outfit is beyond me and just not lady-like.

On the same boat are men who publicly go for their man-hood area and grab it, feeling almost triumphant. No, I am not talking about the crazy Michael Jackson type of thing but that dirty, itchy must-scratch kind of grab.

Then there are those people who have the audacity to smoke in the matatu with no regard for non-smokers and children.

While still in the stuffy confines of the matatu, let’s take a moment and remember how matatu rides can become unbearable when passengers seated on opposite ends play catch up without any consideration for your presence by shouting, showering you with their saliva and occasionally hitting you. I also don’t understand how people, more so women, take the lids off their BIC pens and use them to scratch their ears and remove the wax.

What’s worse is when they grab your pen, service their ears and then return it unapologetically. More use of the pen comes when they need to dig deep inside their weaves while making a strange face from the relief and endorphin rush.

For those without a pen at hand, long nails will do.
For those who choose not to use tissue or handkerchiefs, their fingers come in handy to dig deep inside their noses and then look at the mucus they removed, as if in awe of how their noses can produce waste. When it comes to eating habits, by now you would think everyone knows the use of toothpicks. Removing meat from your molars with your hands is such a turn off and disgusting. You would also think by now adults understand that you shouldn’t talk with your mouth full, but no.

Or that you never serve a main course and dessert together on the same plate. Heaps of it like you can eat for tomorrow. And if you’re one of those people who like to chew please do it with some refinement. No one needs to know you can afford Orbit. And please, don’t just throw it where it can stick to someone’s shoes or on someone’s furniture.
[email protected]

Five ways to love yourself
Lady Speak - By Audrey Masitsa