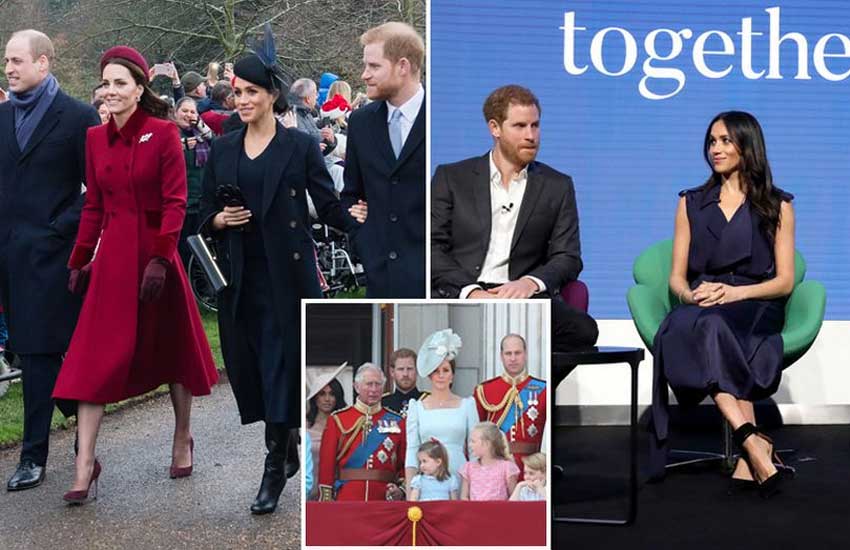 They were once dubbed the 'Fab Four' - but now Prince Harry and Meghan Markle are going their separate ways from Kate Middleton and Prince William in regards to their charity work.

The Duke and Duchess of Sussex confirmed this afternoon they are leaving the Royal Foundation charity and setting up their own.

William and Kate will remain with the original charity, which will be renamed the Royal Foundation of the Duke and Duchess of Cambridge later this year.

It comes amid reports of a growing rift - and body language expert Judi James believes the signs the foursome 'wasn't going to work' were there all along.

The split was announced a day after William and Harry met with trustees to finalise the arrangements. The foundation said the move was taken to "better align" the couples' charitable activities.

There had been rumours for weeks that the Royal Foundation would be divided after Harry and Meghan moved to Frogmore Cottage in Windsor and split their household from Will and Kate earlier this year.

Brothers William and Harry established the Royal Foundation in 2009 and later welcomed Kate in 2011 after the future king proposed to her.

Meghan, who is currently on maternity leave, joined the charity after she and Harry announced their engagement in late 2017.

Author and body language expert Judi James tells Mirror Online about the subtle signs that suggested a divide was on the cards...

It was relatively easy to see this foursome wasn’t going to work out as a team when they first launched on stage.

Meghan might have been the newbie team member but when it was her turn to speak her pace, energy and her keenness to establish the fact that she had experience in this kind of work - and therefore value to the team - was both unexpected and rather pleasantly stunning.

She was eloquent and confident and sounded very much like someone keen to hit the ground running, making as much change as possible in a short space of time.

While the others referred to scribbling notes and ideas down on the back of a fag packet Meghan sounded organised and passionate - and more like a woman who uses wall charts and forward planners.

Kate had always been a rather unconfident speaker and it was probably expected that Meghan would start in a similar way and build up her confidence as a royal slowly and gradually.

But there was a distinct air of leap-frogging about the dynamic as though Meghan had arrived fully-formed and raring to go.

Then there was that memorable moment when the ‘team’ were asked if there had been conflicts and William immediately let out that ‘Oh yeah’ reply that was almost a groan.

Kate and Meghan laughed knowingly, with Meghan allowing her hair to form a cut-off to hide her facial expression.

She even touched Harry in the way you often do when you’re trying to make light of any arguments or rifts.

Anyone in a business situation would have spotted the lack of team potential among them from the outset.