The former presidential aspirant termed the practice of parents demanding dowry for their daughters from their in laws as dehumanizing women.

As he met relatives of President Ramaphosa who had accompanied their son Andile Ramaphosa to deliver his marriage proposal over the weekend, Mr Mbabazi observed that the resources parents inject in the upbringing of their children is invaluable and cannot be equated to animals.

“Even the so called giveaway ceremony is distorted. We are not giving away our daughter. She is still our own, so whatever you’re going to give us, we are giving it to the young family so that they can multiply it to raise their family,” Mr Mbabazi told his in laws. 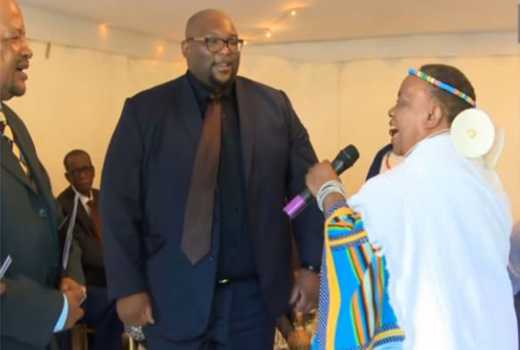 “This is prehistoric form of injustice which we must address. We should instead be cementing the bond between the two families and growing the roots of the family trees. We are not giving away our daughter because she is still one of us,” he added.

According to reports, the Ramaphosas’ were expected to pay dowry of 100 cows among other gifts. However, in a sharp contrast, the two delegations agreed on five cows that will be given to Andile and his wife to be. Another five Boer goats will be given to the aunties and uncles of Bridget as a token of appreciation.

The groom was also fined one goat by Bridget’s family for impregnating her before they go married.

37-year-old Bridget was raised by Mr. Mbabazi after her father died in 1983. She holds a post-graduate degree in Business Administration from Beijing University of Science and Technology. She also holds a Bachelor of Science in Environmental Engineering from Beijing Jiatong University.

Bridget met her soulmate Andile in China during their campus days.