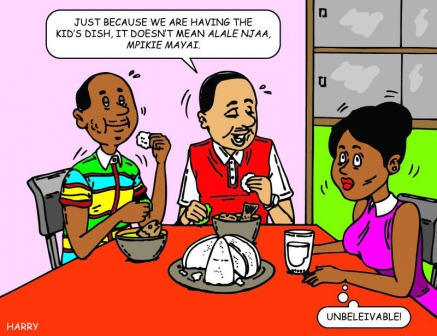 This goes out to all you men and women who make impromptu visits to people's homes claiming you were just 'passing by' or 'saying hi'.

Fine, I live by the road and you walk past my house everyday to catch a bus to and from wherever. That does not give you a licence to 'check in' every time you are passing by. For heaven's sake you are stretching people's budgets.

By the way, if you ever fall victim of such visitors, never gamble with the question "Utakula ama uko sawa" because they will never say 'wako sawa'. So next time before you risk asking such a question to an announced visitor, ensure there is enough portion to feed an extra mouth or better still extra mouths because as fate would have it, their appetites are always up there on the topmost floor of the tallest building in the world.

These visitors always seem to know when you have prepared your best meal because apparently, they never show up the day you have decided to fast and talk to your God. These visitors will be the end of those who live next to the roads where they can be accessed easily.

Don't call me mean but I will always live very far from the road. In fact, far from the point where you alight from a matatu and spend a dime on a motorbike such that anytime you think about visiting me, you will be forced to arrange that visit with me. Otherwise, if you try to surprise me, you might as well be the one getting surprised after covering all the kilometres in vain.

For instance, we all know the price of fish in this city in the sun. I live with four dependants in my one roomed 'massionette' in Komayole. I earn peanuts from my employer down at industrial area and I have to pay my house manager because my husband is a casual labourer who gambles with the little he gets and in most cases loses all his bets! I swear one day I will storm the Sportpesa offices and strip naked in protest! .......and to you men who know nothing about football, stay away from betting!

Anyway, I was talking about my peanuts and how I manage it.
On this day, I sacrificed plaiting Ghanaian lines on my big head and instead, passed by 'Mama mboga's' kiosk but this time, to buy fish. Fish that I had wished for all through the month. I chose one large fish that cost almost twice my Ghanaian lines, at some point, I almost told mama mboga 'wacha tu'.

But I thought of my daughter and how much she loves fish, I was going to do this for her. So I asked mama mboga to cut the fish in four pieces. You can imagine the size of the pieces....smh...tiny but who cares, after all, I was going to ensure it had a lot of soup that would match the big size of the ugali I had planned to make.

By the time I was getting into my house, my daughter was already sleepy. I decided to let her catch some sleep as I prepared the meal then wake her up to eat once I was through. I quickly finished cooking and set the table, then I asked my house manager to eat together with me then wake my daughter to eat after us because my daughter eats forever and I was too tired to feed her before eating.

Just then, this impromptu visitor knocks on my door accompanied by another one claiming they were just 'passing by'. With the food neatly laid on the table, I could see their smiles becoming wider by the minute. My house manager and I had just finished eating.

Let's just say by the time they left, there was nothing left on the table except for bones! I was left there with a screaming daughter who had woken up asking for fish she had seen and it was nowhere. One of the impromptu visitors shamelessly suggested "Si umnunulie mayai awache kulia". If you are one of such impromptu visitors, just know the people supposed to crucify you are still in consultation with Pontius Pilate.