How does she do it? The real life Wonder Woman in Dr. Elizabeth Wala

Dr. Elizabeth Amakove Wala is one of those women whose lives make others stop and wonder how she does it. She is a career achiever, a single mother of four, a chairperson, a rabbit breeder, a scientist, a cyclist, and she can still tell you which restaurant in town is good for kids and why...She speaks to PETER ODUOR

A few weeks ago, Dr Elizabeth Amakove Wala took her 8-year-old son, and her triplet daughters and her brother’s child and drove from her Nairobi home to Maasai Mara for a weekend outing. Taxi drivers don’t like to make that journey because it is tedious and tiresome.

Regular drivers rarely make that journey because they fear it more than taxi drivers, but not Dr Amakove. She did it, wonder woman style. Says it nearly ‘killed’ them, but they came back in good form although perhaps more tired than a war dog. This is her style: Taking on one challenge after the other and executing it with little fanfare.

Amakove is an overachiever. Aged 38, raising four children (three of whom are triplets) as a single mother and yet still somehow maintaining one top career after another, if her achievements were to be pinned on her chest, they could roll all the way down to her stomach or cover here entire chest.

She is the current Regional Manager Medical Services and Outreach Programme at AMREF, the former CEO Kenya Medical Association, she is a rabbit breeder, she runs an association for families who have multiples (twins, triplets or quadruples) with over 700 families, she runs a nanny bureau (with her nanny), she cycles, she writes, and she does mentorship and speaking engagements. She was a Top 40 Under 40 2016 finalist and on top of it all, she has been a single mother for two years now. It is as though her day has 54 hours.

“It is because of my personality. That is the reason I can do so many things. And also it has a lot to do with how I was brought up. I grew up in a simple family. My parents are teachers. I was born in Mombasa but raised in Kitale, the seventh born out of eight children. And from when we were young, we were taught that age, gender and physical limitations like size should not and must not be barriers to achieving what we wanted. Our parents taught us that there was never an ‘I can’t do it’ situation. They taught us to go for what we wanted,” she says.

She took a Myers Brigg personality test once, ‘to understand herself better’. When she was done, she was declared type ENFP; a campaigner. And a compulsive doer - who seeks a challenge and gets restless - seeks another the moment the challenge is taken care of. Her schooling is as normal as they come; regular primary school, Alliance Girls for her high school then University of Nairobi School of Medicine for her degree.

“My parents had this thing of you have to be two units a head of your teachers. It is how I studied. They also taught me to not see myself as a woman. I learnt to do just about anything that I wanted. After medical school, I practiced in the public health system for six months and it was a disappointment, totally not what I was looking forward to,” she says.

Dr Wala works on challenges and when the challenge does not exist anymore, she moves on or makes it more challenging. And right now, working with AMREF, she is in charge of programmes that span seven countries. It all may look like a disorderly path, but she believes that there is order in her disorder.

At home, she is bringing up her children like a ninja. She does not shield them from much like you’d expect an urban mother to do. She wants her children to learn how to do things on their own, she wants them to know that they can do anything and everything that they want.

“Your upbringing defines how you raise your children, and for me, I was taught that we are all equal; men and women. And that we all have equal chances. I don’t have gender roles for my children. In fact, I realise that women get empowered while the men stay stuck. So, for my children, I want them to all learn how to cook or how to set the table or how to swim. I would want my children to survive in this world without me. They should be able to go to town in a matatu on their own if it calls for it,” she says.

She admits that she is the kind of a parent who would rather let the children explore for themselves and find out what they want and what makes them happy instead of telling them what to do and what to make of themselves.

“I want them to explore and to know themselves and to know for themselves what works for each. I want my children to explore their abilities according to their personalities. But they have to possess life skills. That I insist on. They have to learn how to swim, how to cook, how to clean, how to defend themselves...? As for my son, I am trying to get a male figure in his life because of my separation from their father,” she says. 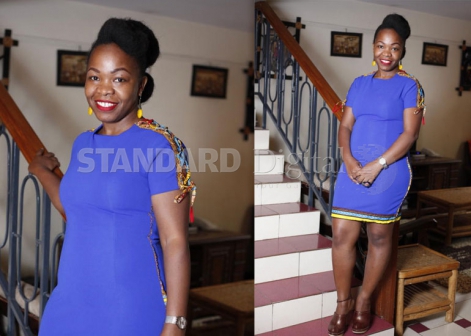 She tries to keep her children grounded in reality. The kids eat home cooked food, they have a routine that they have to follow and they have their own set of household chores. When she got the triplets, it was hard, but her friends and family stood by her. Her friends took care of her... gifting her with baby clothes and diapers and other baby stuff so much, that there are things she never purchased until one year after the girls were born.

How does she do it? Raise triplets (girls who are currently 6 years old), achieve so much and run so many things and still keep a sane mind?

She learnt two tricks earlier on: Compartmentalise and keep to a routine. She shares her experience. “The first trick that I learnt was to train my children into a routine. We (the house manager and I) plan our lives around the kid’s routine. This has helped a great deal. When they wake up, when they eat, when take a bath, when they go to school, when to get them from school, what to do during the weekends or on holidays, it all comes down to a routine that we work around,” she says.

As for compartmentalisation, once she leaves home for work, she only focuses on work, she never really called home to find out how they are doing back when they were young, and now that they are in school it even much easier. She doesn’t work at home or bring assignment spillovers to the house in the evening. If she wants to write (she runs a blog where she posts her experiences as a mother and reviews the places she visits like restaurants or hotels or parks with her kids and sometimes without them), she does so after 11pm or early in the morning at 3am. Fridays is her night out with her girlfriends - they go dancing. Weekends are for social activities (Saturday is for her rabbit farm while Sunday is church and the kids). Her nannies leave on Saturday afternoon so she can be with the children. If she has a speaking engagement, or if she is traveling, she takes the kids along.

Her life looks congested and most people would find it tiring. But not her.

“My energy comes from outside. When I am tired I go out to replenish it. I interact with people, I go dancing or get into a group activity or personal engagement. Look, when I did the personality test, I discovered who I am and stopped apologising for who I am and for the things I do or for the way I live my life. I don’t brag about my accolades, but I think I deserve it and my life may be too fast-paced for some people but I can handle it pretty well and with ease,” she says.

For a woman who wakes up at about 5.30 am every day, she sure does get many things done in 24 hours.