All eyes on GOtv Shield 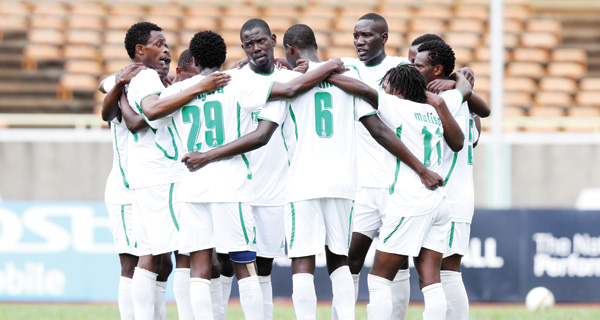 Gor Mahia during a past match PHOTOS: STAFFORD ONDEGO and BONIFACE OKENDO/STANDARD

KPL leaders Gor Mahia face Thika United at Nairobi City Stadium on Sunday in top-of-the-table GOtv Shield match as AFC Leopards hope to revenge against Chemelil Sugar when the two sides battle it out at Afraha Stadium on Saturday.

The sugar millers maintained a 10-year unbeaten run against Leopards in all competitions by stopping them 3-1 in last Saturday’s KPL fixture in Mumias. It is a result that initiated a chain reaction at Leopards that led to the dismissal of former coach Luc Eymael and his entire technical bench.

This has paved the way for new man James Nandwa to take charge with his first assignment being to end his team’s humiliation at the hands of Chemelil.

“This is a hot seat no doubt but it was for that reason that I took it up. I love the challenge and are ready for it. We are determined to do well in both the KPL and the GOtv shield with the focus being to stop Chemelil and end their dominance,” Nandwa said when he took over at Leopards on Wednesday.

Nandwa’s biggest challenge will be on how to fill a defensive gap that has been left by the departure of Jonas Nahimana.

Nahimana’s absence was felt against Chemelil, but the presence of Anthony Kimani, who has recovered from injury should help at the back.

The three men who destroyed Leopards last weekend Victor Omondi, Tony Opondo and Jonathan Mwaniki will be keen to do it again today.

The Gor-Thika United match is the biggest this weekend as both teams are eying a quarter-final place.

Gor have always dominated their fixtures against Thika United and they go into tomorrow’s match inspired by a desire to continue with their winning ways against their opponents.

This realisation gives tomorrow’s fixture added significance and coach Bobby Williamson is expected to field his best side.

Having lost out on the KPL Top eight tournament and with the league title out of sight, Thika United will also come out strongly aware that this could be their only trophy this season.