In an ever-evolving world, lasses holds as much power as the alpha male despite the fact that a majority aren’t keen to flaunt this influence. The ‘foxes’ are still as cunning as always and in pursuit of what defines their femininity, they are now taking the lead in demanding for what is rightfully theirs. These are some of the lines girls will use to knock you off your guard:

She probably bought a new television set and needs someone to set it up. Instead of calling the cable company’s customer service, she takes advantage and invites you over. Girls do love a man who is handy. Needless to say she checks you out through the entire process soliloquizing on ways to get you to stay longer. Once you are done fixing the cable, she’ll ask you to watch a movie or even allow you to catch the game at her house - anything to keep you around. Before you know it its midnight and the bed has been spread for you.

2.”I don’t know what to do with all this wine and hard liquor in my house. Come help me finish it.”

She could have called her girlfriends over to gossip about boys, sponsors or shoes but no, she chose you. Not to mention that earlier in the day, she carefully picked out a bottle of wine that appeases your taste buds or even your favourite whisky bottle. Once there, you’ll find her already on her second glass, clad in her shortest of miniskirts or booty shorts or even that little ‘nightie’ ready to ‘catch up’. One glass quickly turns to five and you see things ‘clearer’ now through her craving eyes. You have been trapped.

As corny as this line is, it actually does work...or so I’ve been told. They probably borrowed this line from their ‘mafisi’ counterparts...

No one wants to look like an embarrassment by falling off a crooked chair so you oblige and sit on the bed. Being a bedsitter, there’s no option but to watch that one movie she picked out with sexual scenes on her bed. Need I say more?

Ladies love the thought of a man in the kitchen but men adore a lady who won’t hesitate to pick up that knife and whip up something sumptuous for them. She knows that the quickest way to a man’s heart is through the stomach so again, she’ll use that to her advantage. All the while she’ll make sure she has something tight on and will keep bending to get your attention. After the meal she’ll give a lame excuse on why she can’t go home like: “I don’t feel safe going home alone I could get mugged you know”. At this point, it would only be in order for you to say: “Let the games begin!” Sorry, it was her idea, you just fell for it.

Yes! As cliché as it sounds, the lasses use this line with the intention of letting you know exactly what it is that they want. That is when you remember that Uber app on your phone would come in handy, lest she changes her mind. Avoiding looking desperate, like simply being a man, you tell her you will first have to check your schedule but at the back of your mind you know it’s already a ‘yes.’ It’s a chill night..... You have been trapped.

She takes a plunge into the unknown and asks you this question. Not sure of how you’ll respond, she starts telling you of how she hates uptight men who can’t ‘loosen up’ and have a good time once in a while. She says she once dated a guy who was too serious with life and expresses her dire admiration for the ‘bad boy’ and tells you look like one. All this while, she’s running her fingers through her hair. And the heat is on, on you.

By the time she’s saying this she already sent you a text that seemed to be addressed to one of her girlfriend’s. 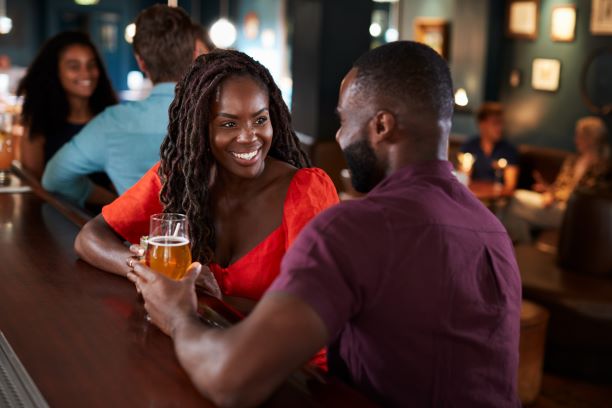