By Isaac Swila | 4 years ago 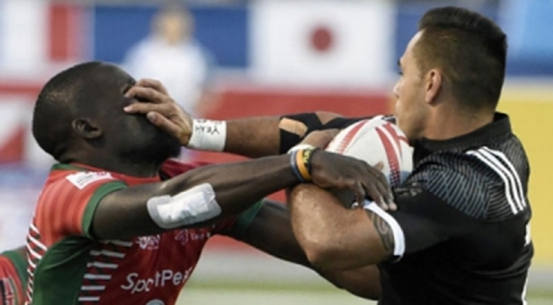 In a video that has surfaced online, “Big Vic”, otherwise known as the “Lion of Muthurwa” according to his Eastlands admirers, is seen dressed in a skinny blue jeans and black top addressing his compatriots in sheng at a London hotel.

He goes ahead to rally them to do well in the games and assures them of his support.

“Walikuwa wananipashanga that ikifika kwa mambo ya ball sisi (Kenya) hatuko. Mimi nina wawish well and nahope mtaduwell (My team mates kept mocking me that when it comes to matters football we are non-existent and I hope you guys will do well).”

Upon dropping the gauntlet that he will be wiring a small token, the roam comes to life with roaring laughter and applause from the Rugby players who continue to applaud him at the end of his speech. The video so far has attracted over 40,000 views online.

It however seems that Wanyama’s clarion call didn’t help much as Shujaa had a disastrous outing losing 0-47 to the Mike Friday coached USA , after they had gone down 10-12 to South Africa.