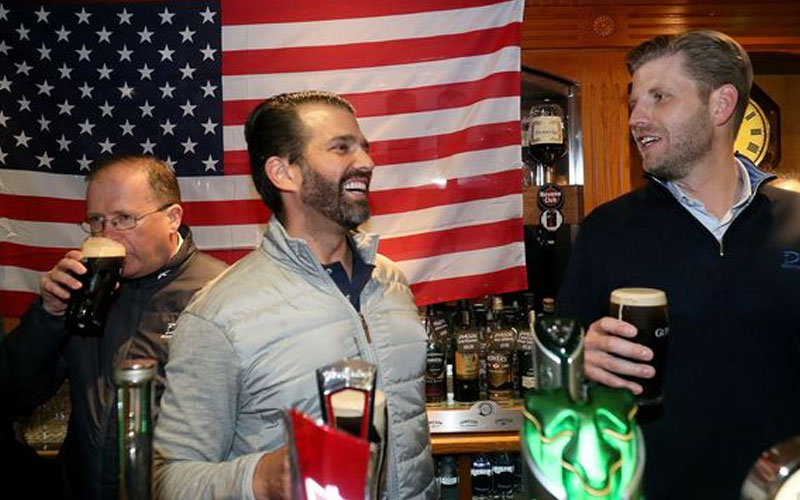 Two of Donald Trump's sons went on a mini-pub crawl in an Irish village - and even poured a few pints of Guinness.

The pair had a go at pouring pints of Guinness and posed for selfies with children outside the pubs. 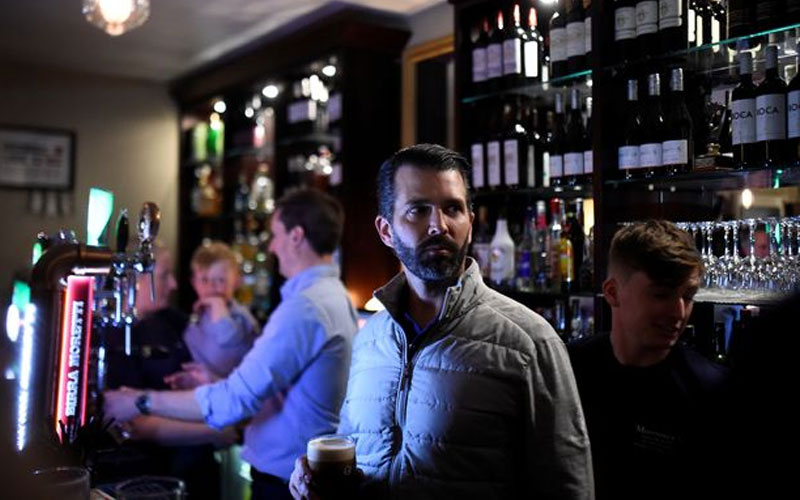 Their dad arrived in Doonbeg earlier today, after holding talks with the Irish Taoiseach Leo Varadkar, and is expected to stay at his golf resort in the village tonight.

The pair offered to buy everyone a drink and encouraged the crowds to cheer for his family. 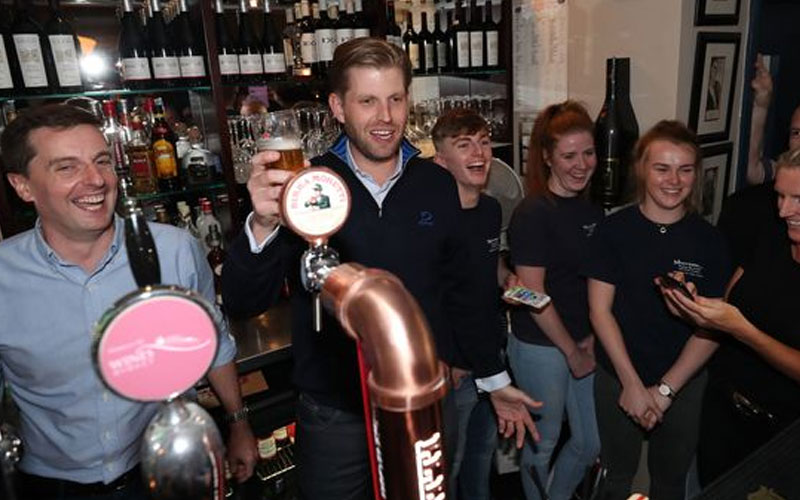 "So let me ask a question. Does Doonbeg love Trump?," Eric asked locals.

He was met with a huge chorus of "yes".

Eric added: "And we love this place more than anything. So thank you guys for the hospitality. It's awesome."

At one point, a priest presented the brothers with a landscape photograph.

The brothers stayed to listen to some traditional Irish music in one of the pubs.

At one point, a reporter asked Eric did he support his father's policy on climate change. 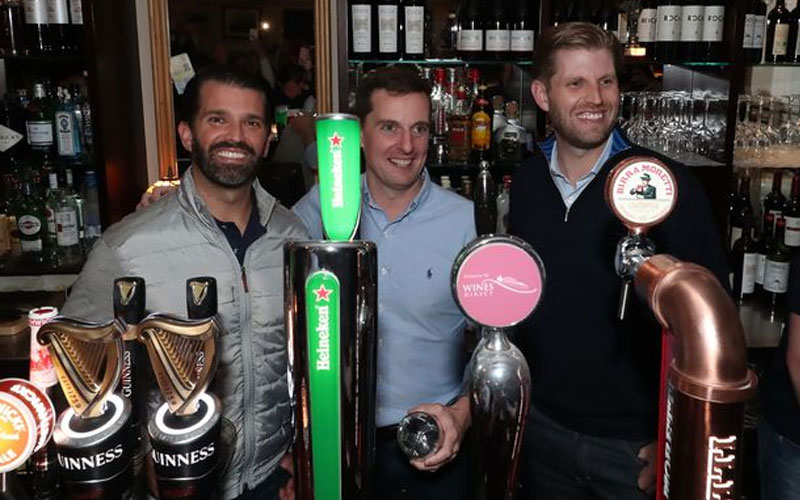 "I'm not here to talk politics. We get a lot of love in Doonbeg, I don't see many people protesting here," he replied.

He turned to the crowds and asked "are you guys protesting?", prompting cries of "no" in response.

Shortly after Mr Trump and his wife Melania touched down at the Doonbeg golf resort, the village erupted into a carnivalesque celebration with ceili music and Irish dancers taking over the main street.

A number of young men could be seen with the American flag draped over their shoulders while American and Irish flags were erected side by side on lampposts to ensure the president was made to feel welcome.

Paul Markham, who lives in nearby Kilmurry McMahon, is a huge Trump supporter.

He enlisted the help of a few neighbours to make an American-inspired top hat, which he hopes will catch the attention of Mr Trump if he visits the village. 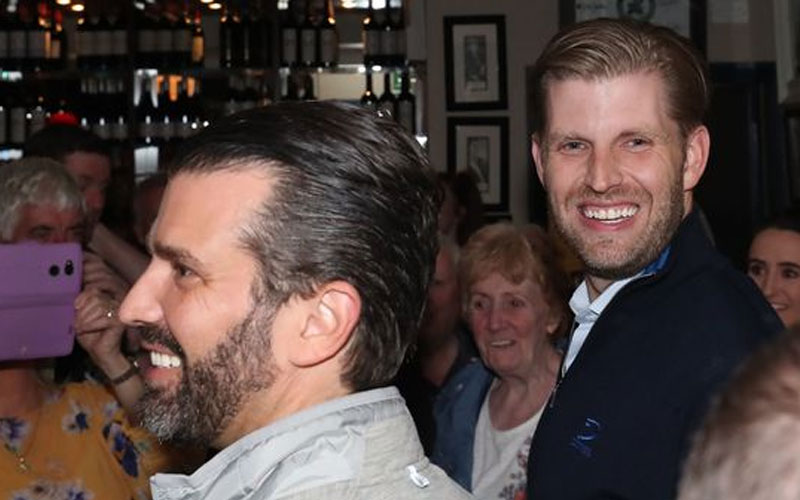 Speaking in Doonbeg, he said: "I think it's a great cead mile failte (Irish welcome) for him to Ireland and to this historic village.

"The atmosphere is building up and we are all here to welcome the Trump family, it's a great occasion.

"We are hoping Donald will come down from his hotel and into the village.

"People are waiting anxiously waiting to greet him. He'll get a great welcome."

Michael Leahy travelled the short distance from Kilrush to welcome the American president. 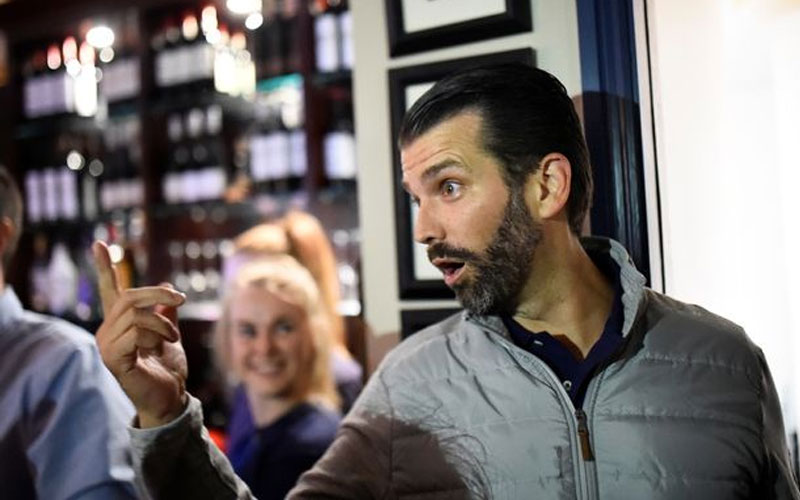 Wearing the Make America Great Again cap, he said: "It's such a wonderful thing to have such a significant historical figure coming to this parish.

"I think he's of great significance from a point of view of world peace. He's a very peace-making president."

However, as common with most of his visits, the controversial figure attracts protesters.

Cork man John Lennon travelled to Doonbeg to express his opposition to the president.

He accused Mr Trump of having "no respect for women". 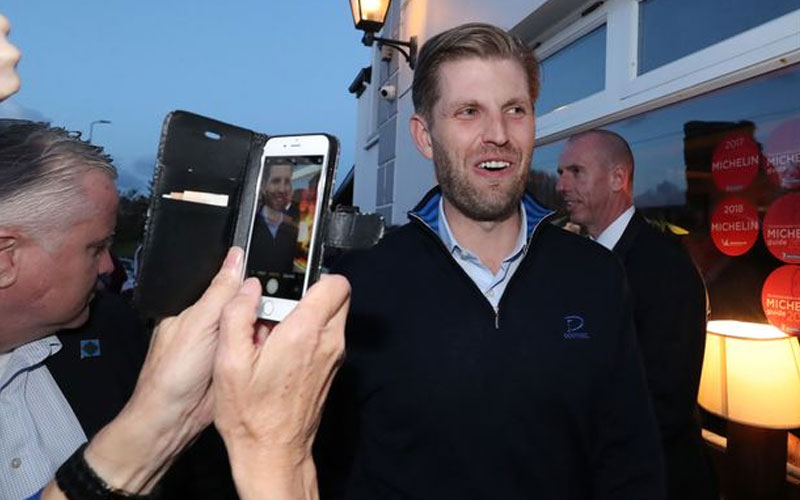 He said: "I am ashamed that the Taoiseach (Leo Varadkar) was at Shannon airport meeting him, a man who has no respect for the truth.

"There are two homes in Ireland for foreign people to be entertained, Leinster House or Aras an Uachtarain (presidential home).

"I am embarrassed for the people of Ireland.

"Trump is a scumbag."

US veterans Ken Mayers 82, and Tarak Kauff, 77 were also there to protest against the visit.

Ken, a former US Marine Corps Major, said: "Donald Trump represents the murder that the United States is creating all over the world.

"Unfortunately the Irish government is complicit because they are not enforcing their neutrality.

"Three million US soldiers have passed through Shannon Airport since 2003 on their way to wars in the Middle East and North Africa."