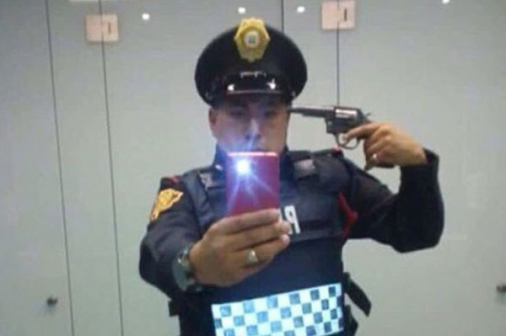 A snap happy cop who took a selfie in uniform holding a service pistol to his own head has been suspended.

The Mexican police officer said the shocking photo was for "personal use", a tribunal heard.

The image shows the officer in full uniform including his hat and bulletproof vest, with his phone in one hand taking the selfie whilst the other holds his gun, the end of which rests against his temple.

The officer's name and workplace was not revealed in reports, but he was identified as a member of the Secretariat of Public Security (SSP).

The photo was shared on social media, where it was widely commented on by amused Twitter users.

Twitter user @LupitaJuarez posted on the social media platform saying: "I suspect a short career. Internal Affairs will follow it up."

According to sources, the officer had to present himself at the town council with a statement explaining his actions, after which he was suspended pending a further enquiry.

Once the enquiry is complete, it is thought the man will either be sacked or reinstated.