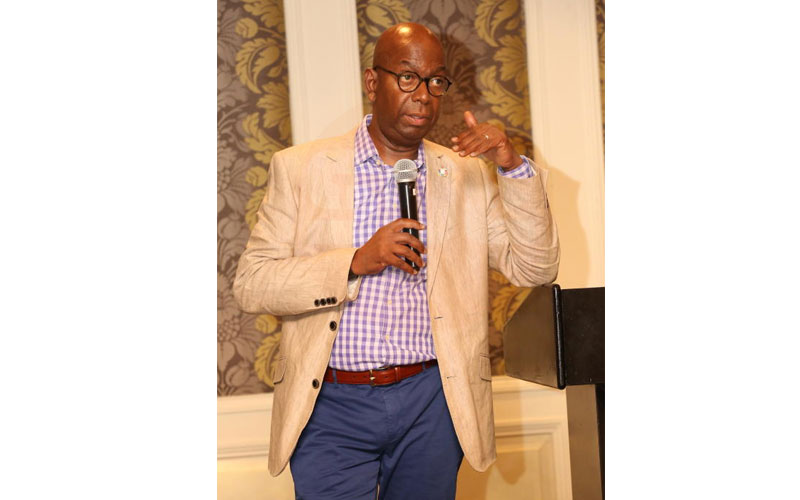 Robert 'Bob' Collymore may not have a college education but he is at the helm of Safaricom, a company that is arguably one of Africa's finest and a trend setter in the world of communications.

There tends to be a lot of reliance on paper qualification. We stuff ourselves into universities, then we come out and there is very little difference between us and all the other people who also did the same.

In this industry and many others, if you are not a learning treadmill, you will be left behind very rapidly. The advances that we are seeing in technology such as in artificial intelligence, robotics - I do not have to go to school to learn about it.

I can learn about it because the resources are there. I can buy a book on Amazon in two clicks.

So get into continuous learning instead of relying on the old things you learnt in university – things have moved on.

I have done many different types of jobs but I never anticipated that I would become the CEO of a mobile phone company in Africa.

Just because you went to university and studied law doesn't mean you become a lawyer.

READ ALSO: Michael Joseph on his four marriages, starting Safaricom in an apartment and why he doesn’t like wearing suits

You need to go into the world knowing that what you learnt in the university was how to learn. You must be adaptive.

3. There is no shortcut

Millennials believe that once you get employed, it will take you a matter of weeks before you get the corner office and get the land cruiser.

We forget that in all ages, especially in this one, everything takes time. Whether you want to become a basketball player or a CEO, you have to put the hours in.

You do not become a good photographer if you do not do 20,000 hours behind that camera. Shortcuts tend to lead people to a lot of problems, often legal problems.

My earnings are not a secret to Kenyans, but you can see that I am not hugely wealthy, compared to other people.

But do I consider myself a failure? Of course not. I do not want to find a shortcut to riches because they are not the goal. Unfortunately, a lot of people think there is a shortcut to it. You have to work hard.

Grab opportunities. Opportunities sometimes present themselves only once and you have to grab them.

Luck also has a big role to play, so again, don't sniff at luck. When luck presents itself, just take it. When you get a good fortune, just take it.

5. Learn the art of gratitude

We tend not to be grateful these days. Be grateful for what you have. If you wrote down the things that you are grateful for, you would be amazed.

Grateful people are much more agreeable than people who grow up thinking about how they did not get a break.

If I look at my own background, coming from a broken family, a single mother, being the only black kid in the school that I went to in the UK, not going to university - there is a whole lot of things that I can stack up and say are all the reasons I should not be doing the job I am today.

If I had let them hold me back, I would still be working in a shop like I used to.

6. Lose the sense of entitlement

I never had the sense that I could not work in the shops because I had completed my A-levels. I was a delivery chap delivering furniture, I used to stack shelves – I never imagined I was too good for any job.

I did a lot of things and I said, "It's a job. I will do it and I will take my lessons from each and every one of those jobs."

If you look at how I engage with people working in shops when I go shopping, my interaction with them is shaped by that experience because I walked in those shoes. I worked behind that checkout. I know how dehumanising people can treat you sometimes.

I hold those people with huge admiration and respect. Don't have a sense of entitlement. You are never too good for anything.

You are never too good to sweep floors and all. That is the thing about opportunities. They may not present themselves as you expect them to.

7. Move with the times

That is a huge number. Even here in Kenya, I estimate that we need to create about 3,000 jobs a day.

That's a scary thought and it is because that's how fast the population is growing.

Foxconn, the people who make the iPhone, reduced their workforce by half because of robotics.

In Africa, we have a narrow opportunity to take some of the manufacturing from China, but that opportunity is not going to be there for long. We should be grabbing those opportunities now.

What we are seeing is that the people grabbing those opportunities are from places like Vietnam, so if we do not grab them now, by the time we come around we will be out of the game.

8. Are your skills important in today's world?

Get to the front of the curve. Read. I always tell my team, "I mustn't know more about stuff than you. You have to be smarter than me.

If you aren't smarter than me, then why would I need to hire you?" You need to stay ahead of the curve and there is no excuse for not doing it because everything is online these days. You need to ensure that you are skilled to do the jobs that exist today.

If you ask how many people getting out of the university today are familiar with things like artificial intelligence and data analytical skills, they are very few. Many of them write letters to me asking me to give them a job since they have a Bachelor's Degree in communication. I do not need that.

However, if you have data analytical skills, I will hire you today. Young people, therefore, need to move away from the trend of wanting to have a BCom degree or becoming a lawyer. With the 4th industrial revolution, it is not just blue collar jobs that will disappear. Many white collar jobs will also disappear.

You are not going to need lawyers to do everything they do today. A lot of it is very laborious and you can get a machine to do it. The same goes for investment analysts. You will get a machine that can trade much faster than human beings can trade. A machine can trade 24 hours a day and can trade by the second.

9. Study what the market needs

Young people need to become familiar with the challenges that the world is facing and the opportunities that are there.

The biggest mistake we make is that we have what I call the 'Kiosk Mentality'. So if I am a hawker and I am selling oranges and the neighbouring hawker is selling bananas and she sells more bananas today, guess what I am going to do tomorrow?

READ ALSO: Bob Collymore: It pays to have more women at the top

I will sell bananas! You see that mentality even in the construction of shopping malls. I have been here for about seven years and suddenly there is a shopping mall everywhere, but now there are empty shopping malls everywhere.

Go and create your own space. Don't just copy what someone else does. Study what the market needs.

I spend a lot of time with young investors. Sometimes I will be in London or New York and someone stops me and tells me about their start up in Kenya. What is disappointing is that these people often come from San Fransisco and Silicon Valley.

They came to Kenya, looked at the problem and thought of a way to solve it. The biggest example is probably M-Kopa. It was started by a Canadian, Jesse Moore, and Nick Hughes, a Briton.

They looked at simple problems, sat in my office one day years ago and said that the problem was that people do not have access to grid electricity and they thought they could fix that problem. So they did, by making M-Kopa solar.

Young people need to be doing that. Don't go and make another M-Kopa solar, because it has already been made. It's like Jack Ma says - China is not going to have another Jack Ma because they already have one.

They don't need anymore. Go redefine the market and fix those problems. It's not about being smart – it's about being relevant. Go fix the problem. Problems are everywhere. Look at them and think, "How do I tackle that problem?" not "How do I copy what he did?"

If you are 100 per cent perfect, then you are not trying hard enough. You are not doing enough things.

My predecessor, Michael Joseph, once said to me, "Look, just make decisions. If 60 percent of your decisions are right, then you will probably be doing better than me." And he was right.

We make a lot of wrong decisions, but it means we are trying. A little under 1 out of 2 of your decisions will be wrong and that is OK because it means you are trying new things.

12. Read and read some more

This speaks to continuously learning. I probably get through two or three books in a month, to try and keep myself ahead of the curve. If I am not travelling a lot, then I read more.

I tend to read two or three books at the same time so that if I get bored with one, I can pick up the other.

However, if I could recommend books it would be Sapiens by Yuval Noah Harari and Reclaiming Conversation by Sherry Turkle.