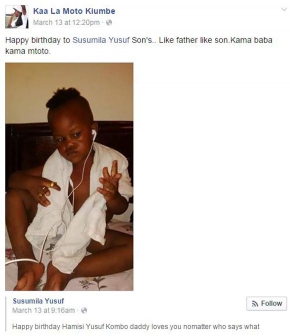 Forget the “baby daddy” issues that Coast based hit maker Susumila was entangled in. A while back, he was in a tussle for child custody with his baby mama, but they seem to have come to a compromise. This time round, he could not let that spoil his son’s biggest day as he took to social media to make sure the son and the world at large knows that their son- daddy bond is one he treasures highly.

Susumila flooded his Facebook with the pictures of his celebrity son followed by a number of love-filled captions just to mention but a few things he did for him that particular day.

The ‘Mapepe’ hit maker attested to the fact that some of the songs released that year, including Kidekide and Tuliza Nyavu made him a lot of cash that streamed in from shows, promos and other avenues.

It goes without saying that a sane parent would do anything for their children when they hit jackpot and that is exactly what the Mombasa star did over the weekend as he celebrated his son’s birthday in style.

Susumila - I Hate Chikuzee With A Passion