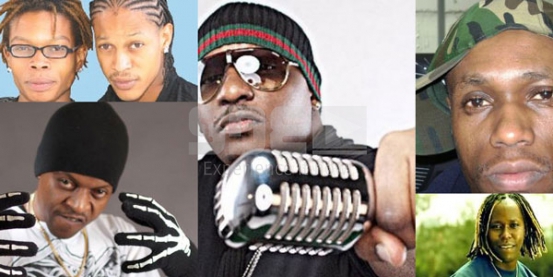 You have seen the images — Kenyan entertainers returning from their sojourn in foreign lands looking shattered, their dreams of a better life having been dealt a crippling reality check.

While their sendoff was marked with fanfare and partying, their return is only celebrated by family members and close friends.

They left at the height of their careers, but now hardly anyone recognises them. They had seen their names in lights and wanted a bigger stage, probably inspired by the likes of Akon and other celebrities of African descent who found fame in the most hyped market in the world.

For ages now music has proved to be a hard nut to crack for many new artistes. Making a mark in the now crowded local industry has never been, but as it turns out, not only new artistes get it rough trying to cut through but also big names in the game too.

In Kenya alone we have a bunch of such artistes who rocked at some point but are now nowhere to be seen or heard no matter how hard the try.

Gospel group Milele, who had a high-riding song then ‘Sanjolama’, among others, as well as all-girl gospel group Sita, famous for their song ‘Knees and Toes’, also left for USA.

And they kept on leaving. Ndarlin P of the ‘4 in 1’ song fame went to Australia never to be heard of again as was the case with gospel mega singer Henrie Mutuku, who went to the UK.

These are just some of the Kenyan musicians who took part in the mass exodus to the diaspora. And a lot more showbiz stakeholders moved, too, including fashion designers, DJs and event organisers.

It seems that not many succeed abroad, at least musically. And then when they get back, they have challenges trying to re-establish their brands as the industry churns out new styles and talents every month. Undoubtedly, when they are in the diaspora, they lose touch with Kenyan music, or at least what music fans want to listen to.

But the question remains, what happens to our entertainers abroad? Why do they disappear into thin air when they leave the country, and kill the huge brands they have worked so hard to create?

A good case study is former Ogopa DJs-signed artistes Longombas and all-boy gospel group Gospel Fathers. By the time they were leaving for the US eight years ago, they were household names and their songs topped local charts.

In fact, the last member of Gospel Fathers to leave Kenya, Kerra, did a song with Daddy Owen and Alan Aaron, ‘Kiriro’, which was a major hit. The Longombas, on the other hand, left their fans high and dry with their song ‘Vuta Pumz’, and are yet to have a hit that will rival it.

According to US-based Kenyan film-maker Benji ‘Bendrix’ Onyango, the Longombas are working in his music studio, which he had built for his daughter Idah Onyango, also a musician.

But it seems it will take a long time for the Longombas to really bounce back, judging by the songs they are currently releasing.

Former Kleptomaniax member Nyashinski who was probably the best rapper Kenya had also left for the US many years ago and is yet to prove his comeback.

Rumour has it that he is doing odd jobs to make ends meet. Although at some point it was claimed that he came back in the country and did a song – Kenyans are yet to appreciate him considering the tough competition within the local music industry.

The list of musicians who are coming back home after facing a cruel environment in the diaspora is growing every day. When rapper Abbas Kubaff came back to Kenya in 2005 after a two-year stint in Sweden, he talked of how harsh life was for an entertainer, saying he had to depend on other skills, like painting, to survive.

Ndarling P, after spending over eight years in Australia, is back in the country. When he left, his music was top of the charts, but he is yet to release a song after his return.

“I want to study the industry first before I release anything,” he says.

Former member of XYZee, Lexxy, has released two music videos since his return to Kenya, but they are yet to have any meaningful impact.

Rapper Bamboo is another Kenyan musician who has left many Kenyans asking questions. Coming from a musical family he managed to score masses with his club banger Compe during the good olden days. Victoria Kimani and Kimya Miyaki's elder brother was the don when it came to rapping.

Without notice Bamboo left the country to the land of milk and honey. On his arrival, he did some great jams and even did a collabo with Akon in a jam called Mama Africa.

But that was the last we heard of him as he went quiet only to resurface and clarify that he was focusing on business.

He jetted back in the country and this time, a saved Bamboo ready to go all gospel. But he was later to 'backslide' and got lost again.

Fast forward to May 2015 and here he is again, trying very hard to fit back but the fans were not really feeling his vibe. Today he is struggling hard to get back to his former position with a number of songs - his main comeback tune Too Much Potential - a jam that is about inspiring everyone to tap into their full potential.

Another potential singer Flexx famed for the songs Namba Yako, Kama Wanitaka, Nyundo and Amejibeba is one musician who has apparently sunk into a musical abyss never to be seen let alone heard.

The Sweden based musician who returned to Kenya in 2011 after five years in the musical backwaters told this writer that he was in the process of completing his new album recorded with Maich Black of Herbal Records and his producer in Sweden which was set for launch in September 2011 in Nairobi.  But almost five years down the line we are yet to hear something from him.